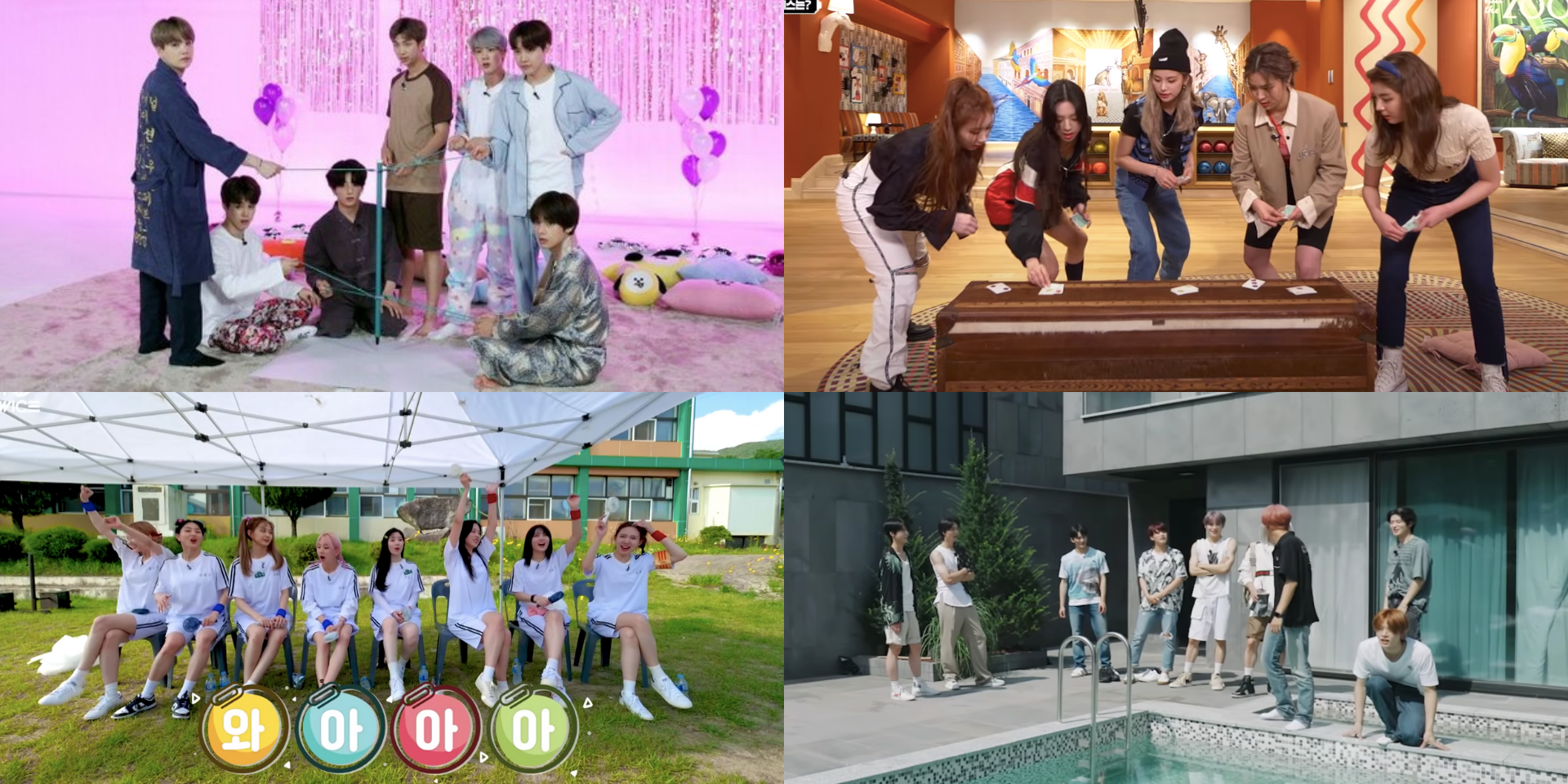 To the casual observer, K-pop stars are mythical beings wearing stunning outfits, dancing and singing against a flashy stage without even breaking a sweat. But, if you've ever ventured deep enough into the whirlwind of this music subculture to find variety shows, you know idols can be just as messy and chaotic as us mere mortals.

Variety shows are a great way to know more about your favourite K-pop stars, with many of them aiming to show a new side to these powerful performers. Many groups have their own variety show, either on YouTube and V LIVE where they show you a glimpse into their off-stage personalities while also undergoing hilarious challenges.

Check out some idol variety shows to watch below.

Where to watch: V LIVE

First launched in 2015, Run BTS! is a web variety show that stars the global pop group BTS. Taking the format of most Korean variety programmes, each episode sees the 'Butter' act go through a series of challenges, missions and games.

In the last six years and across 150 episodes, Run BTS! has seen varied themes from pajama parties to esports challenges (that even brought League of Legends team T1 to the show), arcade games and building IKEA furniture.

Okay, technically Jessi's Showterview is a talk show but with the chaos and hilarity it ensues, it's right up the alley of a good ol' variety show. Starring rap star Jessi, each episode invites "the hottest celebrities in the world" for an unforgettable interview.

In its run so far, Jessi's Showterview has seen the likes of TXT, TWICE, SHINee's KEY and Minho, Eric Nam, and even Hollywood star Emma Stone.

On stage, TWICE are renowned performers you can't help but be in awe of, but on their reality-variety show TIME TO TWICE, they're your typical group of friends who are unbelievably competitive (in the best way possible).

This is the group's second reality show, following TWICE TV, and sees the members participate in varied games, missions and challenges revolving around different themes.

Codename: Secret ITZY is a web variety show that premiered in 2021 to celebrate ITZY's second anniversary. Taking your typical variety programme format, the shows an alternative side to the members, who are usually fiercely dominating a stage, as they embark on several missions.

In its two seasons, we see ITZY do everything, from acing simple speed quizzes to going to great heights (literally) on a giant swing.

With 13 members, it can be hard to keep up with SEVENTEEN on the stage but with their reality-variety show GOING SEVENTEEN, you can get up close and personal with every single one of them.

Launched in 2017, the show started as a behind-the-scenes look into SEVENTEEN's off-stage lives, but as the years went by, the members started pitching their own ideas, inadvertently turning it into the hilarious and adorable variety programme we love today.

Across 100 episodes, GOING SEVENTEEN has seen the members tackle everything from heated debates to bungee jumping.

Henry's Carpool is one of the many series on Henry Lau's YouTube channel that you just can't help but binge-watch. A treat to watch and a delight to listen to, the web show is an alternative take to James Corden's Carpool Karaoke where the Super Junior member invites K-pop stars to perform their own songs and popular pop covers.

When you can't watch the members of NCT killing it on stage, you can catch them live their lives on their reality-variety show, NCT Life. Giving fans an insight into their offstage shenanigans while simultaneously putting the members through outrageous challenges, the show first premiered in 2016.

In the last five years, NCT Life has gone through several iterations and sees the members in various cities across the world. Starting its inaugural season in Bangkok, the show has since seen NCT in Osaka, Chiang Mai, and several towns across Korea.