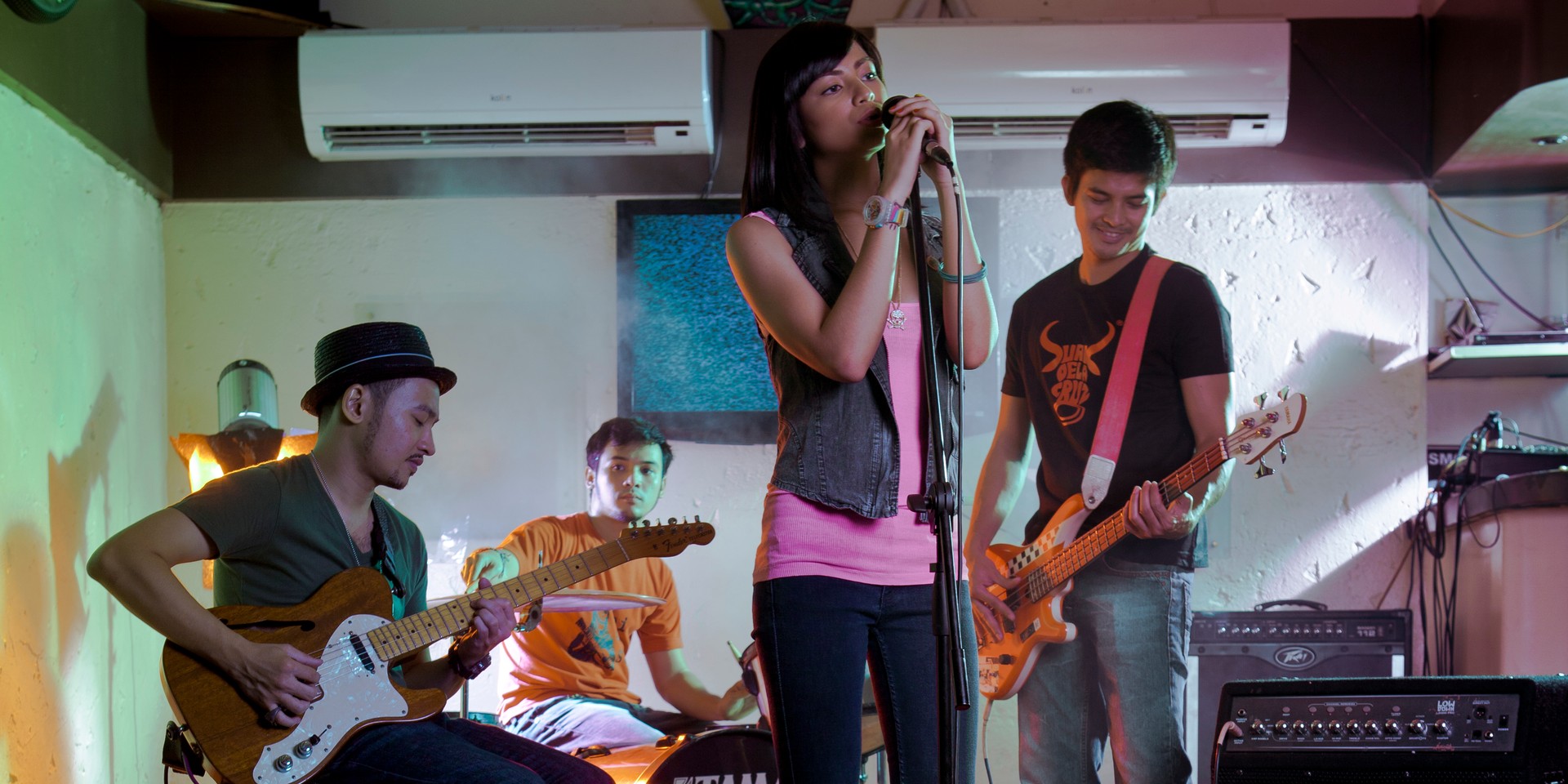 Rakenrol, a 2011 film that doubles as a love letter to the Filipino underground music scene, is celebrating its 10th anniversary this year.

While everyone is trapped indoors and gigs are pretty much non-existent, the Quark Henares-directed film couldn't have come to Netflix at a more fitting time than today (02/04). It will certainly transport fans and first-time watchers to the 2008-2010 when Mei Day was a thing at Cubao X, Admit One was the night to be at SaGuijo, everyone rocked emo bangs while tuning into NU 107.5, and gathered at defunct venues Mag:Net Cafe, Route 196, and Mayric's for a good time. "If just for a few hours we take you there, we’ll be really happy," Henares tells Bandwagon.

The Jason Abalos, Glaiza de Castro, Ketchup Eusebio, Alwyn Uytingco, Diether Ocampo-starring film, which was co-written by Sandwich guitarist Diego Castillo, offers a look at what it was like growing up in the mid 2000's. "As for the first-time watchers, I just hope they enjoy and maybe just maybe get inspired to go and be creative seeing a lot of the weird cast of characters in Rakenrol do go out and follow their hearts in terms of what they wanted to do in life," Castillo shares. 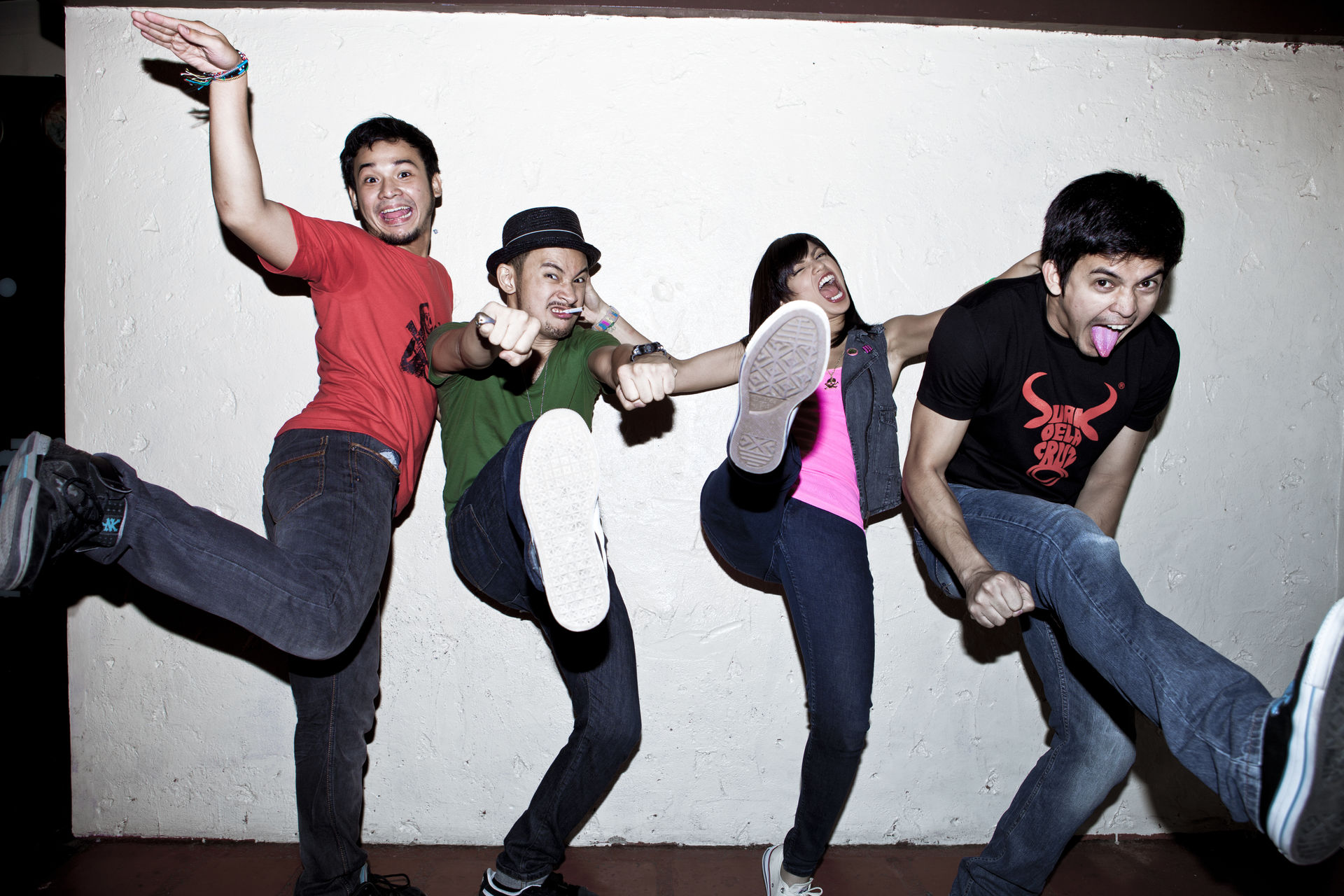 Being in the music scene themselves, Henares and Castillo curated the film's soundtrack with a mix of songs that moved them and were "easy to license" through friends like Chillitees, Urbandub, Pupil, UDD, Taken By Cars, Cambio, and Boldstar. According to Henares, one of the things that makes the local music scene special is how everyone's friends with each other. 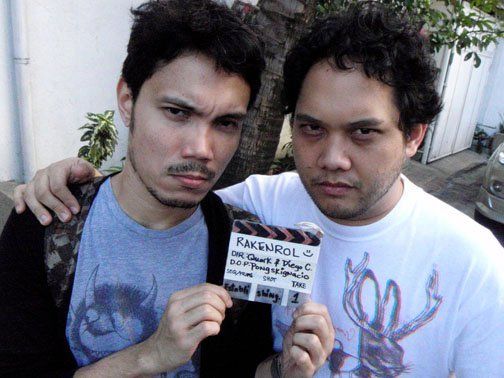 "Everyone plays in each other’s bands, everyone sticks around to listen to each other," he says. "Diego having toured with so many bands helped, as did our background as radio hosts on NU107’s Not Radio and Let’s Fun, as did me directing music videos for a lot of these guys."

On the other hand, Castillo confesses that they just wanted to work with their friends in the scene to represent them as much as they could.

Bandwagon caught up with Quark Henares and Diego Castillo to share stories about how the Rakenrol soundtrack came to be, the original music from the film's fictional band Hapipaks, and the people involved in its creation.

Quark: My memory is so hazy about this song! Haha. I do believe the title came first, though. Script stage pa lang it was there already. And we were having a hard time writing it, but Diego Mapa eventually came up with some lyrics. In fact, in that scene where Irene finds the SFI CD and listens to the songs for the first time, you’re actually hearing Diego Mapa, not Jason Abalos. There’s another song called 'Alaala', and Mong Alcaraz wrote that. Grabe Hapipaks! Star-studded ang songwriters. 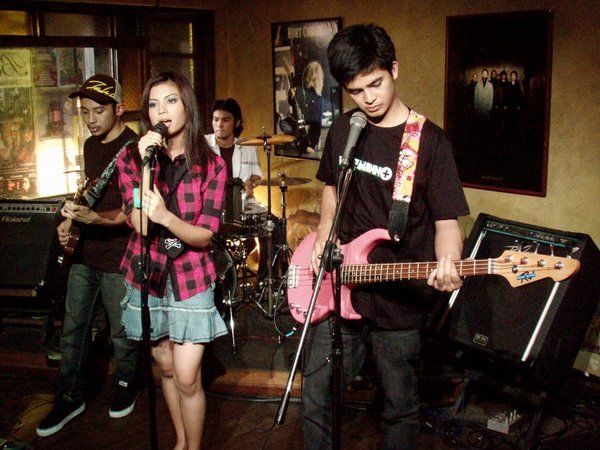 Diego: These tracks were written by the awesome duo of Mong Alcaraz, (who does a cameo in the film as part of Jacci Rocha’s band Baron Munchaüsen) and Mikey Amistoso and I also did the music with Mong for 'Oplan Pagibig' at Mong’s old house in Katipunan. 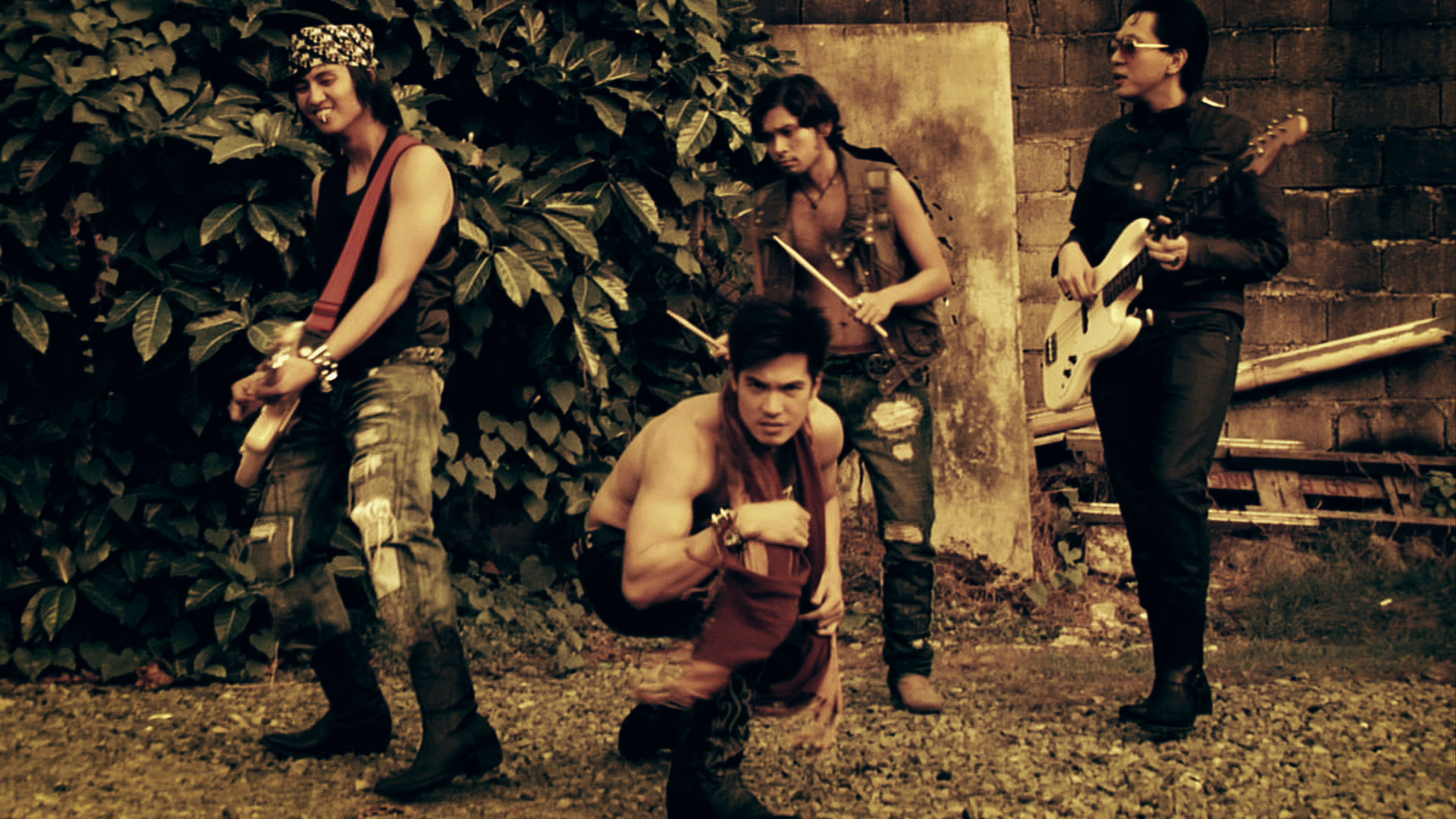 'Baka Kailangan' has that Mikey vibe, while 'Alaala' has Mong’s fingerprints all over it.

Quark: So I wrote this verse and Mikey Amistoso did the chorus. Except it’s obviously ripped off from some other song somewhere out there, haha. You guys decide which one. The lyrics were inspired by the ex-station manager of NU107, Ron Titular. He was telling me and Diego one day about seeing drawings on the walls of his house. He got so furious, so he started shouting “Sinong Ginawa Ito?!?!” around the house. He grew up in the States, so his Tagalog wasn’t good. But the way he was reenacting it had so much drama and fury that we were both trying to hide our laughter. 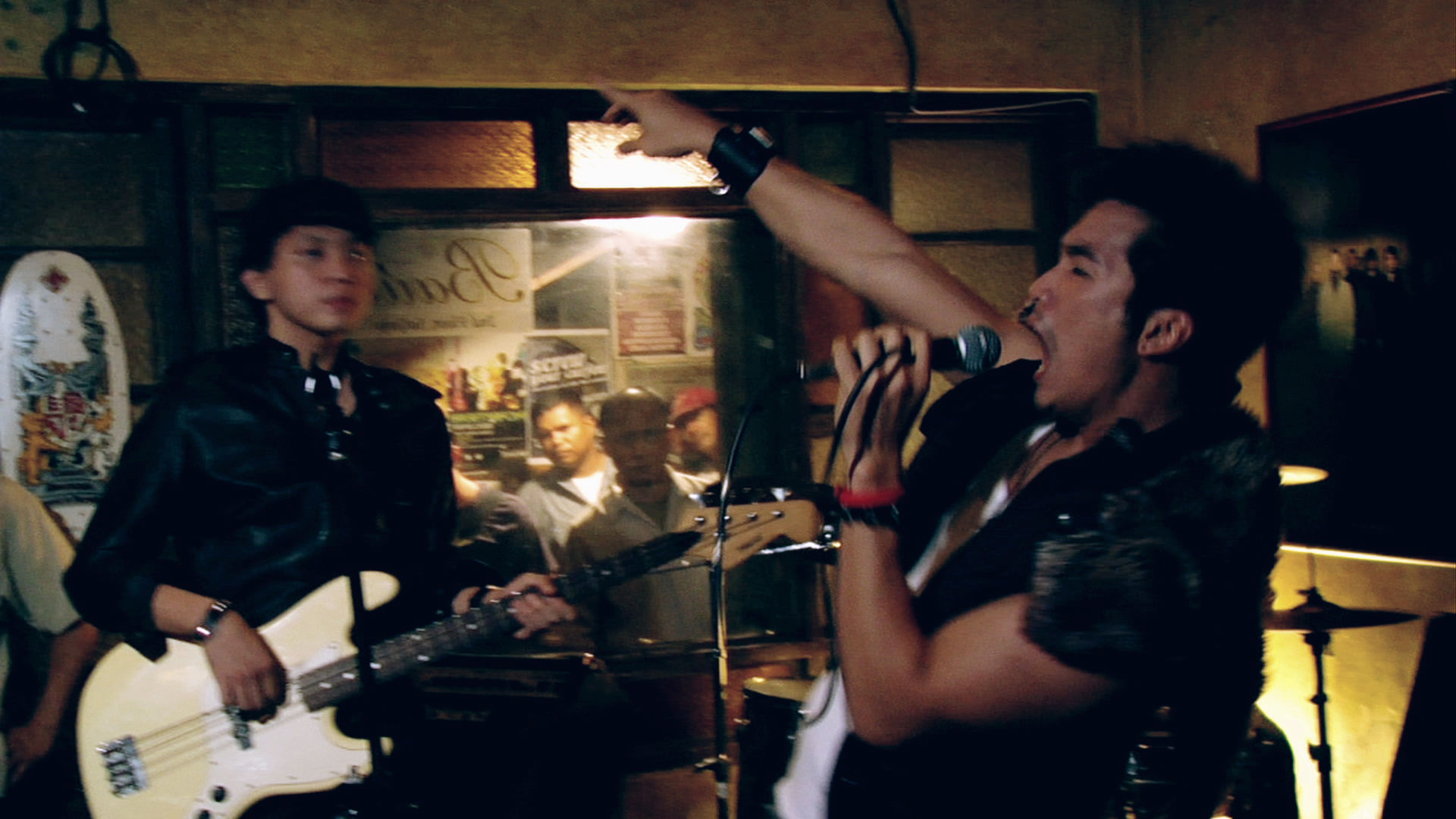 Oh! And we actually shot the “music video” before the song was recorded. Wincy Ong (Us-2 Evil-0, Patience Dear Juggernaut), Bogs Jugo (Pupil, Daydream Cycle) and Mong Alcaraz (Sandwich, Chicosci) were the backing band of Baron Munchaüsen! And we were making up the lyrics on the spot and I was trying to figure out what to put at the end of the verse, the “nanananananana” part. And then we figured that Jacci Rocha would just give up writing the song and literally sing “nanananananana," hahaha.

Diego: This was always an old joke that Quark and I used to say on our old radio show on NU called Let’s Fun. It was a line an old boss of ours once said when he came across some vandalized equipment. Hahaha! So Quark and I immortalized it via Baron Munchaüsen! I know I have a video of Quark, Diet, and I recording the song in the studio. I should dig that out! 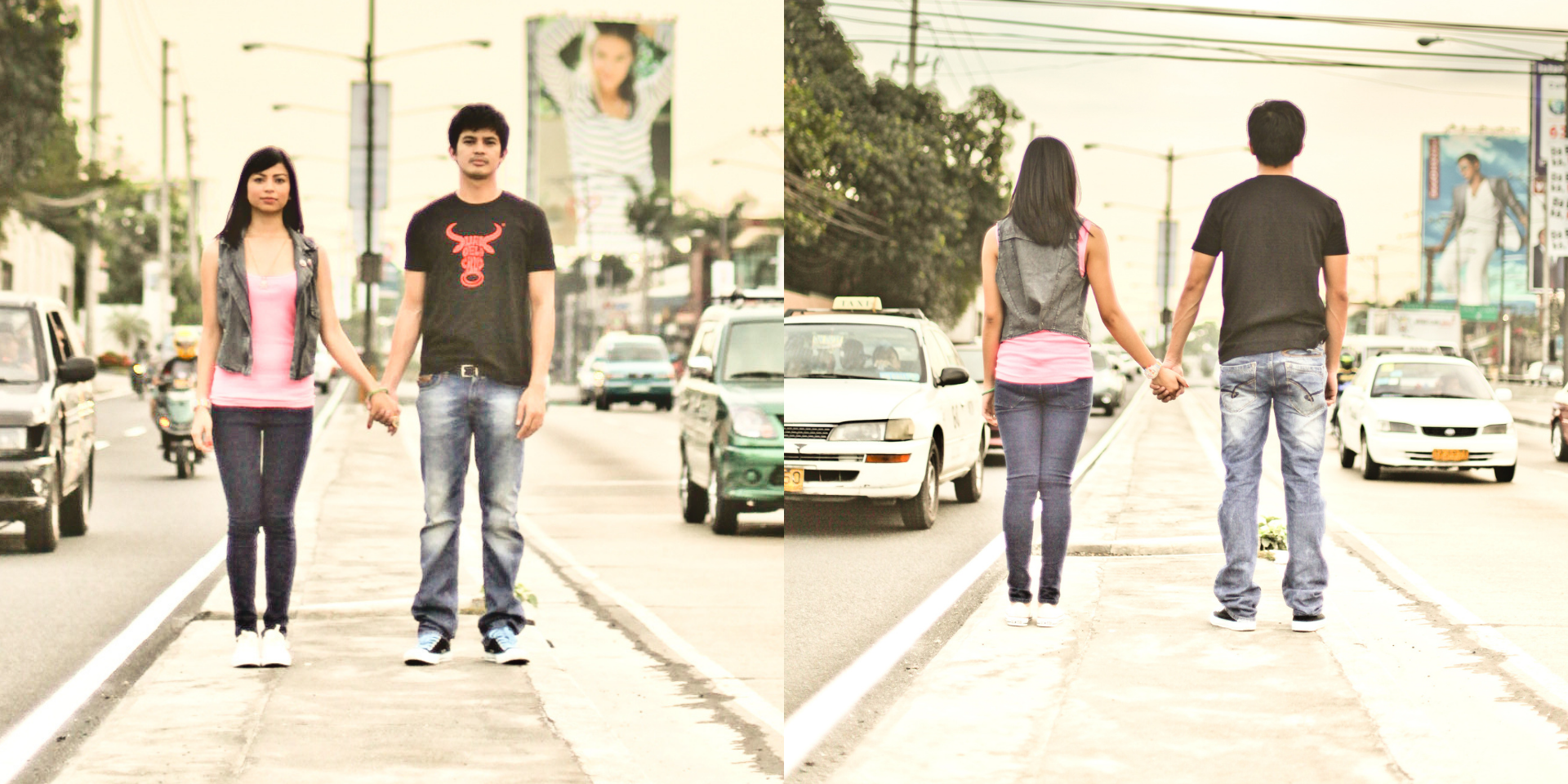 Photo by Everywhere We Shoot

Quark: Last-minute save by Mikey Amistoso of Hannah + Gabi and Ciudad! We needed one final song to finish off the film, and I wanted something poignant that spoke of what the Odie and Irene relationship was about. None of us could even think of lyrics or a tune, and so I asked Mikey to take a crack at it. The result was this beautiful and poignant reflection on acceptance and moving on. And when Glaiza put her vocals in, it was breathtaking.

Quark: We just wanted an Urbandub cameo, so we thought “if this is in the mid-2000s, the band Odie falls in love with Irene to has to be Urbandub.” So imagine Diego and I writing this in 2005, and finally shooting this in 2008. We didn’t know which song Dub would do, and they started doing 'Gone'. And EVERYONE in Mayric’s rushed the stage.

Alwyn and Ketchup covered their faces with their shirts like ninjas so they wouldn’t be recognized because they would be introduced later in the film. The crew was moshing. The extras were getting into it too. And I remember just being overwhelmed and crying, because we were finally doing this film. And I look over at Diego and he’s crying too! And we hug like fools, crying. That was my favorite moment making this movie. It was actually magical.

Diego: Quark and I were always huge fans of Urbandub and I myself have been friends with them since they were based in Cebu. They were at their peak when we were making the film and we were fortunate to get to play in the Mayrics scene.

Quark: I really love this song. I love it so much it’s in two of my movies. It first appeared in Super Noypi, in a scene between John Pratts and Katrina Halili, but I was so unhappy with that movie I wanted to give the usage of that song a second chance.

Diego: Another great track that was a perfect fit for the movie… 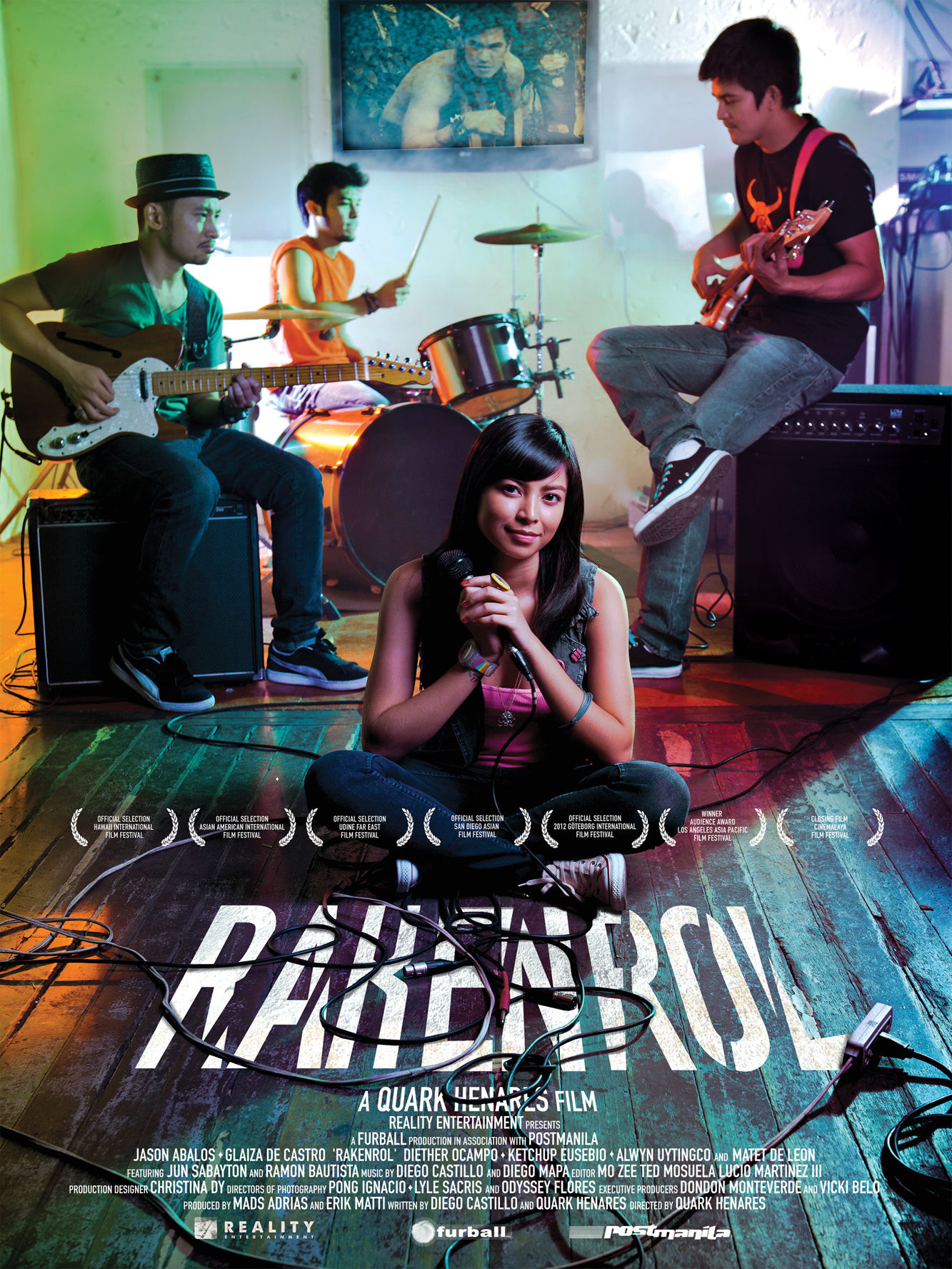 Quark: Speaking of Super Noypi, I remember listening to this song ALL THE TIME during the making of that film. We played it a lot on set, and I really, really loved it. And this might be TMI, but I would actually jump and dance to that song in the privacy of my room like Irene and Odie did.  It had to be that song for that moment, which was the quintessential Irene moment for me.

Diego: Another of Quark and I’s favorites. Not to mention being good friends with all of them. It’s my personal favorite from the band and was actually pitching to do the video for it, But alas… hahaha

Quark: Was 'Oo' still in the film? I honestly don’t remember. But this song, my favorite Pinoy song of the 2000s, meant the world to me. I was in love with someone and I’d play this song on loop while I cried about her, lol.

And there’s a deleted scene where Odie, Jason Abalos’s character, has the same ugly-cry-singing-at-the-top-of-your-lungs-while-driving kind of moment. I think we cut it to save on time. Still love that scene though, and maybe I ended up trying to find some other place for 'Oo' in the film.

Diego: It was perfect for the “urban loneliness” scene!

Quark: I managed Boldstar, back in college. And Marie Jamora, the drummer/vocalist and director of Ang Nawawala, is one of my best friends. I needed to have Boldstar in this movie.

Taken By Cars - ‘A Weekend Memoir’

Quark: I love Taken by Cars, and their first album was my favorite album of 2008. We had finished shooting by the time this song came out, but I really wanted it to be in the film.

Since the soundtrack was planned out from the beginning, we had a hard time figuring out where to place it where it would still feel important. And then I realized Irene didn’t have a ringtone yet. So it was great, having Sarah Marco screaming “HEART-STOPPING LOUD” to cockblock Jacci Rocha.

Quark: My tribute to Glaiza. I think in the original version she was just dancing weirdly to no music, but by the time we made the final edit she had acted in the music video of Pupil’s 'Disconnection Notice' for me. In it, she plays a futuristic prisoner who’s prone to fits of Ian Curtis-type manic dancing. So when I saw her do it in the film, I was like “there’s no way we’re not putting 'Disconnection Notice' in here.”

The Rakenrol soundtrack is now streaming on Spotify and Apple Music. Listen to it below.