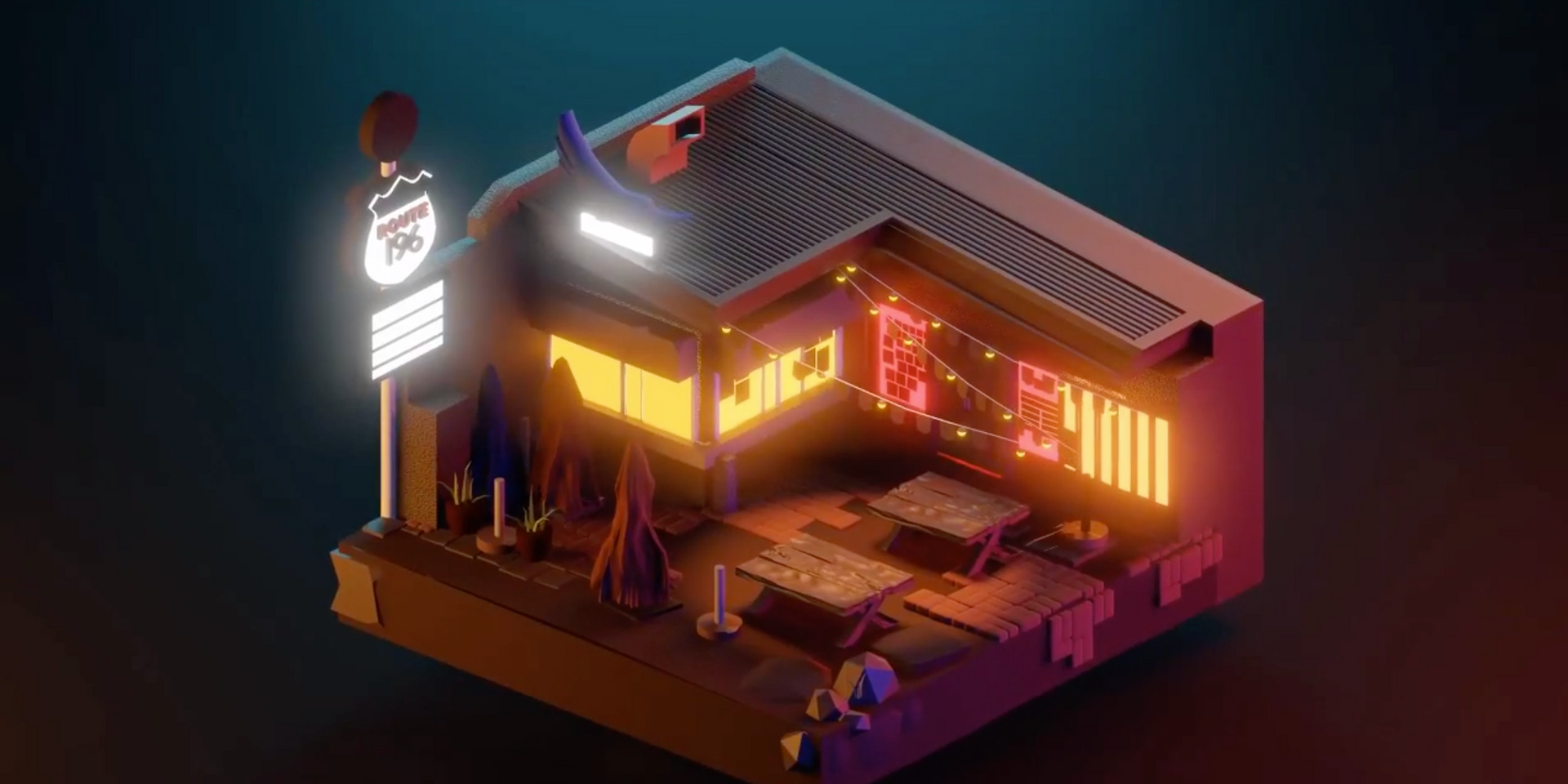 Route 196 threw its bittersweet farewell and fundraiser gig online this past weekend.

As hard as it was to say goodbye, it had to be done. On Saturday (09/12), the Katipunan live music venue held its last hurrah online with a livestream event that lasted over seven hours. The online gig follows Route 196's announcement that it would officially shut its doors due to the struggles they faced from the ongoing coronavirus pandemic.

Final schedule for today! See you all on our Facebook page for #OneForTheRoad 😭😭https://t.co/kvY7R7Ftj2 pic.twitter.com/HbfmzZffkS

Between sets, members of the music community expressed their sadness and shared some fun memories in a compiled video. An artistic 3D model of the venue, created by live music photographer and Route 196 regular Paulbrai Tubera on Blender and Photoshop also appeared. 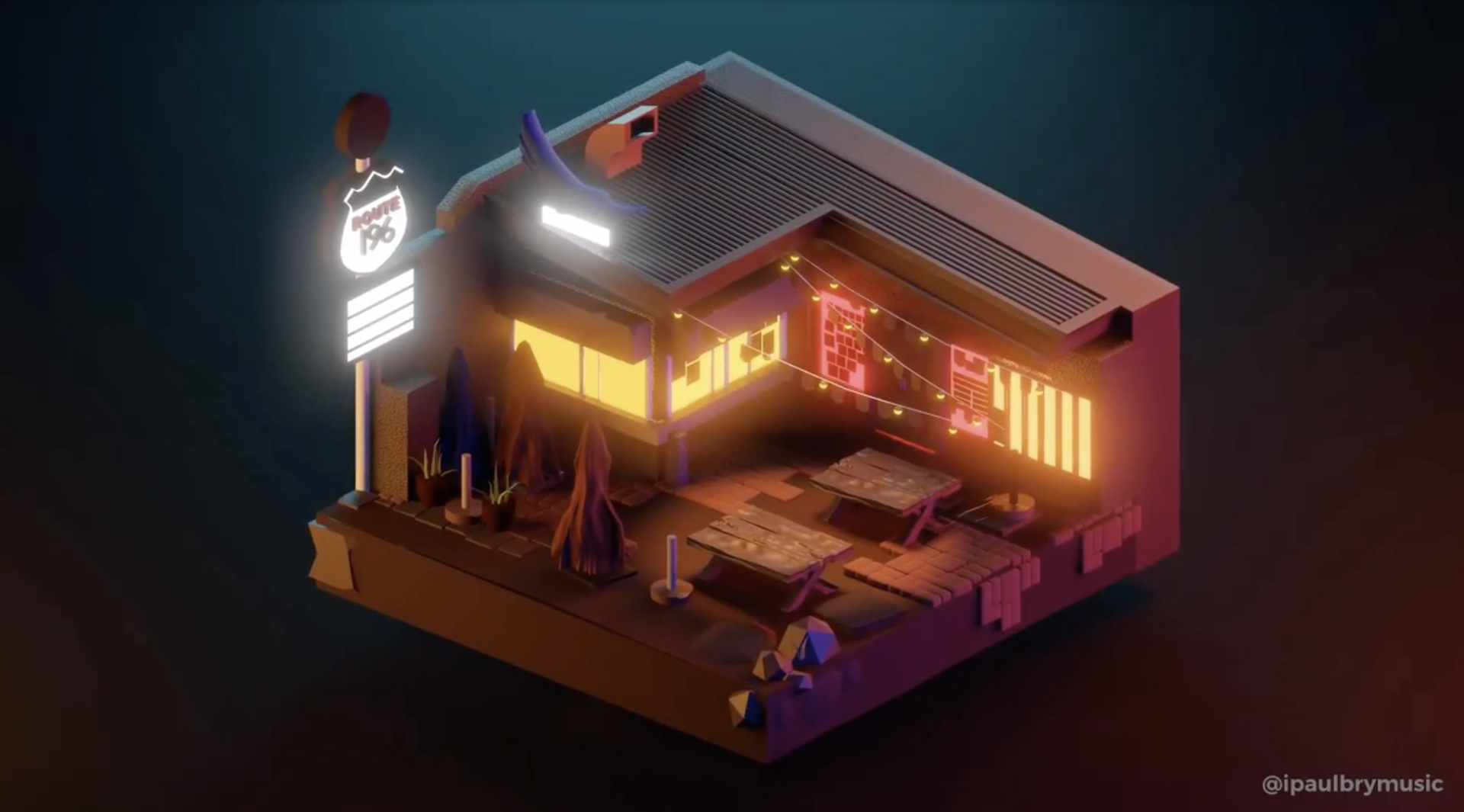 It is part of his ongoing project where he recreates low poly 3D models of gig venues in Metro Manila. You can check out his work here.

"I was part of Red Ninja Productions when I first started in the gig scene and Nicole [Sarmiento], the founder of the prod was a co-owner of Route. So it's common that I am there every gig," Paulbrai tells Bandwagon about how he first started attending gigs at Route 196. 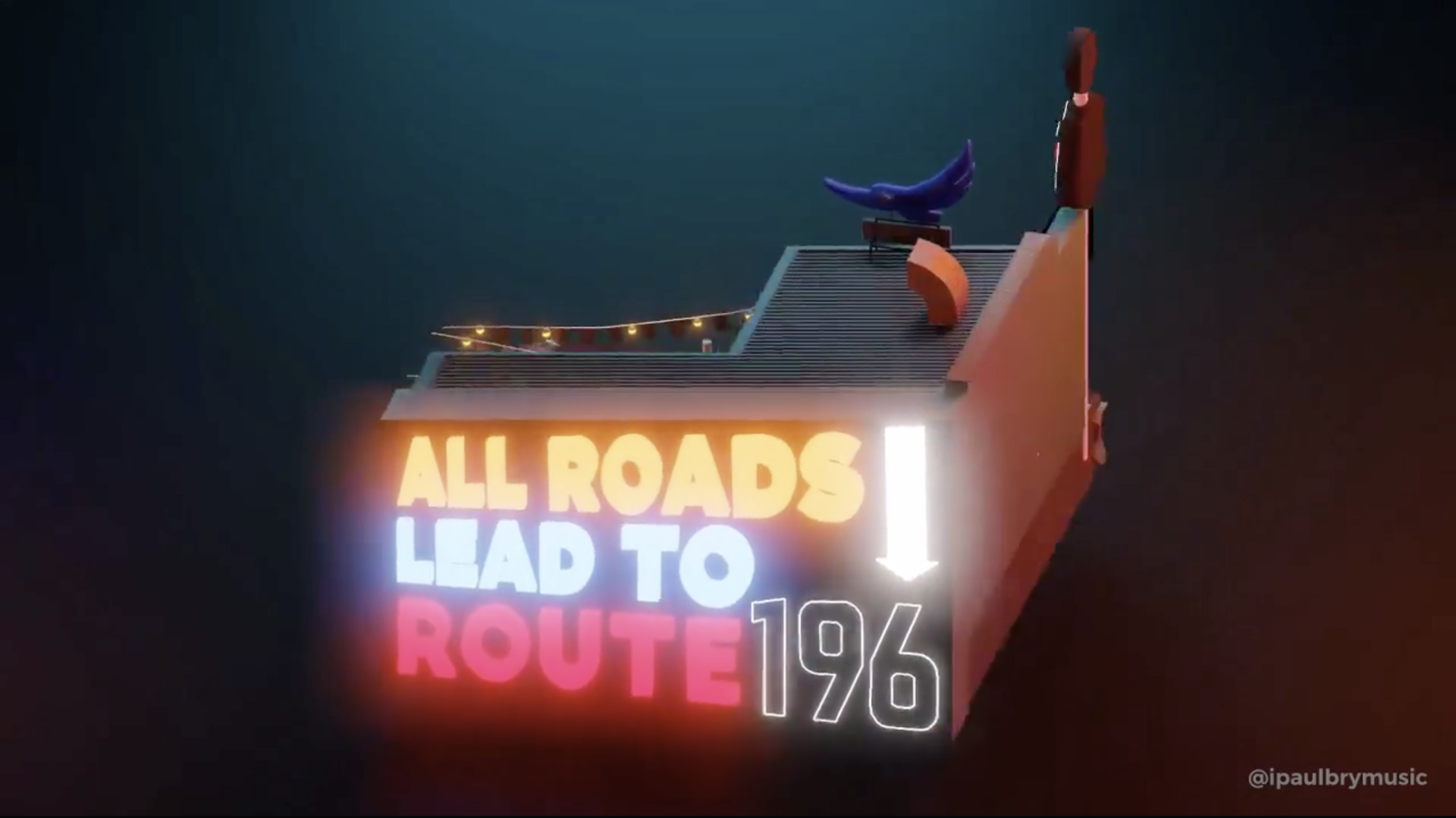 In July, Route196 also got a makeover on Minecraft by Tep Espiritu, Mark Ortiz, and Iñigo Pelonio, who shared a virtual tour of the venue on the sandbox video game on Twitter. It popped up on Minecraft again for the farewell gig, with a brighter and more nostalgic feel for gig-goers. 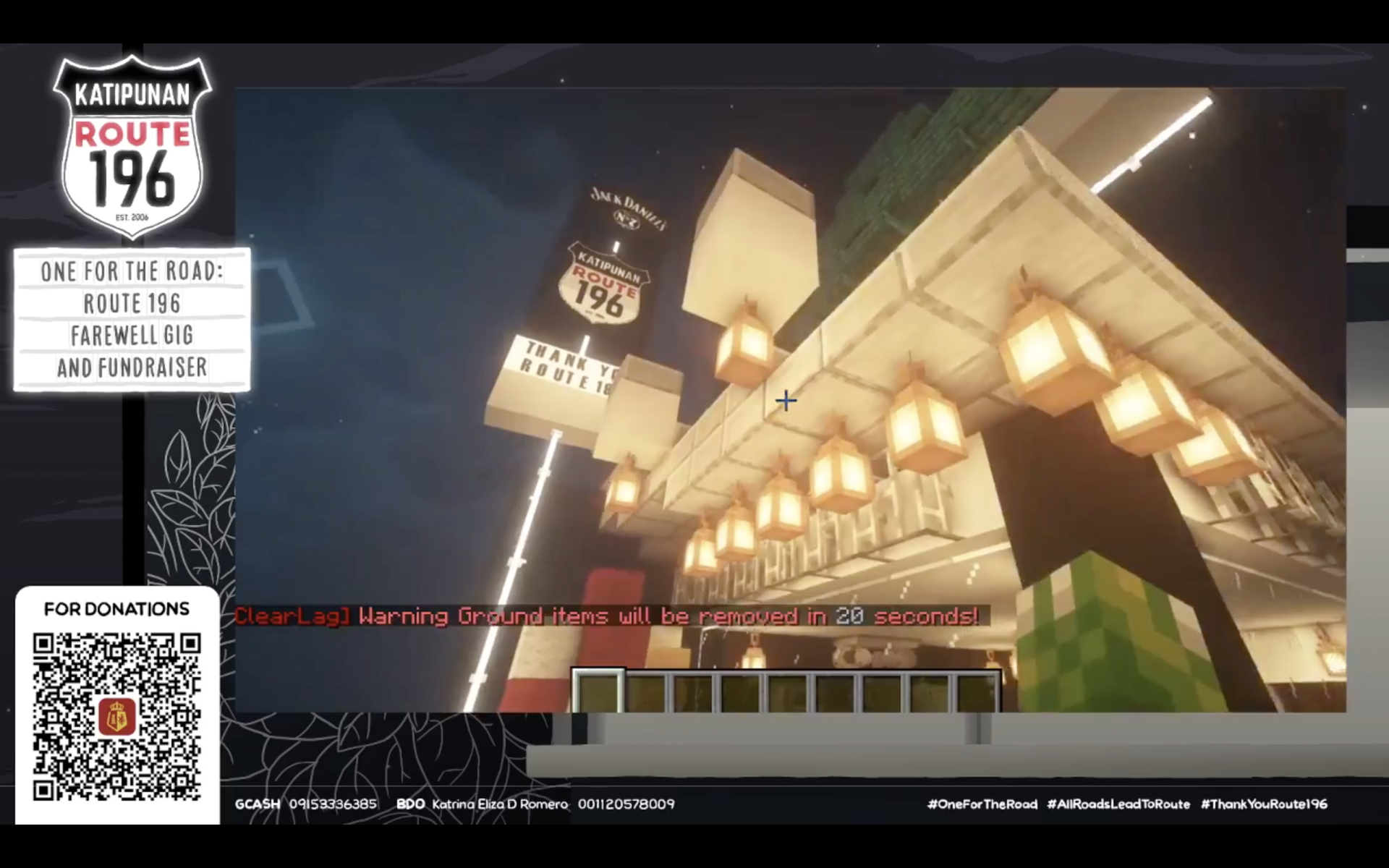 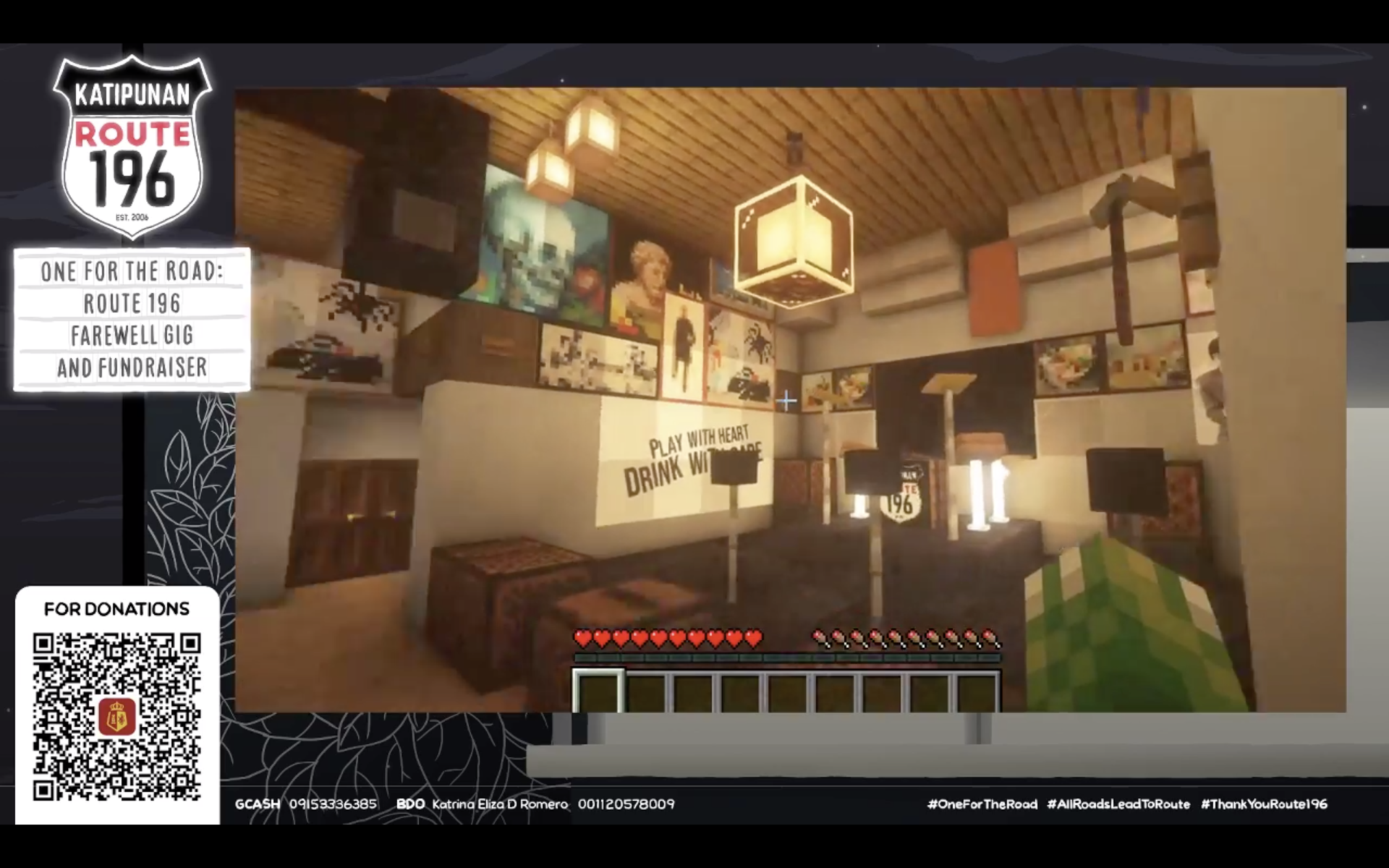 Check out some highlights from One for the Road below: 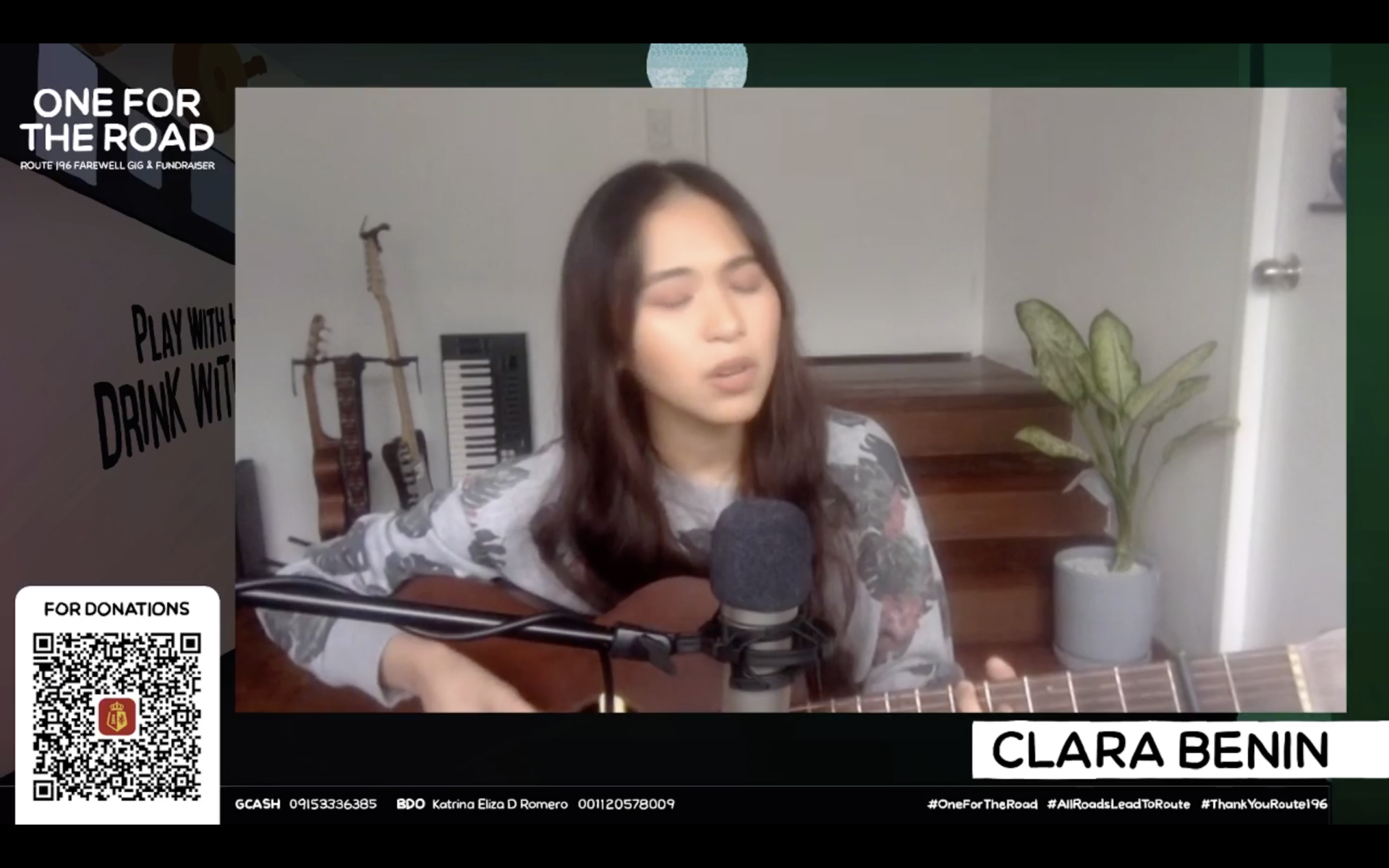 Clara Benin urged viewers to donate to the fundraiser during her set, before playing her crowd-favorite song 'Wine.'

Wake Up with Jim & Saab 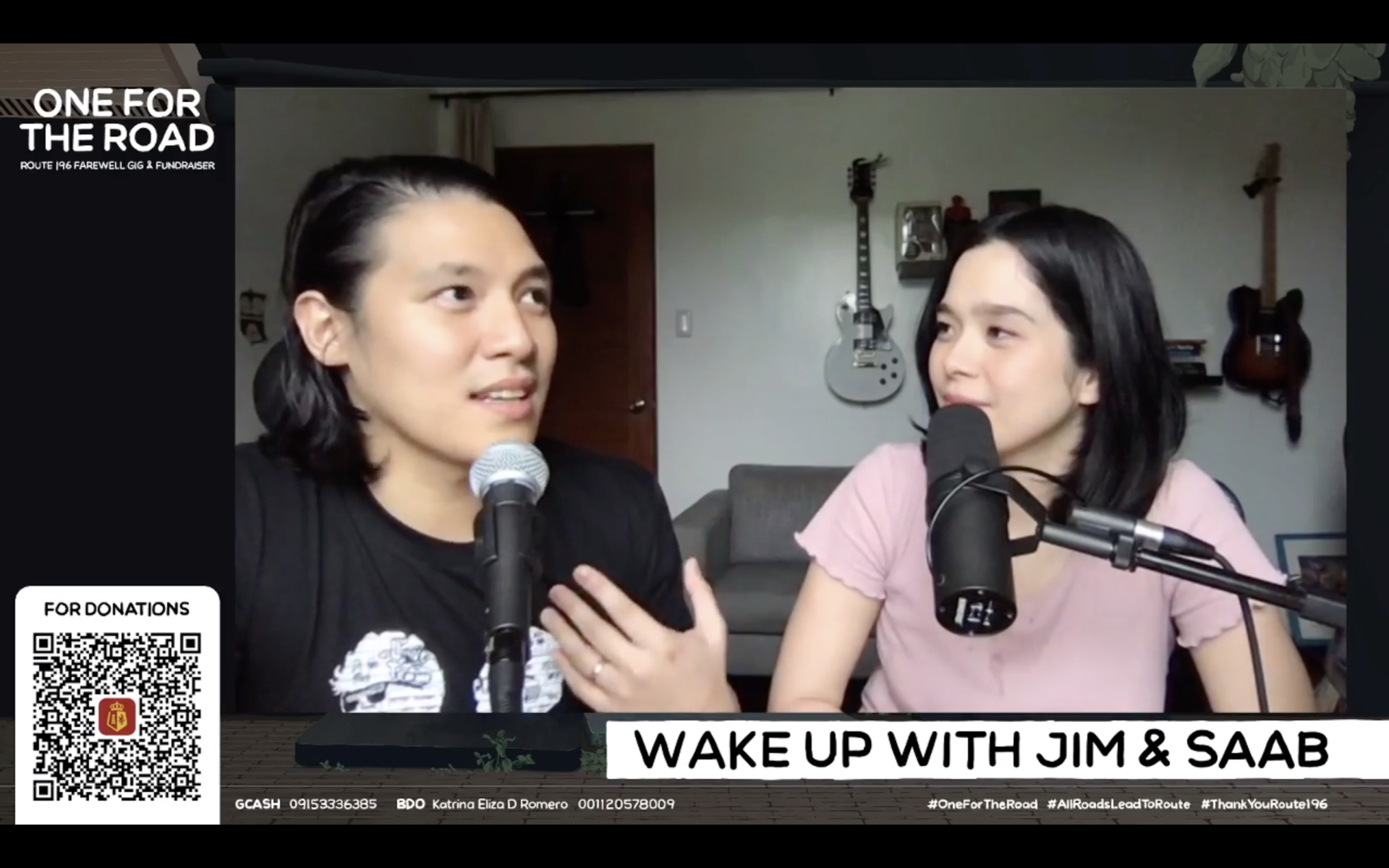 Cheats' Jim Bacarro and Saab Magalona-Bacarro shared their podcast Wake Up with Jim & Saab at the farewell gig, where they talk about Route from their single days.

"I'm pretty sure it's coming back," they say, as long as no one takes the space. And if anyone does, the couple will make sure to drive them out, they quip. "Just give us the fucking vaccine, we're good. Babalik ang Route." 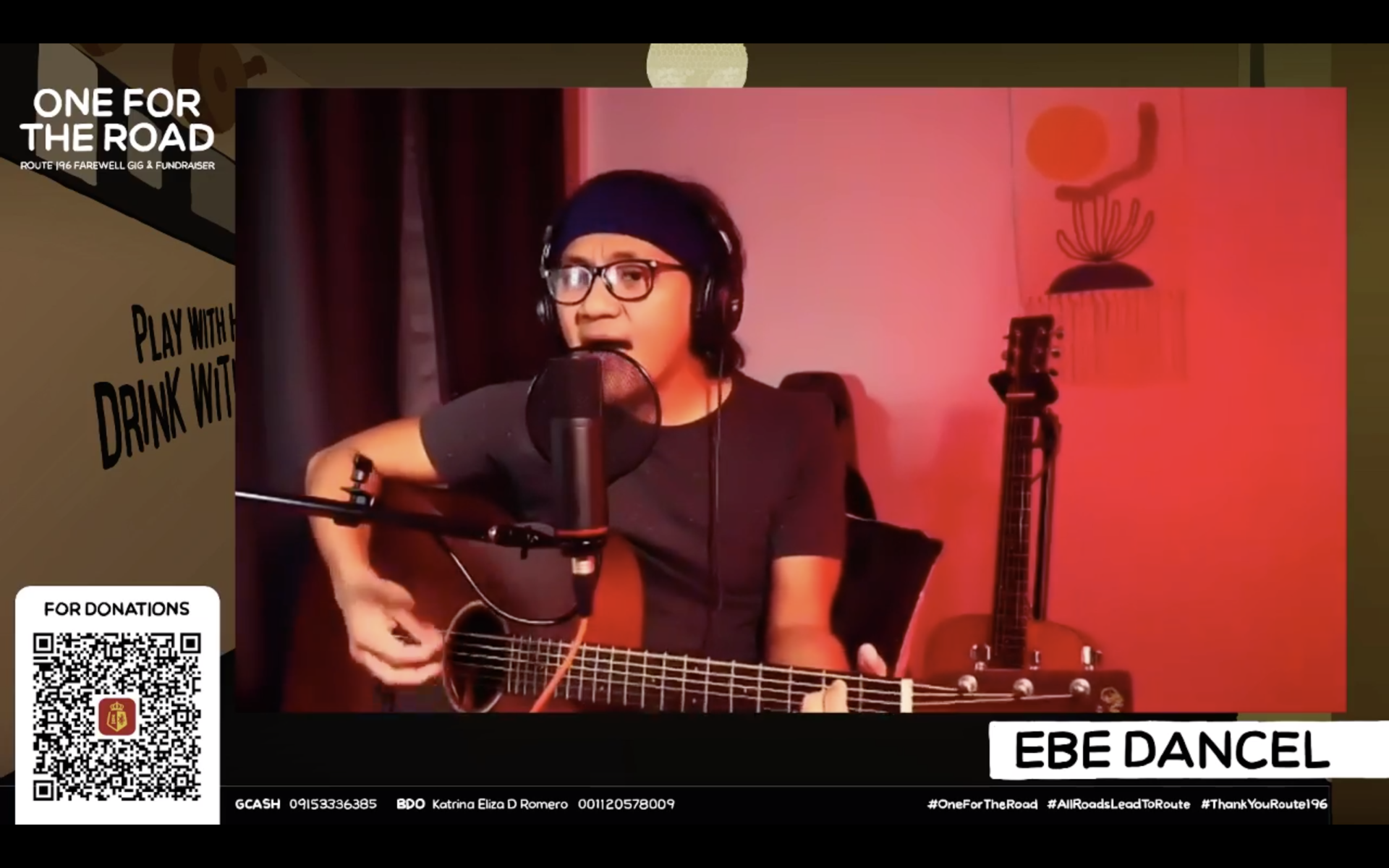 During his make-believe "album launch" set, Ebe Dancel recalled some good times at Route 196 and announced that his latest studio record Baliktanaw has been pressed to vinyl. It will be available soon. 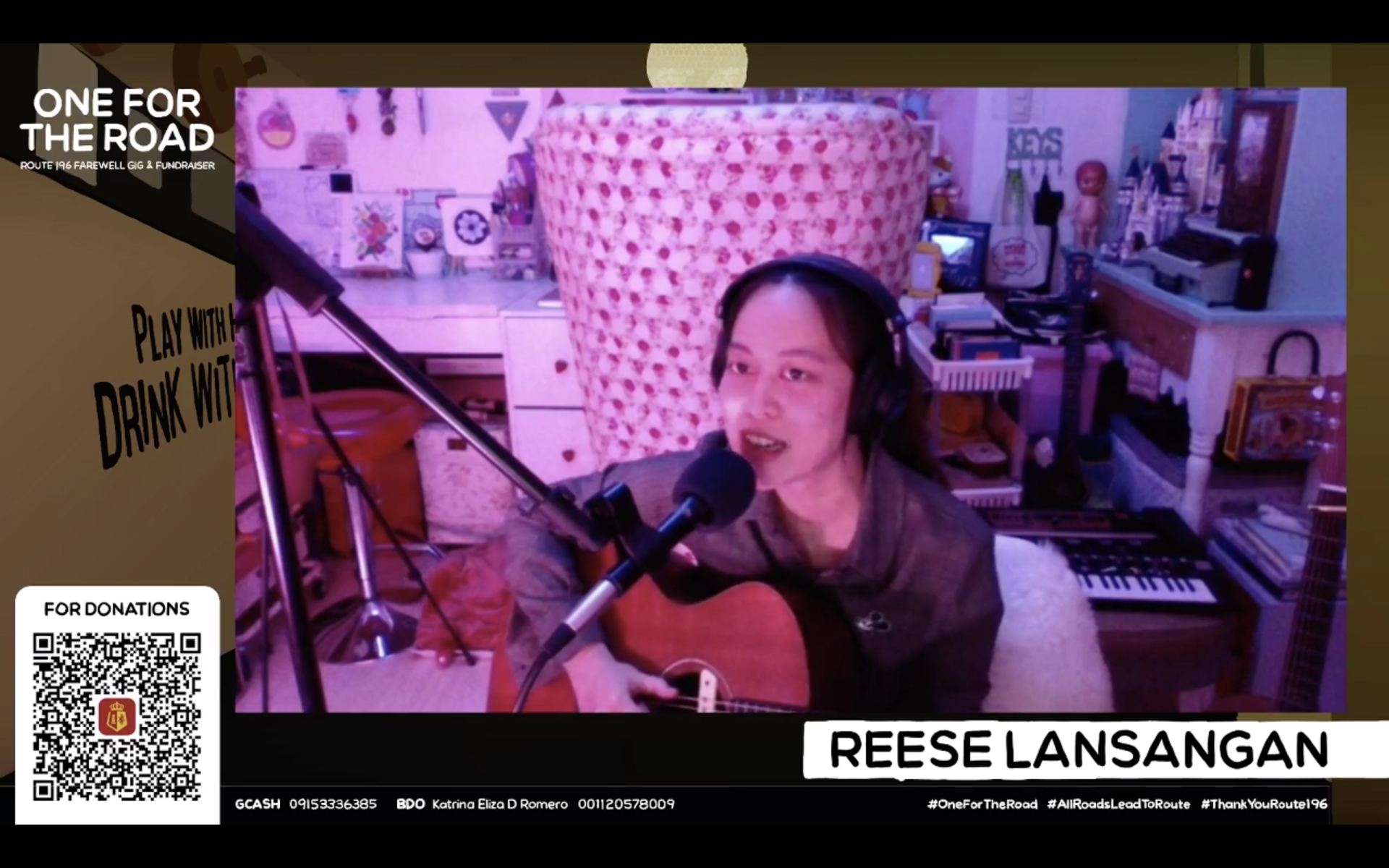 "It's cool we get to do something like this," singer-songwriter Reese Lansangan, who first started going to Route 196 in college, says right before her set. "I'm happy to be one of the artists to play and celebrate the legacy of Route 196, kasi sobrang institution na talaga 'to. You never really think about doing a gig to celebrate this kind of occassion," she says. 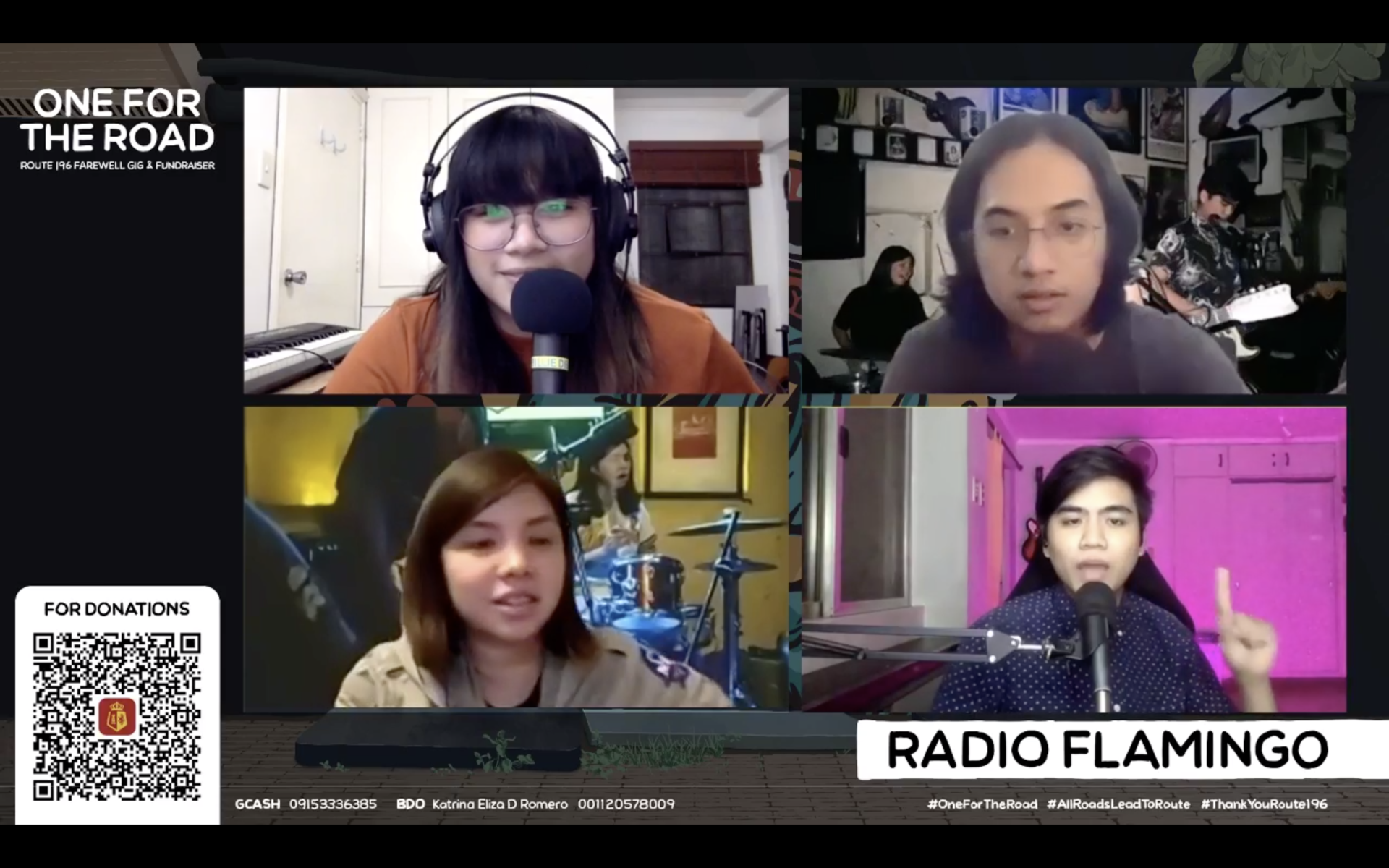 Oh, Flamingo! appeared at the farewell and fundraiser gig as Radio Flamingo, and recalled some of the most epic moments they experienced there through the years. 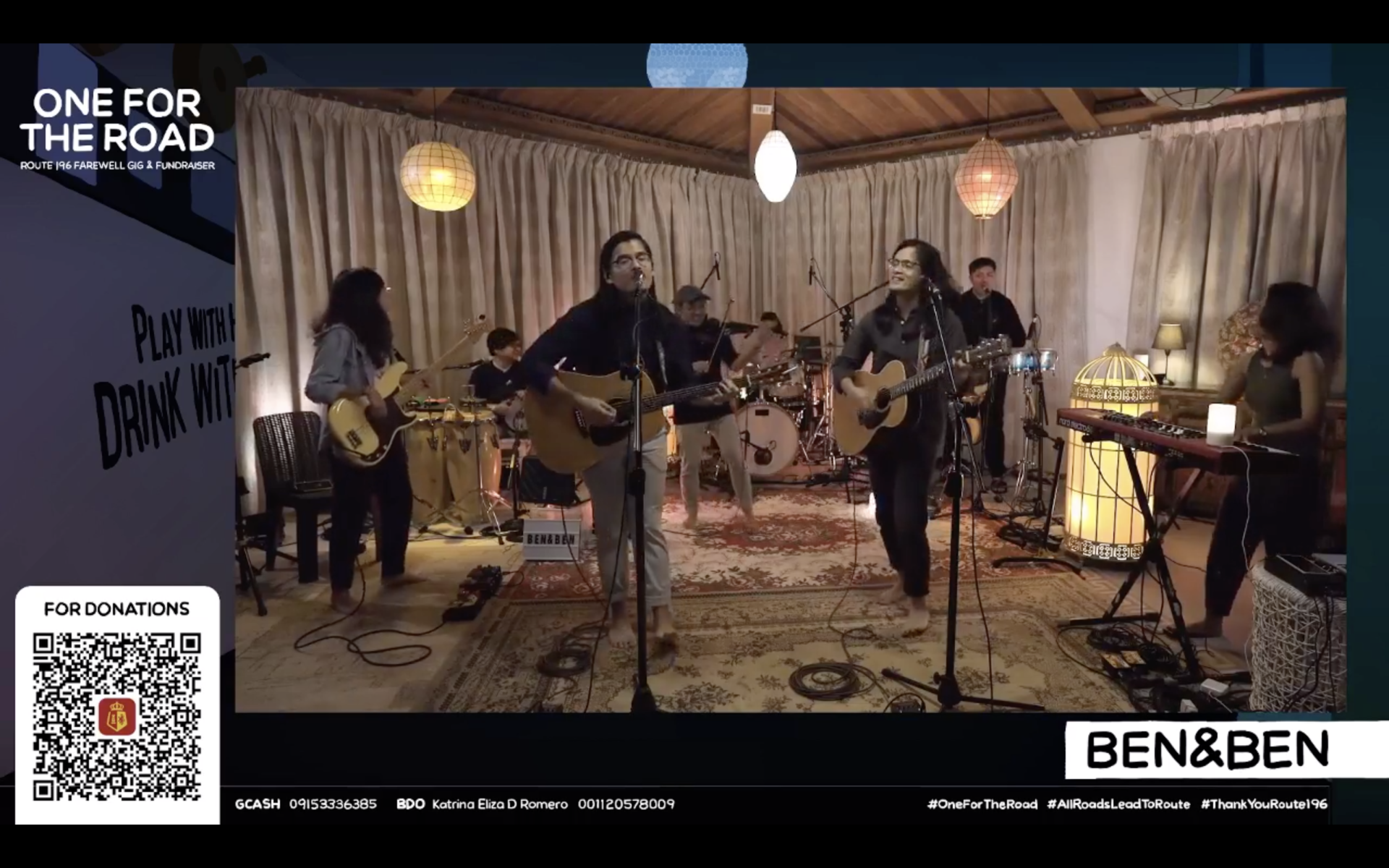 Ben&Ben took viewers to their secret base by the beach for their set. Their performance was captured by their video team, Jorel Lising and Karen Dela Fuente.

She's Only Sixteen took over Route 196 one more time to cap off the night as the last band to ever perform at the venue.

Following their set, the band shared the official music video for their single 'Currently,' which features clips from their most unforgettable shows at Route 196. Check it out below.

Proceeds from the multi-artist gig, which was directed by Deej Fabian and April Hernandez and produced by Red Ninja Production and Kerplunk! Studio and Productions, were donated to Route 196's staff and crew.

Watch One For The Road here.