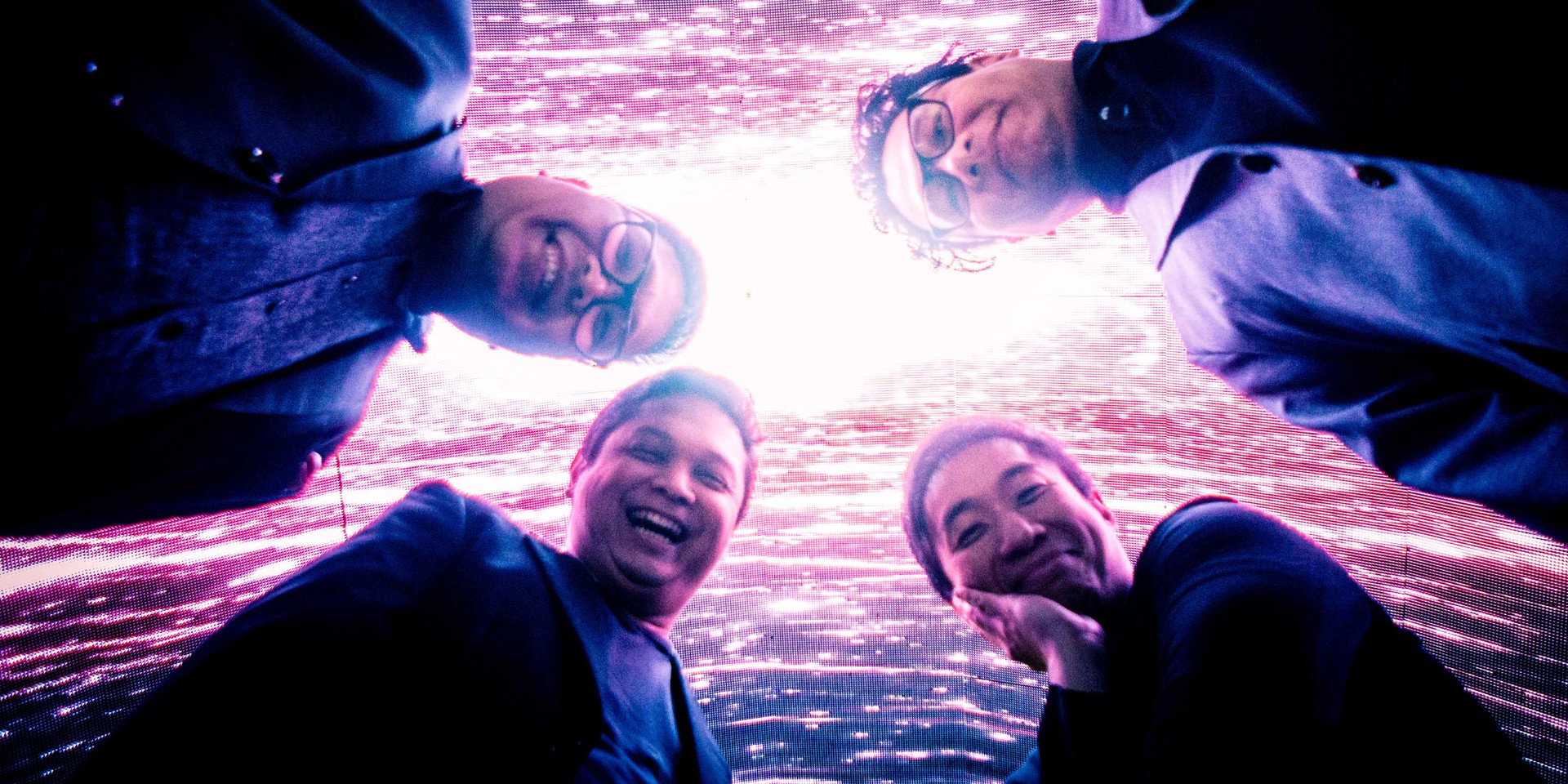 The Itchyworms are ready for the end to start.

After nearly half a year in lockdown, the Filipino rock act dropped their latest record Waiting For The End To Start on Tuesday (08/18) via Sony Music Philippines. The 9-track offering is the 'Di Na Muli' quartet's quarantine album, which they'd written and recorded separately as they followed health and safety guidelines due to the coronavirus pandemic.

"The songs in the album talk about different personal stages in experiencing the end of the world or the pandemic atmosphere of our times," drummer/vocalist Jazz Nicolas tells Bandwagon.

Guitarist Chino Singson adds that the songs on this record are "probably [Jazz and Jugs Jugueta's] strongest songs to date." He says, " Each song they've written for this album is a gift. They provided many of the guitar melodies you hear in the songs in WFTETS, so it was a joy to play such memorable lines on guitar."

Bandwagon caught up with The Itchyworms to run through the tracks off Waiting For The End To Start and the stories behind each track.

Chino: Jugs had the idea of unearthing the demo we recorded in 2005 (around the time we were writing songs for Noontime Show). We recorded this in the early days of digital recorders on a Korg D16, where we had to optimize the hard disk after every take, to save on space. That Korg recorder is the same one we used to record the demos for songs that would become Noontime Show. 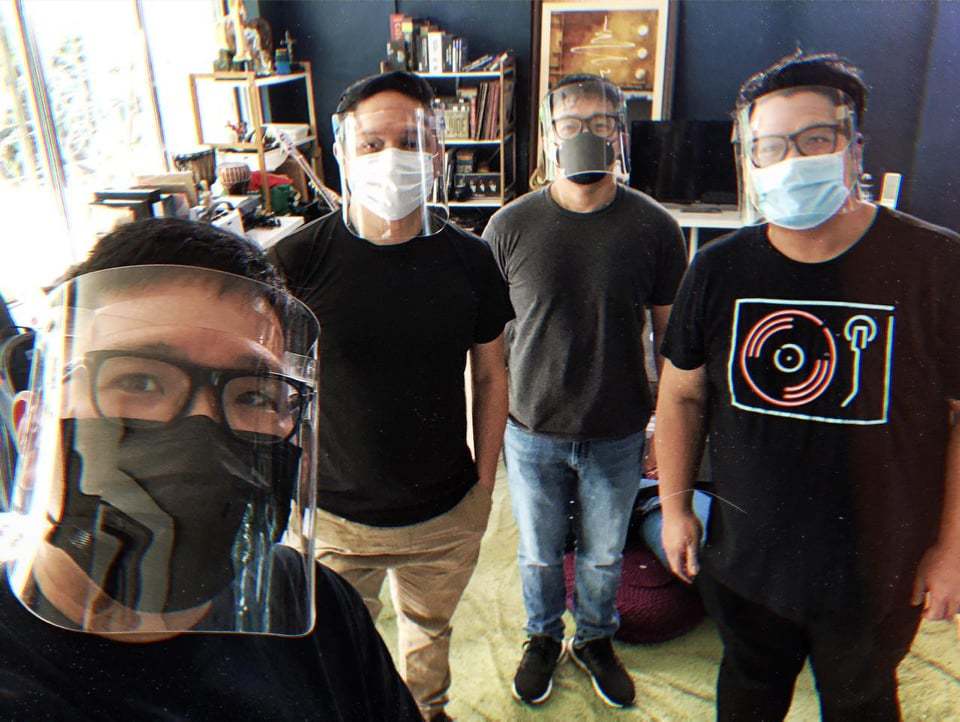 Band back at Big Baby Studios after 111 days. First time to be in a room together since the start of quarantine.

Kelvin: An old song from 2005, this is quite a fun straight up rock and roll AC/DC-ish song that’s really fun to play and an upbeat and carefree take on the end of the world. Something you can easily listen to to start your day.

Jazz: Medyo masaya pa. Tongue in cheek humor. It talks about what priorities you have when you find out that the end of the world is coming.

Chino: I will not lie, just the demo of 'The Silence' got me emotional. This was the first of our quarantine recordings for the new album.

Jugs: 'The Silence' is about the abrupt silence that happened when the ECQ started. As a musician and a TV host, my life was very noisy (but in a good way). Then in one quick snap, our lives changes instantly. This song is about the deafening silence of quarantine life.

Kelvin: One of the more “serious” songs on the album, written by Jugs while we were all locked down inside our homes. The music video was directed by our dear friend King Palisoc. The music video to this song is a collection of crowd sourced experiences of people during the early months of the pandemic. I think this is one of the strongest songs on the album, it’s raw, straight to the point, and hits home.

Jazz: This is when depression suddenly hits you about life at home becoming a sort of prison.

Chino: I love the experimental interlude. I kind of got to stretch my guitar muscles on this whole song. Clue: listen for the backwards guitar.

Kelvin: I loved the production process of this song—all our parts were done remotely and sent to Jazz, who worked his magic and put everything together. This song represents a new sound for us, an electronica-ish type of sound that features a jam part, which we rarely have on our songs.

Jazz: This song speaks about the endless cycle of our days that seem almost identical. You can’t tell one day from another ever since we got stuck in our homes. No clue whether it’s a weekday or weekend. The different musical flavors represent the futile attempts to make each day different, but it still ends up the same

'Give Me A Love Song'

Chino: Years ago in college, in the open forum portion of a music seminar by the Ateneo Musicians' Pool, I asked Francis Reyes "How do you approach a ballad?" He said, "very carefully." I'll never forget that. Jugs had already played a guitar solo in his demo of 'Give Me A Love Song,' and initially I declined to add my own part. Jugs just said "yours will be better." So I took that, and Francis Brew's admonition, to heart, because it's no small matter to be entrusted with the guitar solo of such a good song.

Jazz: A songwriter’s plea. He asks for a love song. The song slowly builds from pseudo-acapella into a fully formed rock ballad. 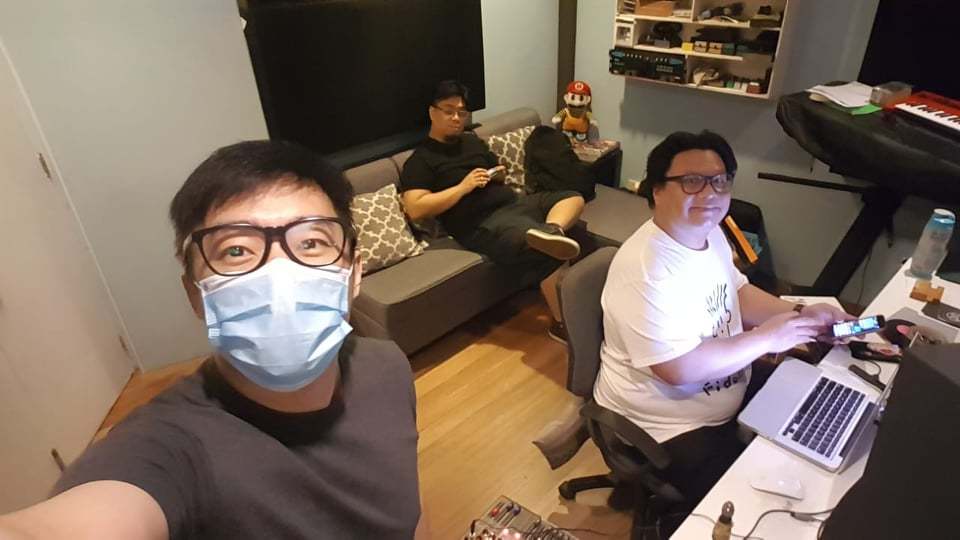 Jazz and Kel in the studio to track bass guitar and mix some songs.

Jugs: You know how they say that all the best songs come from the universe? Like The Beatles’ 'Yesterday' and 'Let It Be' both came from Paul McCartney’s dreams. Well this is my prayer, my plea, my wish... for the universe to give me a love song.

Kelvin: First time I heard this song, it reminded me of the earlier John Lennon Beatles songs, ala 'This Boy.' Simple, bare, honest, and cute.

'Mary Walter (In The Water)'

Chino: I love the experimental stuff that Jazz did with this song and 'Same Day.' My solo on 'Mary Walter (In The Water)' is one of the first guitar solos on this album that I crafted from scratch. Also around this point (May, I think), I was Zoom-ing with Jazz for direction on mood and feel. This defined my home workflow for recording my parts.

Kelvin: Another song that features a new sound from us. Jazz did a superb job with the production of this track. The song has so many layers and dimensions, one of those songs that everytime you listen to it, you discover a new element that you didn’t catch during your previous listens.

Jazz: The delirium you feel when you’re stuck at home and can’t do anything besides wallow in your thoughts. So you start seeing and hearing things.

Chino: I wish I had written this. 'InstruMental' comes quite close to some Joe Satriani songs, so I enjoyed playing on this. still can't shred, though.

Jugs: We always want to put an instrumental song in our albums, to showcase our left handed member’s guitar wizardry. We wrote a chorus for a “hook”. We were going for something close to The Police.

Jazz: The vague lyrics sort of give off a conspiracy theory vibe. These are some of the thoughts when you’re all alone in lockdown.

Chino: I enjoyed the odd time signature. I laid in more backwards guitar for the outro, in the spirit of experimentation. Sometimes we need to burn bridges, haha. 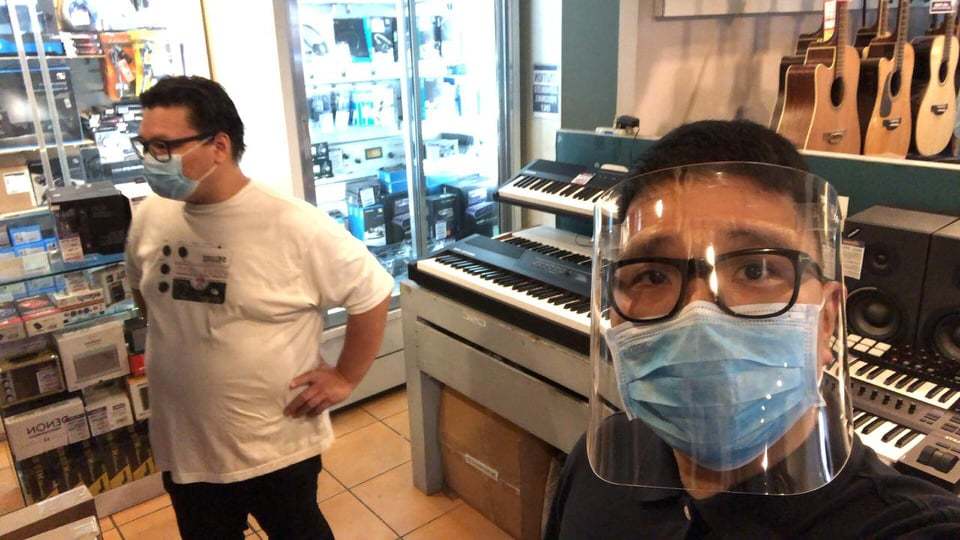 Jugs and Jazz meeting up for the first time since the start of quarantine to buy equipment for our studio.

Jugs: All albums of The Itchyworms have odd-time songs, and this is the one for this album. The song’s time signature changes from 4/4 to 3/4 and back again. My favourite part is when the melody is 3/4, but Jazz is playing 4/4 on the drums! Whoever said, “may the bridges I burn light my way!”, is a genius!

Jazz: The song tells of someone cutting off ties with people, kind of how the lockdown’s feeling of isolation already does that. If you burn your bridges now, does it count? Since no one is actually seeing anyone.

'The Life I Know'

Chino: This a gem of a song from Jazz. I put in the same care with guitar solo as 'Give Me A Love Song'—Jazz asked me to 'Mayer' it up haha.

Jazz: This talks about how one is suddenly detached from his former life of security and safety. How the change really causes one to grow and mature like he never imagined.

'Waiting For The End To Start'

Chino: Another fun song to record. I tried emulating the guitar sounds on songs you'd find in the soundtrack of a Quentin Tarantino or Robert Rodriguez film.

Kelvin: The album’s title track features a James Bond x Narcos feel that also sounds like it can be part of a Quentin Tarantino film. We asked our dear friend Richie Gonzaga, the best trumpet player from the Philippines, to play on this track, something that definitely elevated the song’s overall vibe and elegance 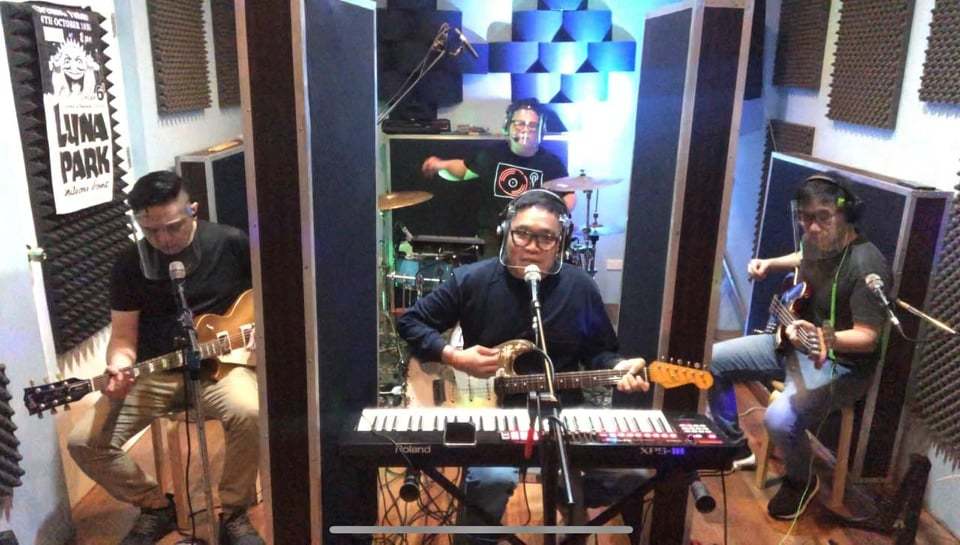 Jugs: Jazz and I were thinking of possible album titles for our new album. We wanted something pertaining to doomsday, because we’re tongue-in-cheek like that. I came up with 'Waiting For The End' and he added 'To Start'. It made perfect sense! We both agreed that it sounded like a James Bond movie title.

At the same time, my wife and I were binge-watching James Bond movies. After watching several films, she asked me, “what would it sound like if The Itchyworms were asked to write a James Bond song?” The rest, as they say, is history, Moneypenny.

Jazz: This is like the feeling of acceptance that the world is finally ending, and you’re not fighting it anymore. You’re just waiting for the inevitable to happen.

Waiting For the End to Start will be available on limited edition vinyl via Sony Music Philippines and Backspacer Records.