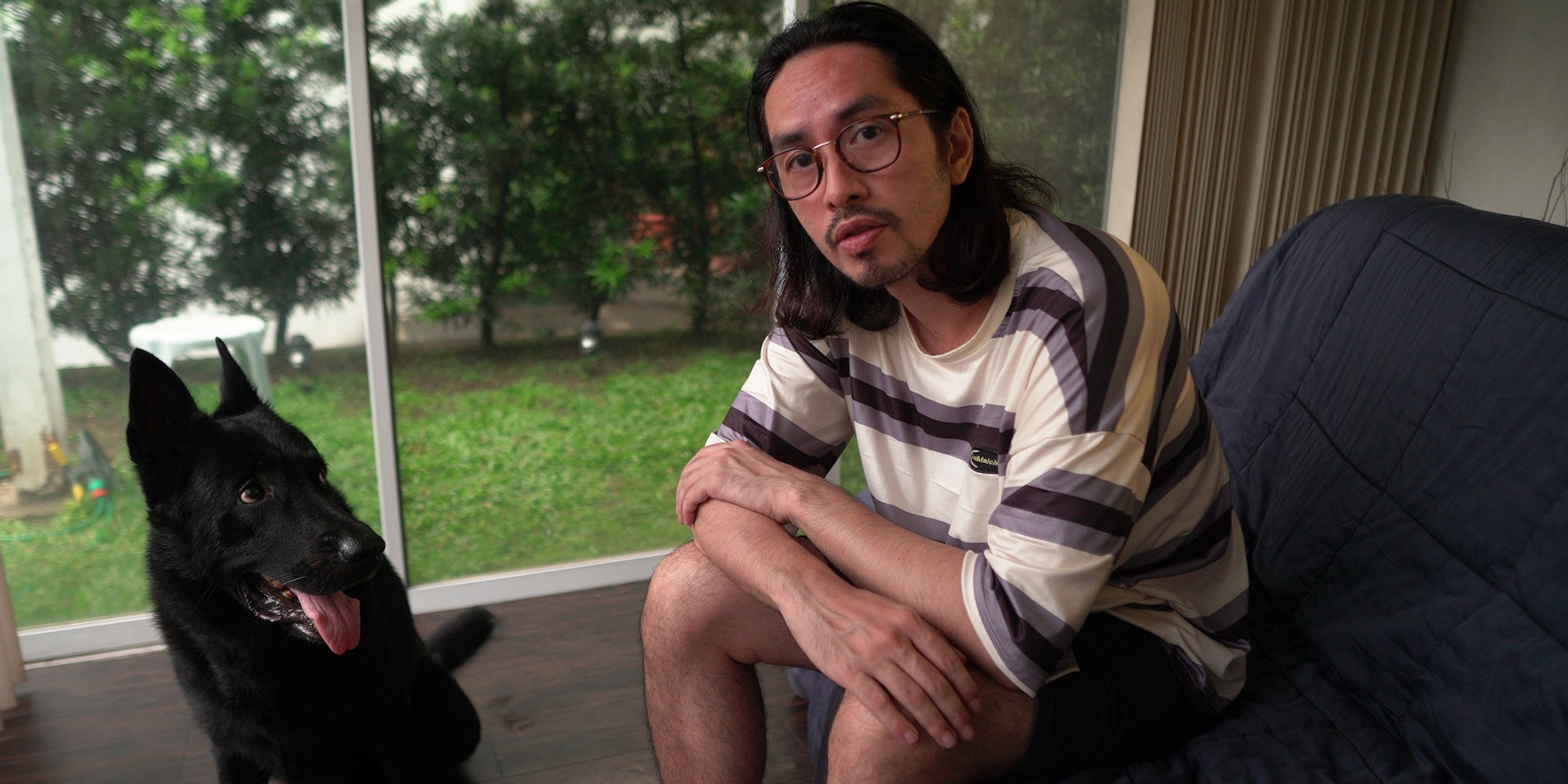 Rico Blanco forgot it was his birthday.

It's March 17 (Wednesday) and if it hadn't been for his family's harana over a video call at midnight—his second since lockdown happened last year—Blanco wouldn't have realized he'd turned another year older. It didn't even cross his mind when he scheduled this interview. But this guy has always been busy on his birthday.

Checking in with Ely Buendia, Sandwich, SB19, Reese Lansangan, Typecast, and more after one year in lockdown

"It happens naman to me every year," he says, smiling. "You know what, some of my best shows were on my birthday. A couple of gigs in Singapore. With Rivermaya and also as a solo artist. Several years of fiestas in Davao. But masaya eh, it just happens I'm working on my birthday." 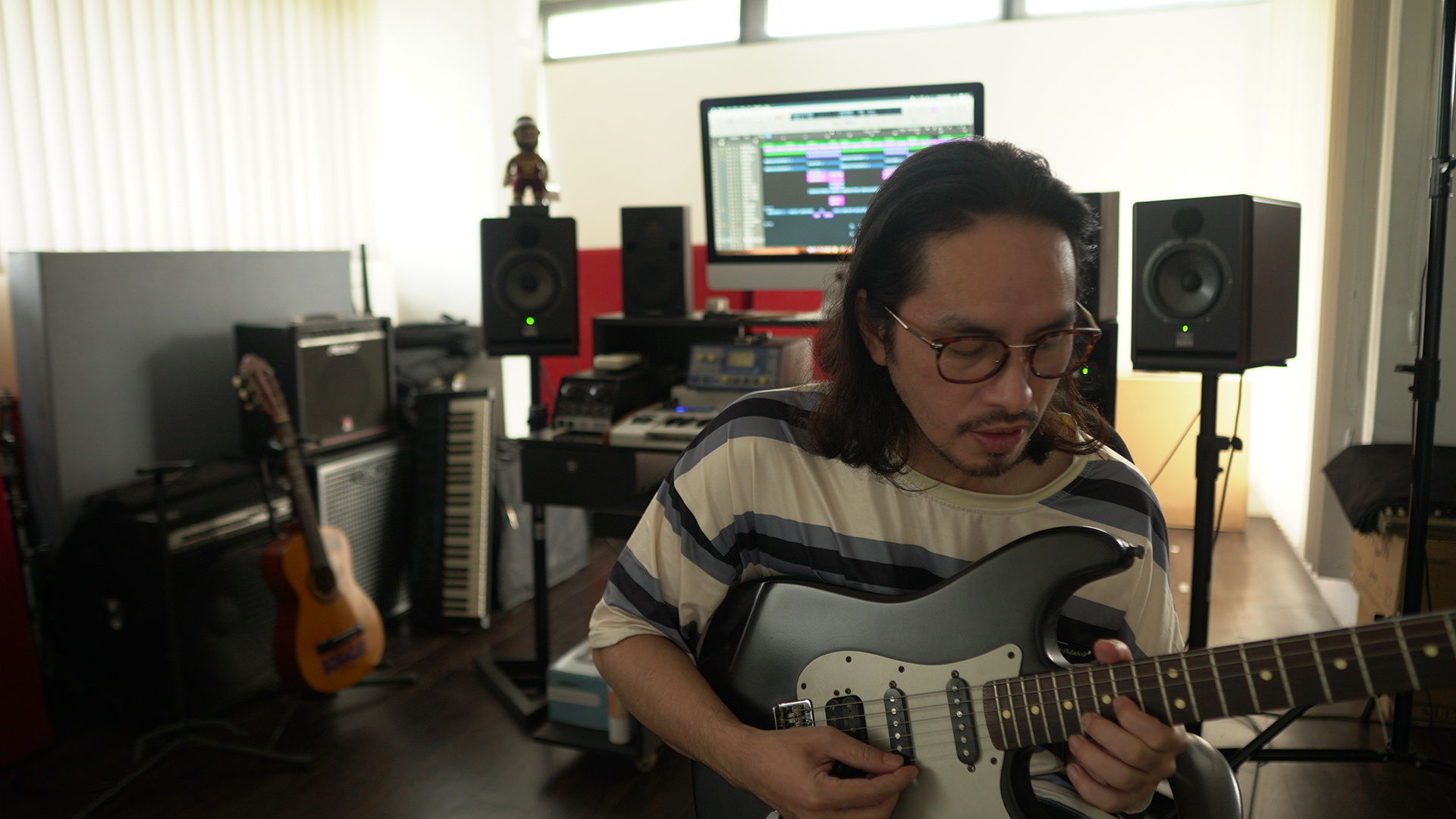 Compared to last year, Blanco appears happier and healthier—almost a complete 180 since we last spoke. He's doing a lot better since being forced to face the early days of the pandemic by himself, with one functioning hand and the other recovering from carpal tunnel surgery.

The guy's simply in a different headspace now (and so are his neighbors, who have home renovations going on). There's this whole new energy around him that matches the colorful striped shirt he's wearing today.

The dark bags under Blanco's eyes are gone and he's quick to joke that it's thanks to an LED light he randomly bought online while in quarantine. He even has a faster internet connection. He got household help back. His pets are doing well. His garden is flourishing. He has an office assistant. And most importantly, he has two working hands now. "I can't complain," Blanco stresses.

It took months for Blanco to get to his current state of mind. 2020 was a complete mess for everyone and finding a jolt of creative energy felt like a marathon with no clear finish line. But in May last year, he released his first solo offering in four years, 'This Too Shall Pass', and it was the most difficult song he'd ever come up with.

Things slowly started to pick up for Blanco. He kept himself busy by hosting livestream sessions through Kwentuhang Korics, where he spoke with artists and people behind the scenes, and Ang Dakilang Miron, where he poured all his feelings about sports into the digital realm.

These were some of Blanco's efforts to connect with people, at least virtually. He then elevated his setup in the studio, started getting comfortable in his safe space, and also helped out his family with their sauce business, Blanco's.

Blanco eventually reached a point where he'd realized that the pandemic obviously wasn't going anywhere. In August, he pulled up the blinds to face bluer skies and sunshine as he turned up the good vibes with 'Happy Feelin''.

"At some point, sabi ko, eto na 'to. Ano ba okay gawin? And parang connected na rin siya sa 'This Too Shall Pass' na parang, 'Hey, you're the guy with a studio in his house. You're that guy who can conceptualize, write, record, engineer, produce, finish, perform, and release it. I feel like I was meant to do it, parang it's the best thing for me to do during a pandemic," he says.

Blanco hasn't written any new music for himself since 'Happy Feelin'', though. Instead, he's placed his efforts on Balcony Entertainment and putting the spotlight on his artists: Ebe Dancel, Never The Strangers, Maris Racal, The Good Times, raven, Ashley Julianne, SUZARA, and Zild.

The Manila-based artist management and record label started around 10 years ago with Blanco wanting to share everything he could with other artists. When the pandemic hit, he had to hit pause on the label. Things were looking rather grim, but after an episode of Kwentuhang Korics with Zild a few months later, Blanco felt that spark again. It was time to get back to it.

"I wanted to encourage him," Blanco says. "He wanted to do more music, and he didn't know what to do kasi nga may pandemic, walang shows." After long weeks of back and forth phone calls and giving him time to think things through, Zild signed with Balcony Entertainment.

From then on, Blanco felt recharged to raise Balcony back up. He was inspired and felt that drive he needed to push forward. "I have this artist who's raring to go," he says. "He had some doubts also for a while, but parang yung age kasi niya eh, where he is in his career, for me, he should be doing music and a pandemic shouldn't stop him."

It wasn't just Zild who turned to Blanco for help. Ebe Dancel also looked up to Blanco for advice until their long talks led Dancel to join the Balcony family. Blanco also had similar conversations with Top Suzara and Bolichie Suzara, singer-songwriter and actress Maris Racal, and rising YouTube musician raven, who were all struggling to get by. It became clear to Blanco that this was where he really had to be: offering his hand to lift local artists to pursue music.

Blanco describes his "comeback" with Balcony as purely coincidental after laying low for four years to focus on other things. "I was in that headspace where I decided I wanted to do something in the music sphere. This is me coming back full-on with all these other artists." 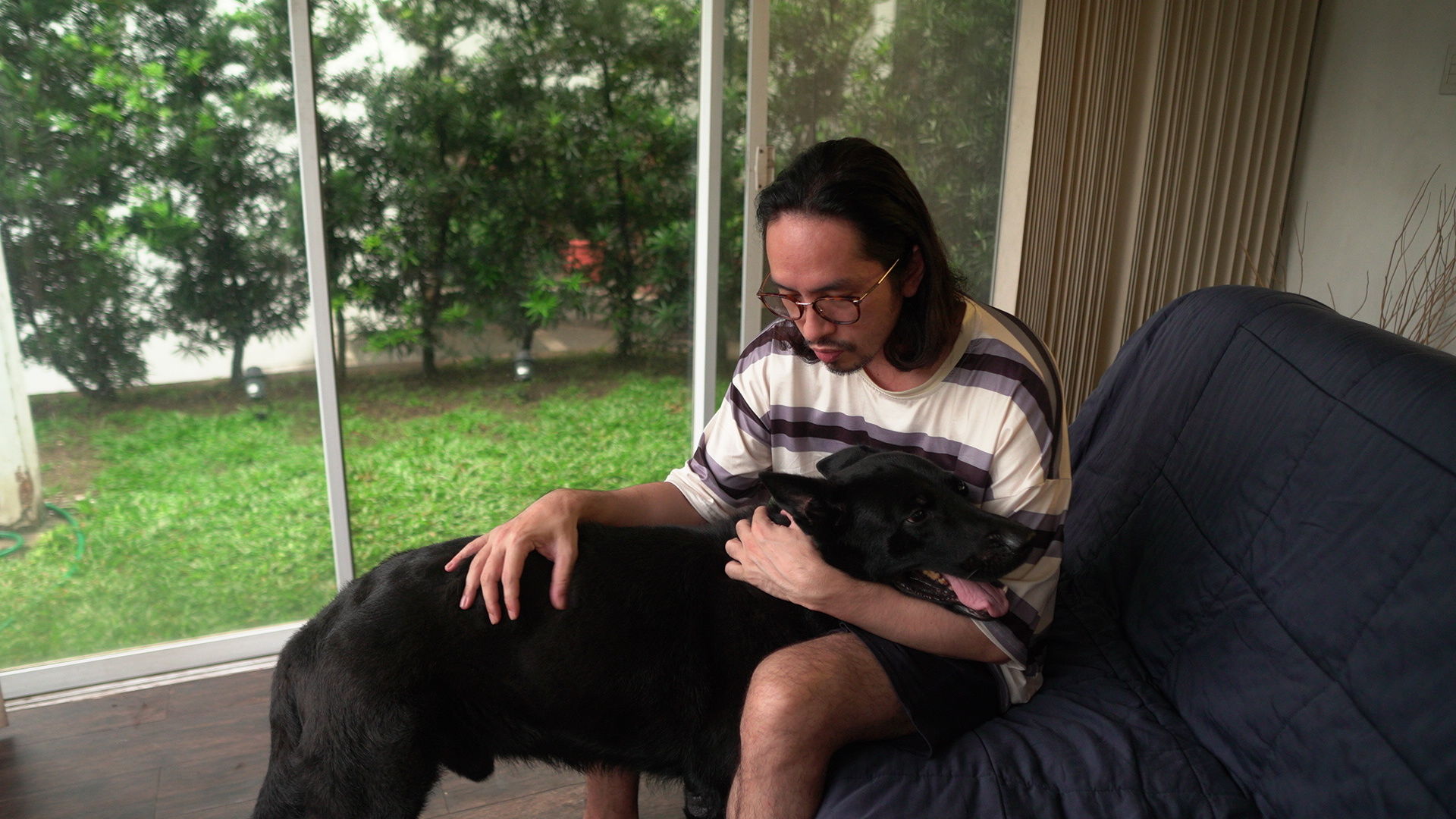 Blanco even managed to hold a drive-in concert with KZ Tandingan in February this year, where instead of his usual 6-piece band, he downsized to playing with a trio. "Throughout my career, [I had] a lot of firsts," Blanco says. "Some have been successful, some failed. But one thing I can say is that I really am game if it's a first-like-this, first-like that. Whatever it is—game let's try it."

He recalls how he never wanted a sound check to end and how different it was to hear car horns instead of applause after playing a song. "I think we were all just happy to have that communal experience. Even those people at home, watching virtually lang, parang they feel the energy. And I felt that for sure. It felt so nice."

A week before our call, Blanco was sure about his plans. "I knew I was gonna shoot, shoot, shoot the videos [for Balcony artists]. Release, release, release," he says, but then the news immediately put a roadblock to his momentum.

While the rest of the world rolls out major COVID-19 vaccination programs and jumpstarts the live music scene again, the Philippines faces thousands of new coronavirus cases daily (with 115,495 currently ill patients at press time).

Citizens are still required to wear face masks and face shields. Doctors and nurses are exhausted. Hospitals continue to hit full capacity. High-flow oxygen machines and ventilators are rarely available. Stocks of COVID-19 treatments are running out. Earlier curfews are taking place again. Checkpoints have been mounted around certain areas in "NCR Plus". It's pretty much the same thing as last year, if not worse.

"There's so much going on in the world and it wasn't just the pandemic. There was a lot of turmoil socially," Blanco says, adding how 2020 was most certainly the year everyone spent the most time in front of their phones and computer screens. The extended screen time affected his presbyopia so bad that it has greatly deteriorated over the past year.

But not much has changed since the pandemic started, except people are "not as scared," according to Blanco. He explains, "Scared is not the same as concerned, we're all still very much concerned. I'm very much concerned, and patience is the thing now, maybe last year it was fear and anxiety. Right now it's really patience that we need to work on." 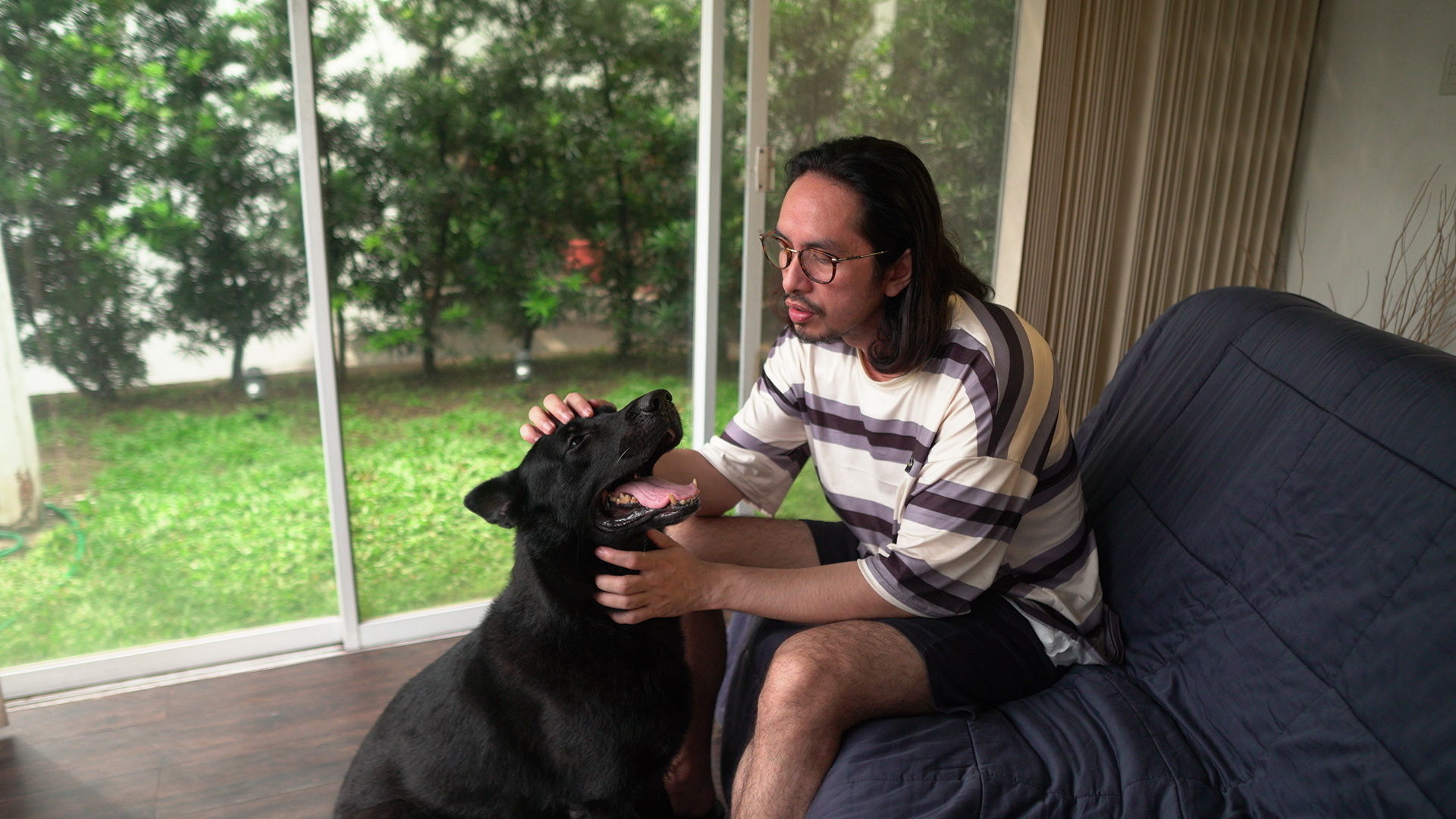 Despite all the challenges the ongoing pandemic has placed before Blanco, he continues to fight and remains 1,000% committed to giving his artists everything he's got. "I owe it to my artists to be full-on Balcony," he says. "I don't promise them success. I can't promise that. But I promise them my full support and the best shot at success."

Asked what it feels to give back so much to all these artists who look up to him, he quickly points out, "I know I'm giving them something, but they give me something, too. So I can't say I'm doing this just to give back." Working with his artists has been extremely inspiring that he now feels energized. "By them allowing me to go with them on their journey, I get that thrill also," he says.

Putting all his energy into Balcony has taken up space from him being able to do his own music. "I call it GMY—ginusto mo yan," he laughs. At some point last year, he found himself excited to simply sit down and give comments on creative inputs from his artists. "I'm trying to make sure I don't get to the point that I don't enjoy it anymore. Kasi ginusto ko yun, eh. So I have to remember where I was, when I wished for it, because now it's a reality. It's not a dream anymore."

Blanco feels he still has time to take on a few more artists for creative mentorship and music production, but he's also hoping to grow the admin and label side of Balcony Entertainment. Now that he's able to get 12 hours of work done and 8 hours of sleep every day, it looks like he only needs to make a few more tweaks to optimize Balcony's capacity.

We might still be in the same situation a year later, but things have become clearer for everyone: it's time to move and ask yourself, "Ano ba okay gawin?"