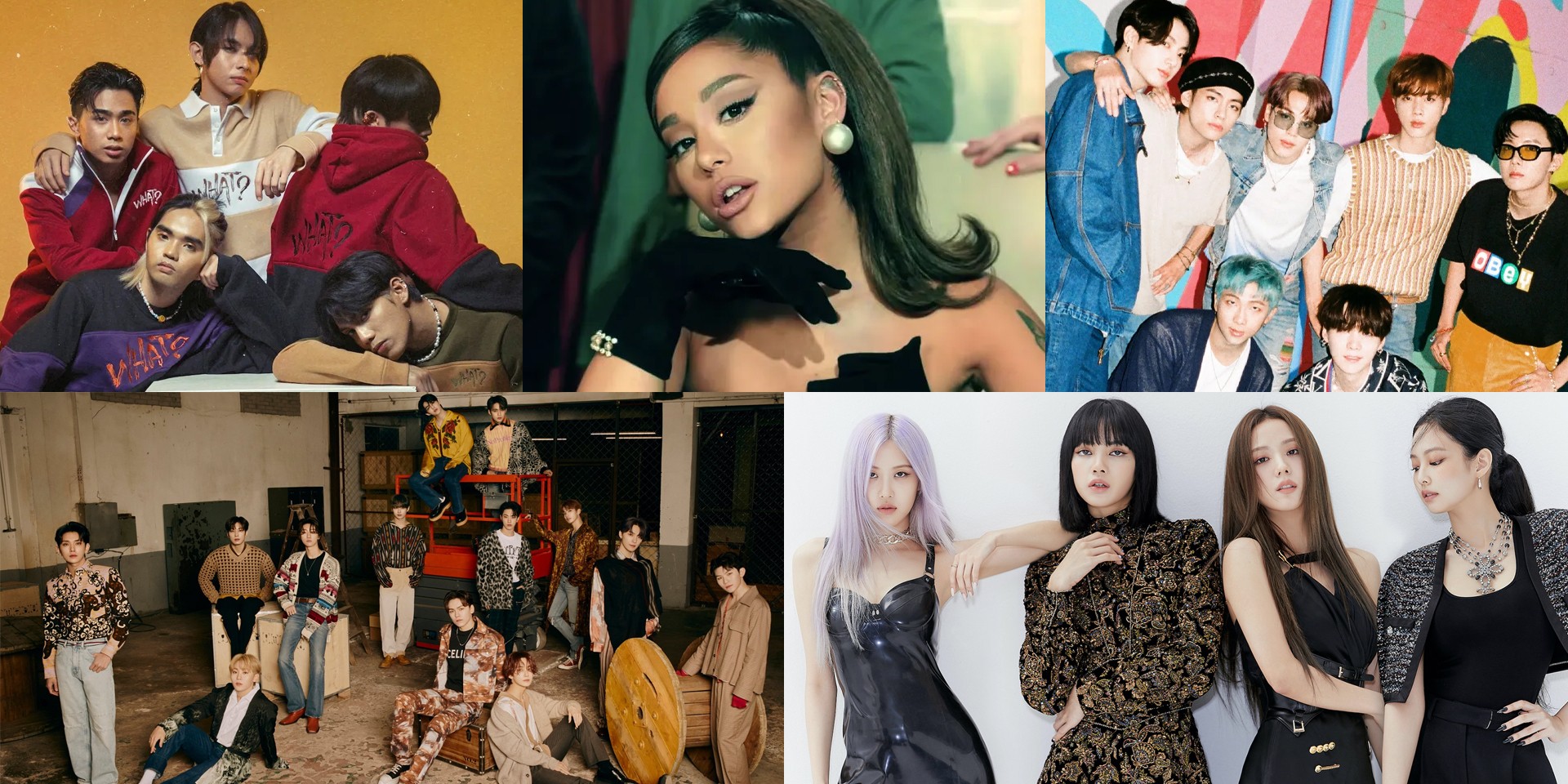 It's a big year for Asian artists at the 31st Billboard Music Awards.

The finalists of the 2021 Billboard Music Awards were announced on Thursday night (04/29), giving nods to the likes of The Weeknd, Doja Cat, Miley Cyrus, Dua Lipa, Lady Gaga, Justin Bieber, and Harry Styles.

But one thing music fans will notice is that Asians acts are climbing the charts toward world domination. Such is the case for the BBMAs Top Social Artist Finalists: BLACKPINK, BTS, SEVENTEEN, and SB19, the first three hailing from South Korea while the 'WHAT?' quintet make history as the first Filipino group to appear in the category. The only outlier on the list is American chart-topper Ariana Grande, who's been making waves with her latest studio record positions.

Besides supporting their favorite artists, these fandoms have also initiated various charity efforts, information campaigns, and donation drives to help those in need. Recently in the Philippines, community pantries raising the banner for their idols have been popping up across the country to offer food and essentials for people affected by the ongoing pandemic.

According to Billboard, nominees of the Top Social Artists are based on "key fan interactions with music, tracked by Billboard and its data partners, including MRC Data."

Get to know a little more about the fandoms backing BTS, BLACKPINK, SB19, Ariana Grande, and SEVENTEEN below.

Combining the words black and pink, BLINKs raise the 'Lovesick Girls' quartet to new heights with their undying love and support. The fierce power and dedication BLACKPINK carry with them mirror the same energy as their BLINKs through every milestone they hit in their career.

With the girls coming from different corners of the world, BLINKs embrace the representation the group holds, standing proud as Asians.

BTS' legion of fans, known as ARMY, helped the 'Life Goes On' act to become the first all-South Korean act to reach the top of the Billboard Hot 100 with their GRAMMY-nominated single 'Dynamite'.

With their commitment to bring BTS to the forefront of the international music scene, ARMYs have helped the group win the name of Top Social Artist at the Billboard Music Awards for four consecutive years.

Ariana Grande, the only American solo artist in the running, has been granted her third Top Social Artist Chart nomination thanks to the noise her Arianators make online.

The fandom, which Grande originally called the Ariana Army and Tiny Elephants, named themselves Arianators.

It's clear that P-Pop group SB19 are breaking into the international music scene with the help of their dedicated fandom A'TIN. The fandom's name was inspired by the Filipino word "atin", which translates to "ours" in English, and was made official in 2019. They're a group of natural leaders and creatives that work hand in hand to help SB19 reach their dreams as they conquer the world with their music.

One of A'TIN Philippines' admins tells Bandwagon in an interview that SB19 "work hard to give [fans] the best of everything."

SEVENTEEN are met with a new monumental milestone as a Billboard Music Awards Top Social Chart nominee, thanks to their CARATs.

The name of the fandom came to be after fans took a vote on SEVENTEEN's official website back in 2016. The name CARAT stuck and was revealed during a concert with SEVENTEEN leader S. Coups saying "You guys made us shine so bright. So you guys are now going to be our CARAT."

"We'd like to thank our CARATs for giving us this moment," the group shares in an interview with Billboard.

The 2021 Billboard Music Awards will air live from the Microsoft Theatre in Los Angeles on 23 May at 8 AM SGT/PHT (8 PM EST, 5 PM PST) on NBC. It will be hosted by Nick Jonas.