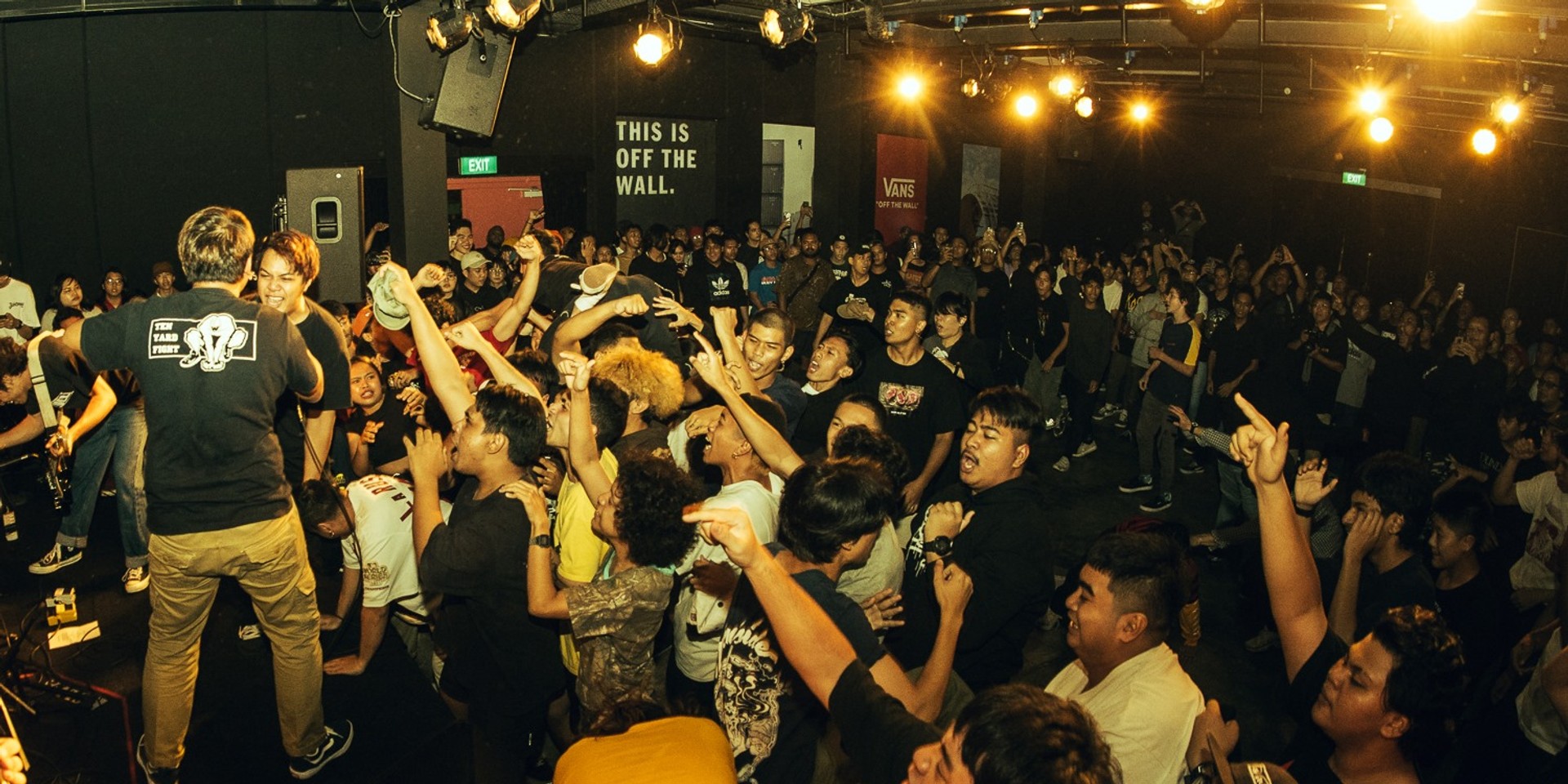 Since 1966, Vans has made a name for itself being one of the most popular brands in the world. Initially gaining their footing amongst skaters, Vans has become a significant presence in the music scene.

While footwear and music seem like worlds apart, the brand’s adoption into the scene was rather organic. It all started with the skaters and surfers who wore Vans merchandise to a myriad of punk-rock and metal shows and concerts in the early 70s. Since then, the brand continued its move into the music world by sponsoring the world’s largest travelling rock concert series, Warped Tour, launching a digital music series called ‘Sidestripe Sessions’ and collaborating with a number of musicians, like Iron Maiden, Metallica, and Tyler The Creator, on limited-edition merchandise.

All of this has led up to one of Vans’ most important music projects yet - Vans Musicians Wanted. Originally exclusive to Asia-Pacific region,  Vans Musicians Wanted is a music competition that aims to spotlight independent artists across the region, from different genres and backgrounds.

Through the years, Vans Musicians Wanted has undergone a series of changes but one thing stays the same - its goal to create a creative outlet of expression and a rising platform for aspiring musicians across genres, languages, and borders, even after the competition declares a winner. Vans continues to help participants through their budding music programmes and shows.

This year, however, marks an exciting era for Vans Musicians Wanted, having opened global submissions for the first time since its inception - making it the biggest edition in its history.

With an online concert lined up on 9 December, 2020 boasts a highly esteemed panel of judges which includes Anderson .Paak, J.I.D, Nilufer Yanya, Bohan Phoenix, and Tierney Stout. Finalists are competing for a chance to share the stage with Anderson .Paak at the House of Vans, a Universal Music Group-produced and promoted music video, unlimited digital distribution by Spinnup, Fender gear, Vans products, and more.

#VansMusiciansWanted is NOW OPEN! Submit your original music by Sep 30th, you’ll get a chance to share the stage with @anderson._paak with all the dream prizes supported by @universalmusicgroup,@spinnup, @Fender, global music platform playlisting and more. Go to VANS.COM/MUSICIANSWANTED and let the world hear your music.

Yet despite all that the competition has become, Vans Musicians Wanted started from humble beginnings.

How it all began

Vans launched the program in 2015, exclusive to China, Hong Kong, and South Korea. Armed with a simple mission to unearth local talent and provide a stage for aspiring musicians, the competition was included as a session in the local stops of the House of Vans Asia tour. Calling on anyone who had a passion in music, less than a hundred acts donned their respective local stages. This, as simple as it might be, was the beginning of the rise of Vans Musicians Wanted.

From there, the competition only got bigger. After notable success within East Asia, Vans Musicians Wanted spread to the greater Asia-Pacific region. In 2016, the initiative made landfall in Singapore, Malaysia, and the Philippines.

With a budding music scene and tens of excited artists itching to perform on a stage, Singapore’s edition of Vans Musicians Wanted grew immediate traction in its first run. 45 independent artists responded to the call, including a number of well-known local names like Disco Hue, Long Live the Empire, Losing End, Iman's League and Exhibitors.

After a competitive battleground of talented, local musicians, punk-rock band Generation 69 were eventually declared Singapore’s first-ever Musicians Wanted winner after a riveting performance at the now-defunct Hood Bar and Cafe. The band has achieved many things since then - from releasing a series of records to playing shows across the region. Their guitarist, Amin, even opened up what would be the stage for Vans Musicians Wanted 2018 - Decline, a live music venue.

In 2017, in a feat to continue showcasing talented musicians on a global stage, Vans Musicians Wanted gave winners the opportunity to travel to Guangzhou and play at the final stop of the House of Vans Asia tour. Singapore’s metal outfit Mi Ultimo was one of a few to perform on a regional stage at Guangzhou, after winning the crown back home at Timbre @ The Substation.

“We never knew how the crowd would react to our music but by the time we hit our first riff, the crowd suddenly went wild bouncing up & down to the rhythm. It felt surreal seeing that reaction from them as if they knew our songs,” said Mi Ultimo in a 2018 interview with Bandwagon.

Vans Musicians Wanted has become a staple in the local music scene. Hundreds of aspiring artists look forward to the competition’s regional rounds every single year. And, as the competition grew, so did its prizes. Competitors were no longer just competing for cash prizes or a spot at the House of Vans Asia tour, but also for an opportunity to perform alongside internationally renowned acts, like ScHoolboy Q, and take their talents to a global stage.

In 2018, Singapore’s competition rounds saw five entirely distinct genres, for the first time ever. Fans who gathered in Decline were treated with the presence of metal, heavy rock, pop, hip-hop, and funk all in one night. First time performer, pop singer-songwriter Shye eventually took home the big win, crowning her the youngest Vans Musicians Wanted winner at only 16-years-old.

“Vans Musicians Wanted is so important to me because it was the beginning of this amazing journey that I’ve been so lucky to grow from. It gave me the opportunity to go out and actually do what I love,” Shye told Bandwagon, a year after her win.

The following year, Vans Musicians Wanted 2019 launched a global showcase, giving competitors a chance to battle it out at the House of Vans Chicago to be the undisputed winner, as well as a music video produced and aired by MTV Asia.

Over a hundred musical acts answered the call within the country, all ranging from a plethora of playing styles and genres - the largest the competition has seen in Singapore thus far. Bad Dod, a garage rock band, took home the crown via unanimous decision despite it being their first-ever live performance.

The band moved on to House of Vans Chicago for a grand showcase, alongside fellow winners from Australia, Japan, China, the Philippines, South Korea, Taiwan, and Hong Kong. In a strong display of talent and skill, two winners had to be declared. In a first for the competition, Australia’s Shaerae, and Japan’s 999999999 were crowned dual winners.

Despite the COVID-19 pandemic, nothing was going to stop the program from showcasing undiscovered local talent from all over the region and the world. Vans Musicians Wanted 2020 pushed onwards via digital platforms and is shaping up to be one of the most exciting editions yet. Armed with the mission to create an authentic creative platform to the worldwide audience, the competition opened its doors to the world. Still in progress, over 22,000 submissions were received from all over the globe, with more than 400 from Singapore alone.

But the excitement doesn’t stop there - beyond the highly anticipated digital concert, Singapore has first saw 15 shortlisted artists, instead of its usual five, all featuring a diverse mix of sounds.

With their eyes on the prize, homegrown act Ultra Mega Cat made it all the way to the APAC Top 5 with a coveted spot performing at the online concert on 9 December, as well as join the ever-growing Vans ecosystem. Alongside Ultra Mega Cat, Korea's Num Num and H4RDY, Japan's Niko Niko Tan Tan, and China's PurpleSoul also made it to the APAC Top 5 and are slated to perform at the upcoming online concert.

In its six editions so far, the competition has evolved and grown immensely. From the number of applicants to the grand prizes, things have only gotten bigger, including the community surrounding Vans Musicians Wanted.

The same passion and love for music we've seen through the years have extended outside the constraints of the competition, leading to the growth of various aspects of the local music ecosystem with events such as House of Vans, the Spirit of DIY show series, and more, helping to provide platforms to grow and house more independent artists and music in Singapore.

As the brand continues to build on its mission to spotlight creative talent and off-the-wall musicians, so does the hope for independent musicians to come forward and showcase their musicality through these platforms, all while shining the light back to the music scene in Asia.

The highly anticipated Vans Musicians Wanted Online Concert is only a few sleeps away. It is slated on 9 December, where fans can tune in to watch performances from the APAC Top 5.

For more information about the 15 Singapore finalists and their music, check out https://vansmusicianswanted.bandwagon.asia/.