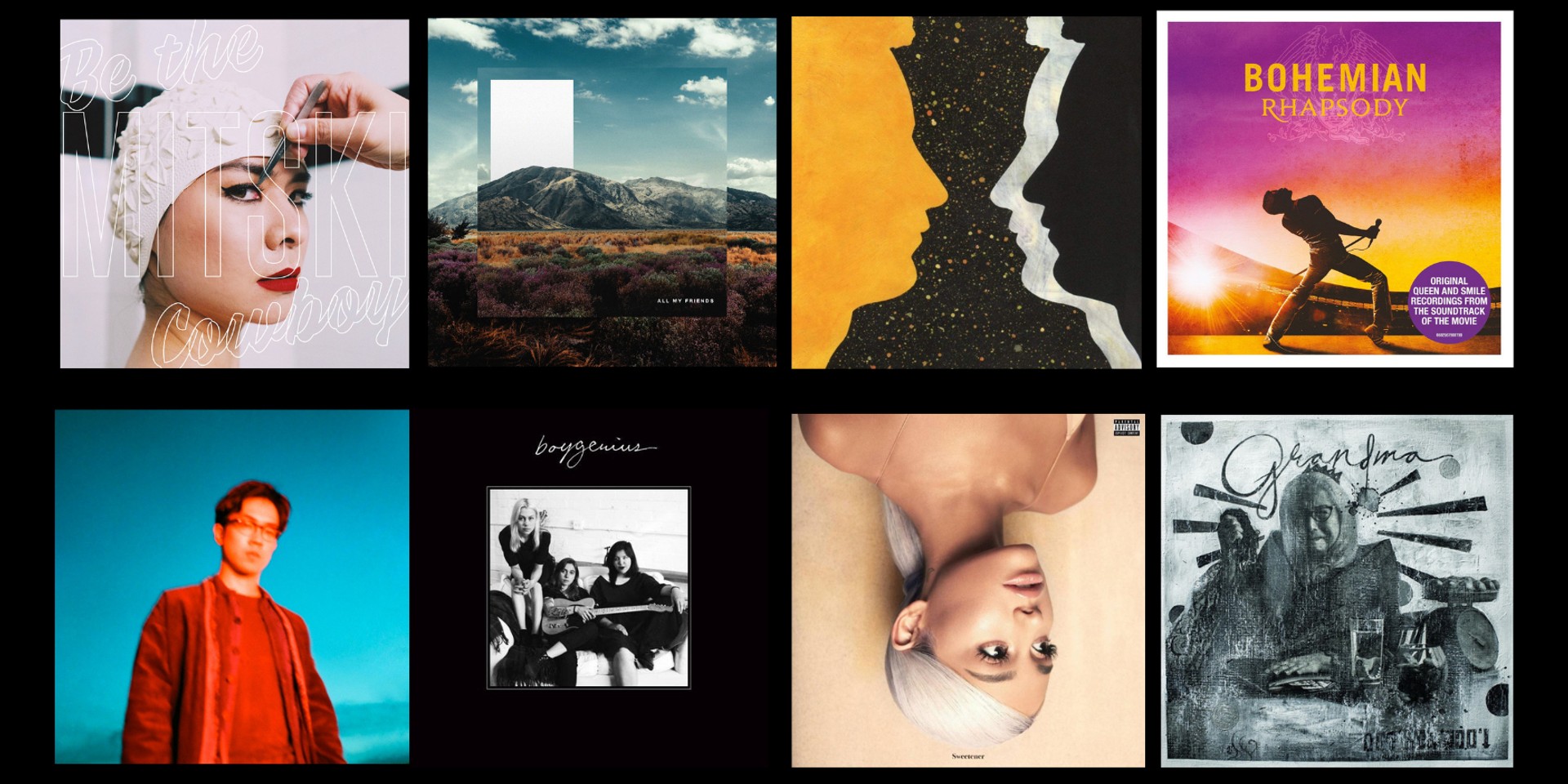 A lot of great music made its way through digital airwaves, cassettes, and vinyl in 2018. The year saw the unveiling of long-awaited albums, solid breakthroughs, and soundtracks that ruled Spotify Wrapped lists.

Here are Bandwagon Philippines's personal picks from this year.

So this album came out in 1993 (I was 7 and my older cousins would play the cassette tape) and I remember ‘Toyang’ as one of the first songs I ever heard from the Eraserheads. As a kid, I was also greatly amused by ‘Tindahan Ni Aling Nena.’ Hearing the remastered 25th-anniversary edition just brings back a lot of memories. I can’t wait for the vinyl record to come out next year!

A proper comeback from Mariah Carey! The new album is true to her signature style, but also manages to stay current. Pleasantly surprised to find out she collaborated with Blood Orange for ‘Giving Me Life’. Caution is a great way to celebrate Mimi's 15 years in the music industry.

I’ve been a fan of AHJ since his first solo album and throughout the years, he’s released a couple more, but Francis Trouble is the one I’ve connected with the most. He just sounds like he’s completely let himself go in this album, like nothing held him back anymore. I’ve been lucky enough to catch him live earlier this year at We The Fest in Jakarta - the songs sound even better performed live.

Be the Cowboy - Mitski

Mitski’s music has always been characterized by raw honesty and a vulnerability that is as much a testament to strength as it is a revelation of weakness and shame. Be the Cowboy is exactly this way. But whereas previous album, Puberty 2, echoed the addictive rush of struggle, and the album before that, Bury Me at Makeout Creek, was about the pleasure found in despondence, Mitski’s latest album takes full hold of all the feelings she has inside -- good and bad.

On a personal note, it’s this one that has been easiest for me to listen to in its entirety and on repeat, probably because I’m at the same stage in my life as the voice in the album, one where I’m more at peace with my demons and aware (though not always in control) of myself. But it’s also because the music relays these themes so well, with deceptively jovial twists and gut-wrenching, unexpected punches in its structure to keep you eagerly angling for more.

Standout tracks: 'Geyser', 'Remember My Name', 'Me and My Husband'

I discovered Japanese punk band Survive Said The Prophet through an anime I follow, and instantly fell in love with their sound when I checked out their existing albums, which reminded me of the tight, vigorous sound and hopeful lyrics of the J-rock I grew up loving.

In their third LP, SSTP takes a more pronounced step towards offering a variety of sound and in the process presents a mastery in creating balance.

While fans of hardcore punk will probably appreciate their debut album more, the maturity which s p a c e [s] showcases cannot be denied. Lead vocalist Yosh Morita takes on the frustrations and desire in the lyrics with such controlled expression, and the tracks’ smooth progressions between aggressive and mellow, upbeat and melancholy make the short but solid album one you'll want to perpetually listen to on repeat.

P.S. It’s about 90% in English, so even non-Japanese-speaking fans can appreciate the lyrics with ease.

For years tide/edit has worked with a steady formula in creating their music -- that is having no set-in-stone standard formula they strictly follow. It's this characteristic chillness that keeps All My Friends as potent as its predecessors. Only this time it's made more meaningful by being declared to be an offering to the people the band has found a connection with throughout their journey so far. The title fits perfectly, really, as tide/edit’s music and presence have always been a reliable source of refreshing energy for their friends and fans.

Standout tracks: 'To the Zoo', 'Afterglow'

Listening to Charlie Lim’s newest can be compared to getting to know a new side of him and still, still, still liking him a lot (and hating myself for being sick during his short visit in the Philippines. I vow to catch him at Wanderland next year!)

CHECK-HOOK is obviously very different from the singer-songwriter’s 2016 album, but it has captured all the reasons why I love him in the first place: his melodious voice, the meaningful lyrics, and his uncanny ability to use music in pure self-expression (also, that sample in ‘Welcome Home’ gets me every time).

It was around summertime when Tom Misch got my days and nights filled with 'Movie.' And then 'Tick-Tock.' And then 'Disco Yes.' Exploring Geography was thoroughly enjoyable because his songs literally embody easy listening: some jazzy, dance-y, and happy, some soulful and melancholic, all perfect to chill to whether you’re pulling an all-nighter on the road or battling the horrid Manila traffic.

Then I heard him live. And it was intense. But that story’s for another day.

This year, GOT7 (a.k.a. the only Korean idol group who had me interested in their choreography long enough for me to eventually pay close attention to their music) released their newest album: an interesting mix of synth-pop songs, trap bops, and hip-hop hits and pop ballads.

Their newest album is not just the perfect September picker-upper. It is also a showcase of  JB’s songwriting talent, Jackson’s skills in musical arrangement, Mark’s and BamBam’s lyrical prowess (in Korean, Chinese, English, Japanese and Spanish!), and Yugyeom’s, Youngjae’s and Jinyoung’s powerful vocals.

Every album Tesseract has put out leaves a huge impact on my life and is on constant rotation whether I'm having a good or bad day. Sonder sees the band take on a new sound, all while keeping true to their progressive metal roots.

The hype over Sweetener has been so real. Catch me at home writing and drawing or on the road singing (rather passionately) to Grande's latest full-length offering. Also, 'R.E.M' and 'breathin'' are incredible.

I went to see Bohemian Rhapsody at the movies four times and have been listening to its soundtrack every day since.

Samuel Seo always brings together a variety of musical genres and, in UNITY, he focuses on jazz from a different perspective. The title track 'Happy Avocado' had elements of synthpop and is accompanied by a music video where Samuel is cooking avocados - which is symbolic of happiness in the simplest things.

'Jazz In My' and '창문 (Window)' reflect a softer, more relaxed side of life where we wake up to a warm, crisp sunrise and sleep to the sound of a piano concerto in the halls of our mind.

Whenever I wasn’t in the mood to listen to K-Pop, I had this album on loop for many times. If you’re going around Seoul, please order the Avo Holic (an avocado sandwich) from Egg Drop and listen to 'Happy Avocado'. I did, and it was funny and memorable.

All of a Sudden - Manast LL'

Kitsune has collected many talented artists from the around the world and, I'm so glad Manast LL' had to be one of those people. This young, Parisian artist’s work is raw and easy to listen to, and it gives a picturesque mental image of rap and hip-hop and sedates every listener into a trance of rhythmic, lyrical wisdom. Where You Goin features an intimate exchange that transcends into a universal thought (or question, rather), accompanied by Rome Fortune’s velvet vocals.

My personal favorite is 23. It's calm and collected yet as upbeat as I would expect my frequent dose of caffeine to be. Hopefully, this guy finds himself talking to A$AP Rocky or even Anderson .Paak.

As a fan of quintessential rock, I found myself looping 'OZONE' more than I have for any other tracks in this album. Grandma is an old, hardbound book found under the back of a rusty truck that was probably driven by Unique’s creative mind. It sounds like a riot and a prayer as the sweet slumber of 'Midnight Sky' and the elements of pop lingering between 'Jules' and 'I’ll Break Your Little Heart'. This album is pure, scattered yet tangled in a web of obscurity and wonder.

Even with their distinct musical and lyrical styles – with room for overlaps – indie rock darlings Julien Baker, Phoebe Bridgers, and Lucy Dacus have united into a formidable super trio in this EP.

Across its six tracks, boygenius never sounds incohesive and discordant. Instead of being just a collection, the EP is an exactly what a great collaboration sounds and looks like.

Be the Cowboy - Mitski

Mitski Miyawaki’s Be the Cowboy, her “[experiment] in narrative and fiction,”  is sort of a departure from her previous work with intimate chamber pop. In a way, too, it’s an exhortation for us to stop projecting on her, without shedding any of her music’s characteristic vulnerabilities on full, crystal-clear display.

In Be the Cowboy, the singer-songwriter takes on and upends a quintessentially American mythos and persona: the swashbuckling cowboy. “I think [this album’s] protagonist is someone like me, who feels like they want to channel or embody that energy of a cowboy," she told Trevor Noah.

The record, as promised, was filled with grand stories and emotion, just like the cowboys of classic Westerns sans the melodrama.

Many will stay for the album’s breakout hit, the disco-tinged bop “Nobody,” but Be the Cowboy is a well-rounded piece of work showcasing Mitski’s peerless lyrical chops.

I dare say it could even be her best to date.

It‘s at once the familiar indie rock of yesteryears, but it is also complex, forward-thinking, and – in some manner – progressive, going beyond the straight white men that fill the scene.

There’s a lo-fi, Pavement or Wilco-esque flavor to her first full-length effort, but it is also polished and sharply produced, as expected from the classically trained guitarist.

Lush is lyrically honest, conversational and transparent, which makes it all the more special.

I’m a big fan of Hale and Alon is very somber yet peaceful. The songs in Alon make me reminisce about different points in my past, whether they’re good or bad.

Ariana Grande will never fail to impress, and her style just keeps improving. I prefer Ariana’s singing here more compared to The Best in 2017. It’s also cute how a lot of the songs aren’t properly capitalized. My favorite is 'breathin'', and it’s just a good vibes song.

It’s a solid album overall and it’s a testament that UNIQUE doesn’t need his former band to be somebody. 'Apoy Ng Kandila' is the best song in the album for me because of its depth.

Check out the Best Albums of 2018 according to Bandwagon Singapore.