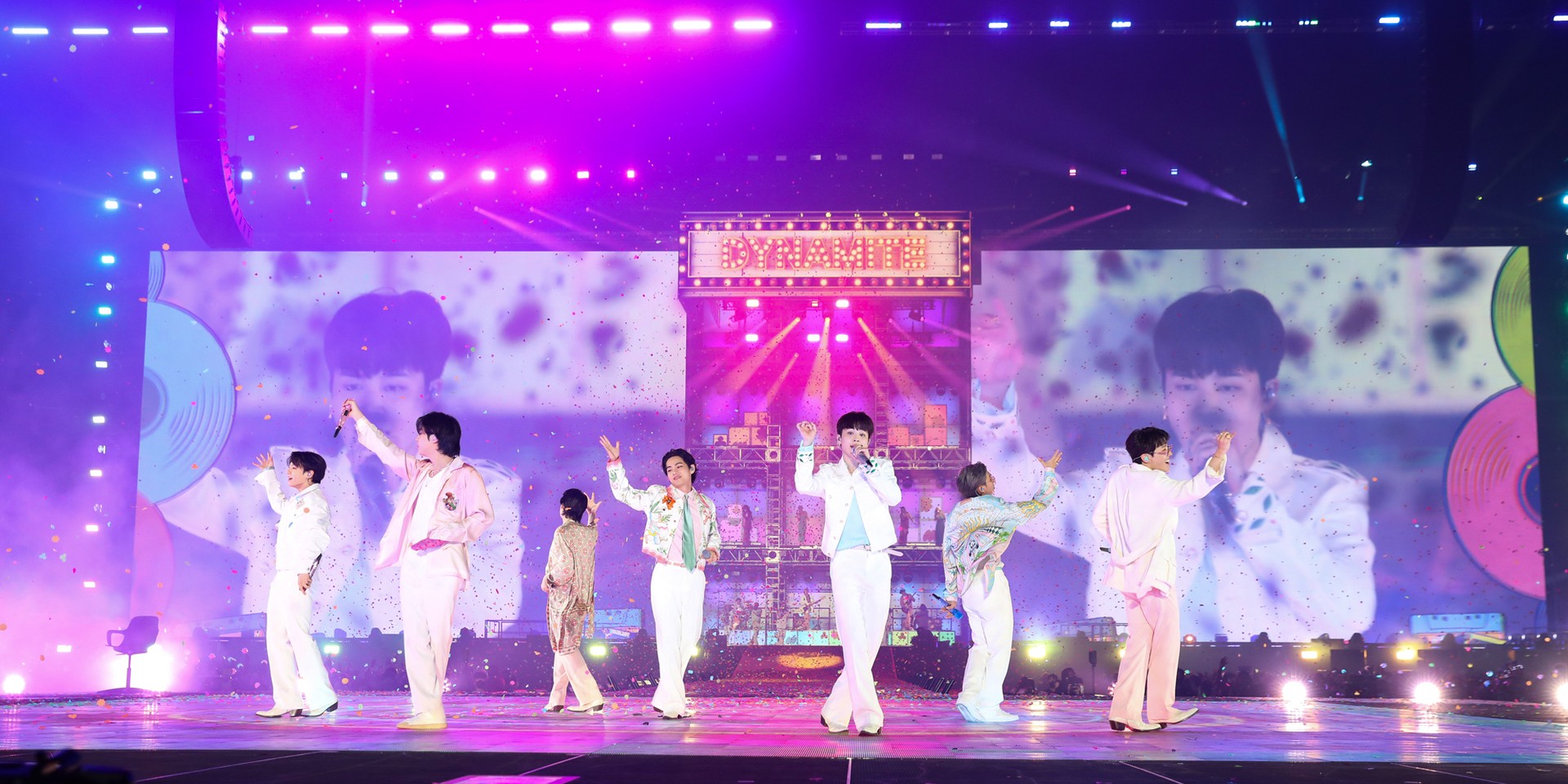 “This is not gonna be the last time!”

These are the words that Jungkook exclaimed as BTS wrapped up four nights of their sold-out residency at the Allegiant Stadium last Sunday (17/04). At ten-thirty in the morning, I was watching my seventh BTS concert in a row, thanks to the internet. Accompanied by one of my favourite RJs (the small angry-looking one), I tuned in to the PERMISSION TO DANCE ON STAGE - LAS VEGAS livestream on Kiswe, and joined over 420,000 fans from around the world. 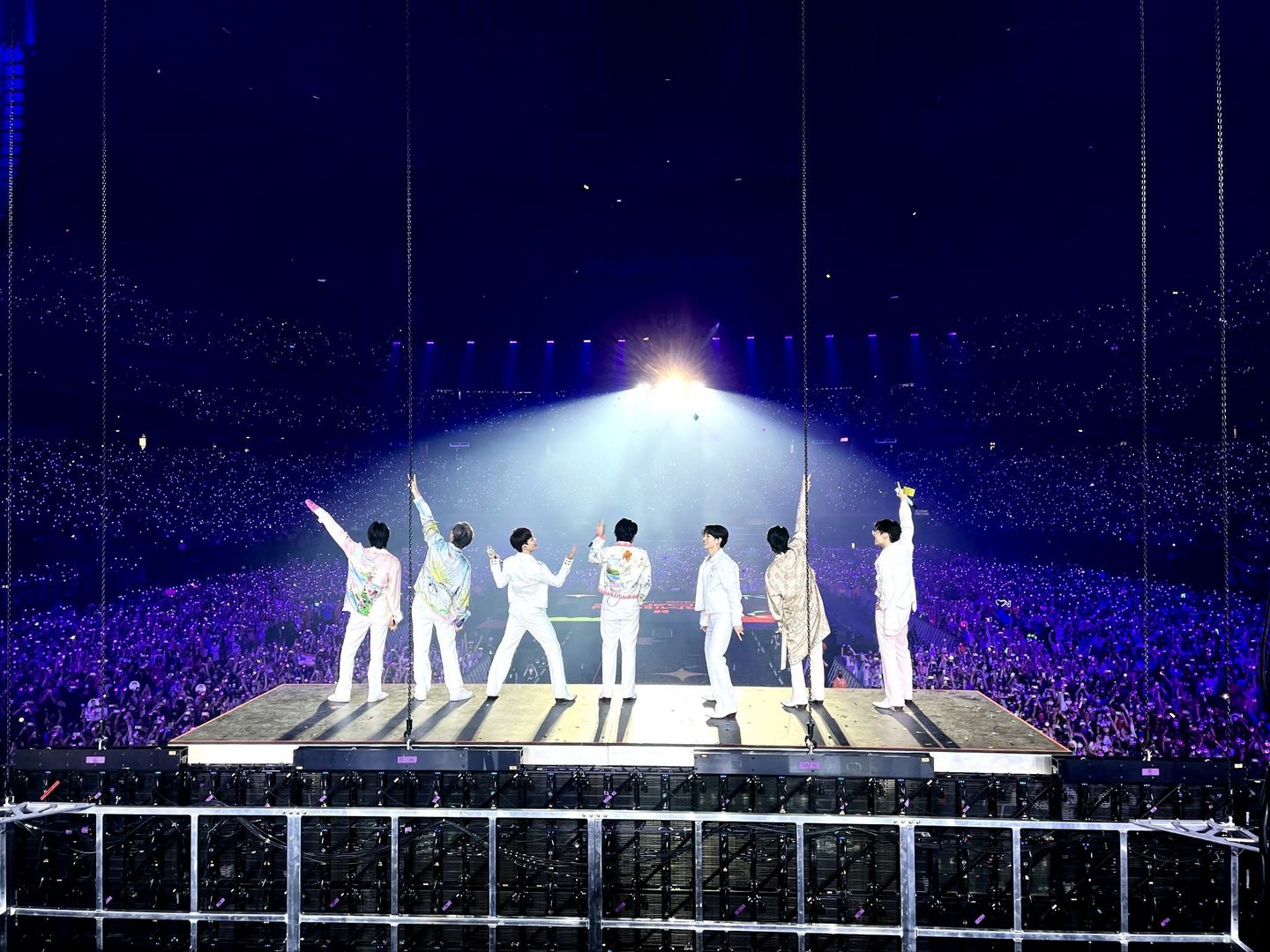 In Las Vegas, over 200,000 fans attended the show in person, while another 22,000 watched the LIVE PLAY event at MGM Grand Garden Arena. After a total of twelve shows (five of which I’ve seen online), the PTD concert series came to a close with over 4 million ARMYs (fans of BTS) attending in person or watching on the internet.

This was the fifth PTD ON STAGE concert they were streaming online, and since it was part of the tour, it pretty much had the same setlist, save for a few songs here and there. Going into the shows you’d know what to expect from the red and white fits and pyrotechnics to the vibrant band and dancers from THE LAB. But that didn’t stop me (and thousands of fans) from tuning in each and every single time.

I had first heard of BTS back in 2016, when one of our writers pitched me a story about a K-pop group who leaned heavily into hip-hop and wanted to dive into their sound and influences. One year later, the same writer asked if we could cover the Manila leg of their WINGS Tour, where she shared her first BTS concert experience and how she met ARMYs from across the region. In 2018, I came across RM’s mixtape mono, and while I didn’t understand half the lyrics, the songs gave me this feeling of melancholy. I remember being enamoured with the video for ‘forever rain’. Throughout the years, this publication would cover new BTS releases, as well as their last Singapore concert for their Love Yourself Tour in 2019. It was not until the pandemic in 2020, like millions across the globe, that I would dive into the world of Bangtan.

I’ve read countless stories and tweets about how BTS would come into your life when you need them to, and that also held true for me. We were monitoring BTS’ YouTube records for ‘Dynamite’ at work, and that got me curious. Why are so many people tuning in? I had asked my sister to “Take a look at this, tell me what you think.” We watched the music video together once, and she said, “Cute. So fun.” The next day, I went into her room and she was watching a BTS video. They were blowing up balloons, cooking dishes, and frosting a cake. She made me watch 2020 FESTA, and from then on, we found ourselves combing through YouTube for more. It felt like the perfect distraction for the ongoing pandemic, especially since we were in the longest lockdown in the world. We couldn’t go out and see our friends, so we found 7 of them in BTS. Since then, we have signed up for VLive and Weverse, have gone on world tours, overseas trips (Malta is a favourite destination we keep going back to), staycations in the forest, and played all sorts of fun games every Tuesday night with our newfound friends.

Last Sunday, since the world has gradually opened up, we were supposed to have a few friends over to watch the online concert together. But life had other plans for us, as our household had to go into lockdown because of COVID-19, and somehow in 2022, we were back again in 2020. Everyone had to isolate themselves at home, so I ended up watching the concert in my room by myself. Since I had seen the earlier shows on the tour (thanks, Twitter), and had a writer cover the first day of the concert series, I knew what was coming. But I still paid attention to every single detail (and funny Filipino comments in the chatbox) I could see on my 1080p screen (I had a 4K ticket, but was at the mercy of my poor internet connection). The opening set of songs -‘ON,’ ‘Fire,’ ‘Dope,’ and ‘DNA’ - was a perfect balance of prowess and fun. It offered fans a peek into what you’re about to see for the next couple of hours - massive superstars, but at the same time, down-to-earth young men living their dreams. Slowing it down with the sombre ‘Blue and Grey,’ it prepared the viewer for (IMHO) the highlight of the concert: the magnificent ‘Black Swan’. I’ve always looked at 'Black Swan' as a masterpiece in all aspects – the stunning choreography - from the amazing synchronization by their legion of dancers to the members’ elegant and graceful movements, the poignant and reflective lyrics, all the drama on stage - feathers, water, the sound of wings flapping. For this performance, Jin, who had to sit out most of the main choreography because of a finger injury, still did the song justice by conveying so much emotion with his crystal clear vocals and facial expressions.

‘Life Goes On,’ a song that perfectly encapsulates pandemic life, eases us into the candy-coloured pastel world of ‘Boy With Luv,’ ‘Dynamite,’ and ‘Butter’. Even though I’ve seen that transition so many times, it never fails to make me want to go and live in that deliciously smooth dance break. The next set of songs brings BTS physically closer to ARMYs at the actual concert, but it also feels the same for us watching online. I’ve always wanted to see ‘Outro: Wings’ in this era, (that song was made for stadiums), and ‘Stay’ has really grown on me. Seeing them all let go in ‘So What’ and lose themselves in ‘IDOL’ takes us on a high that we never wanna come down from. While previous editions of the tour had encore staples like ‘Spring Day’ and ‘Mikrokosmos,’ the Las Vegas leg was a little different. BTS kept the energy up for the last segment of the show, perhaps to match the vibrant energy that BORAHAEGAS has given them, performing some of their most fun songs. ‘Go Go’ and ‘Anpanman’ are personal favourites so it was really a treat to see them live alongside ‘HOME’. As we were heading towards the end of the show, I found myself thinking of what it took for them to get here. The Las Vegas leg got off to a rocky start with J-hope getting COVID-19 days ahead of their departure, Jin undergoing surgery on his finger, and Jungkook testing positive when he arrived in the States. Somehow, everything worked out, and in spite of Jungkook and J-hope just recovering from illness, and Jin healing from his surgery,  all seven of them made it. Delivering a much-talked-about and iconic performance at the GRAMMYs, and four nights of high-energy sets at PTD ON STAGE, nothing could stop BTS from showing up with their best selves for ARMY. I've always been in awe of how BTS always move (and sometimes think) together as one. In his closing ment, J-hope revealed that "missing one member is always a risk," but that they must always put their members' health first. He commended Jin for showing up to practice despite his injury and making sure his space was never empty. He also shared how special their last three weeks in Las Vegas were, and that "we won't forget them until the day we come back." In turn, Jin shared how BTS move as seven members, as one team, and how grateful he was to them for giving him the support he needed. "Though I got injured, because our team helped me like this, I was able to do a good stage. I'd like to take this space to say thank you to our team." SUGA and Jimin both mentioned how in their previous shows in Seoul, they couldn't hear the voices of the crowd (at that time, Korea had a no-cheering rule at concerts), and how difficult that was for both BTS and ARMY. "We have to hear the cheers and we feel alive," SUGA shared as thanked everyone for the "memories we'll never forget". Jimin added that "We are reminded we are happy because of you, and you're the reason we are happy." V gave a shout out to all the ladies and gentlemen in the audience, asking them to make some noise and to give their loudest cheers. "Thank you for coming to our concert and enjoying our show." Jungkook shared how happy he was to be able to perform and be with ARMY again. "You're the reason that I smile every day. So I hope I am your reason to smile as well." When it was RM's turn, the rest of BTS and ARMY cheered him on with Jin saying "BTS President" and Jungkook giving him a warm hug, and saying "Our boss!" The BTS leader revealed that "Our Permission To Dance is finally over." He went on to explain that PTD was just a one-time thing, but they wanted to present a "total package," and while it was tough for the members to perform a setlist full of group songs, it was what they wanted to share with ARMY. He also looked back at his first visits to Las Vegas - when he was a 15 year-old-student travelling with his parents, with BTS in 2014 when they were trying to get people to watch them in a free concert, and fast forward to the present. "We have to never take all this love for granted, that’s the one thing for sure. That’s the only thing I know. You know we’re BTS, you’re ARMY. We’re each other's everything. The show might be over, but our light will stay going forever." BTS closed the show, and the PTD era with a confetti-filled performance of ‘Permission To Dance’. As they wrapped up the finale, the members and dancers bowed to each other, a Korean gesture of utmost respect. While saying goodbye, Jimin and RM also gave big bows to the audience, with the latter staying in that position just a little longer. As they were giving their Thank-yous and See-you-soons, I hold on to Jungkook’s promise that this won't be the last time. There will always be a next time with BTS, whenever and wherever that may be - perhaps when you need them the most.

PERMISSION TO DANCE ON STAGE - LAS VEGAS will be available for delayed viewing on 23 April at 11 AM KST (9 AM JKT, 10 AM PHT/SGT) via Kiswe.