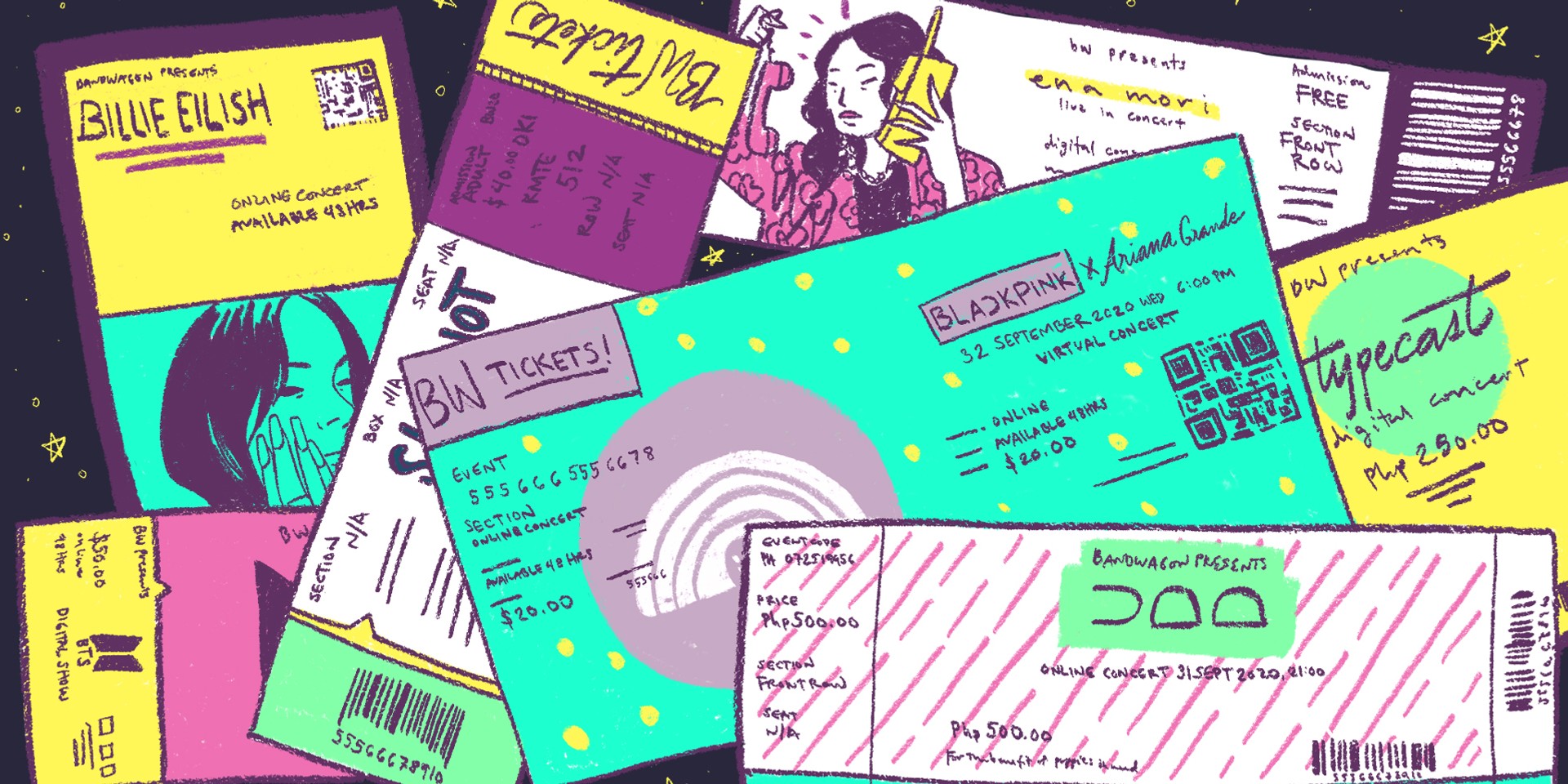 In case you haven't heard, there's a life-threatening pandemic that continues to plague the world. (Looking at you, COVID-19.)

Thousands of concerts and tours have been canceled over health and safety concerns, punching the entertainment industry right in the gut. Besides the artists whom we love and worship, the folks behind the scenes are also greatly affected by the virus. They're one of the first to shut down and likely will be one of the last to get back to business.

MMI Live CEO Rhiza Pascua told Bandwagon in an interview that the early days of the pandemic felt like a "10-minute break for live music," until it turned into a complete standstill. "That, combined with an uncertain economy, remains a big threat to our industry," she added.

But it doesn't have to be all doom and gloom. To keep the music scene alive and kicking, artists have been throwing online gigs through Facebook and YouTube. They've even taken things a step forward by holding paid full-production sets and special concerts—while practicing phyical distancing guidelines—in quarantine. It's their way of making a living these days. People have to get more creative in order to augment their income.

In an interview with Kerrang!, Lamb of God guitarist Mark Morton said that setting up these virtual shows is a way for the industry to adapt to the times. "I think it’s fun to try to figure that out and put your own stamp on that and to make the platform your own. [...] It’s not the same, but we have the technology and the ideas to make it work – there’s a spontaneity to it, a uniqueness, and that’s part of the excitement.”

When it comes to excitement, Polish metal act Behemoth took things to the extreme with their worldwide streamed event In Absentia Dei. It was a whole deal—not just your typical band-rocking-out-on-stage kind of situation. They set up an entire production—fire, rituals, sacrilege, and all—that no one had ever seen at a live concert before.

In the world of K-Pop, SM and JYP joined forces to take fans to concerts with the help of AR technology for the ultimate interactive experience through Beyond LIVE. In an episode of Spotify's For the Record, BTS member V revealed that the best part of their job is offering their work to their ARMYs. He said, "They're the reason we perform. And it's their energy and their support that allows us to keep going. So they, our ARMY, our fans, are really the best part of this job."

Going online is a completely new experience for concert promoters as well. In an interview with Bandwagon, Christian Rijanto of Jakarta-based events company Ismaya Live revealed that they've been working hard to offer the Indonesian-made branded experience to the world on a new platform.

He said, "Our approach in creating [We The Fest] has always been part of the culture of the company and the brand, and therefore what we will show in WTF will definitely be special and different than what other people are offering."

On the plus side, setting up these digital events also helps get techs and roadies paid, while big live shows are nowhere in the horizon. In support of For The Nomads, a fundraiser dedicated to touring crew members in the music industry who are out of work due to the pandemic, Lamb of God vocalist Randy Blythe pitched in with an Instagram post, writing, "There is no tour or show without the road crew—they work twice as hard as any band member for none of the glory."

And it's true. Let's not forget Tom Petty once said, "I think the general public has no idea what roadies do. Bless 'em all. I just play the songs. They make the show happen."

If you look close enough, you can find the silver lining to almost anything. Here are 8 reasons why you should get a ticket to your first virtual concert and why they aren't so bad: 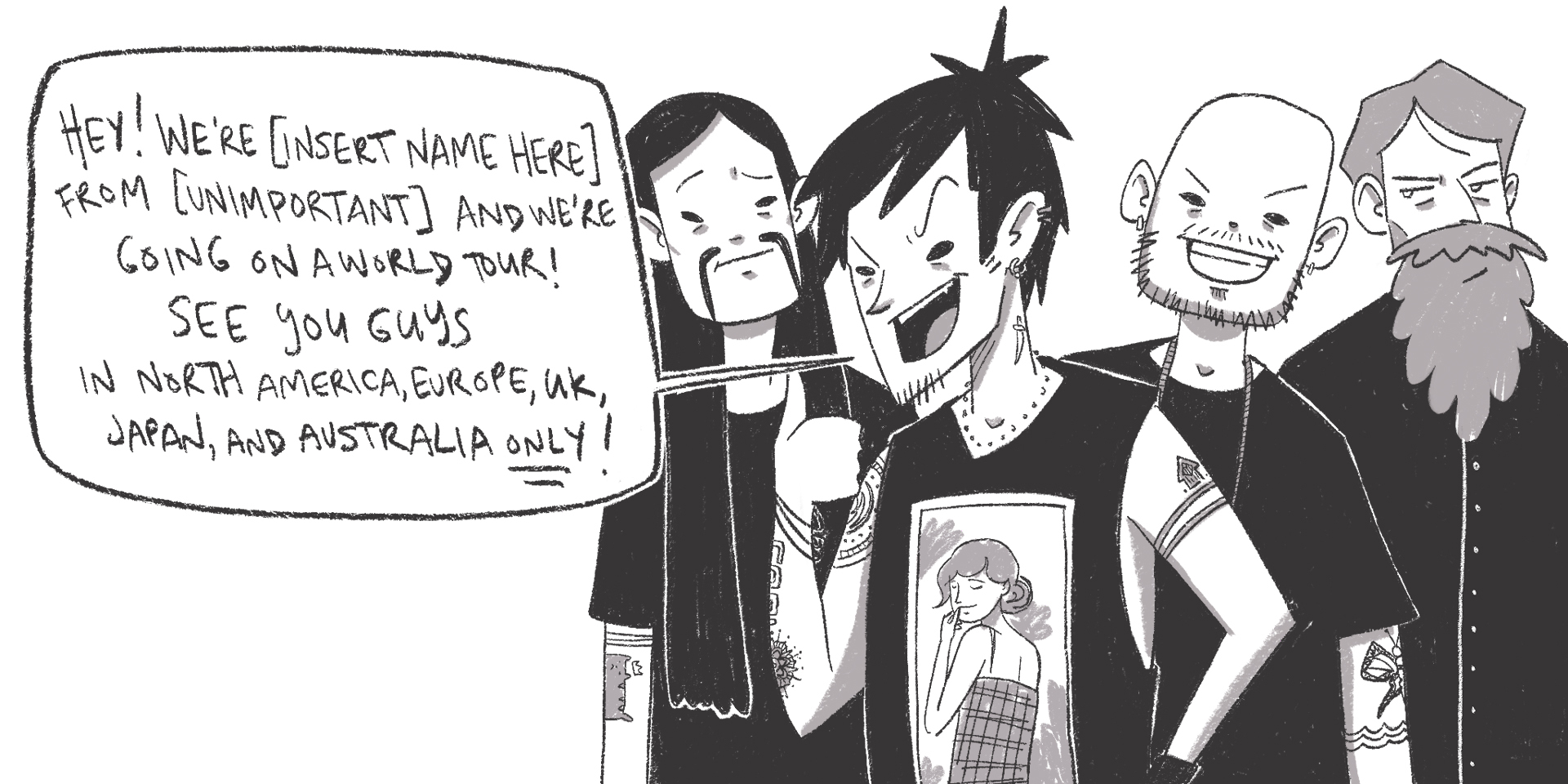 Let's face it—we South East Asians have become numb to the disappointment that comes when a band we love announces a "world tour," but doesn't include our cities in any of those dates. It's as if we're not part of this world. As if we're part of a completely different timeline and we just don't know it—conspiracy theorists, you're welcome to jump in on this.

Artists and labels opening up to the idea of mounting online concerts cancels this torment of feeling left out of tours. With online concerts, the world becomes united through the power of music and digital moshpits at the same time—Bill and Ted style.

They're essentially cheaper (if not free) for "front row" seats 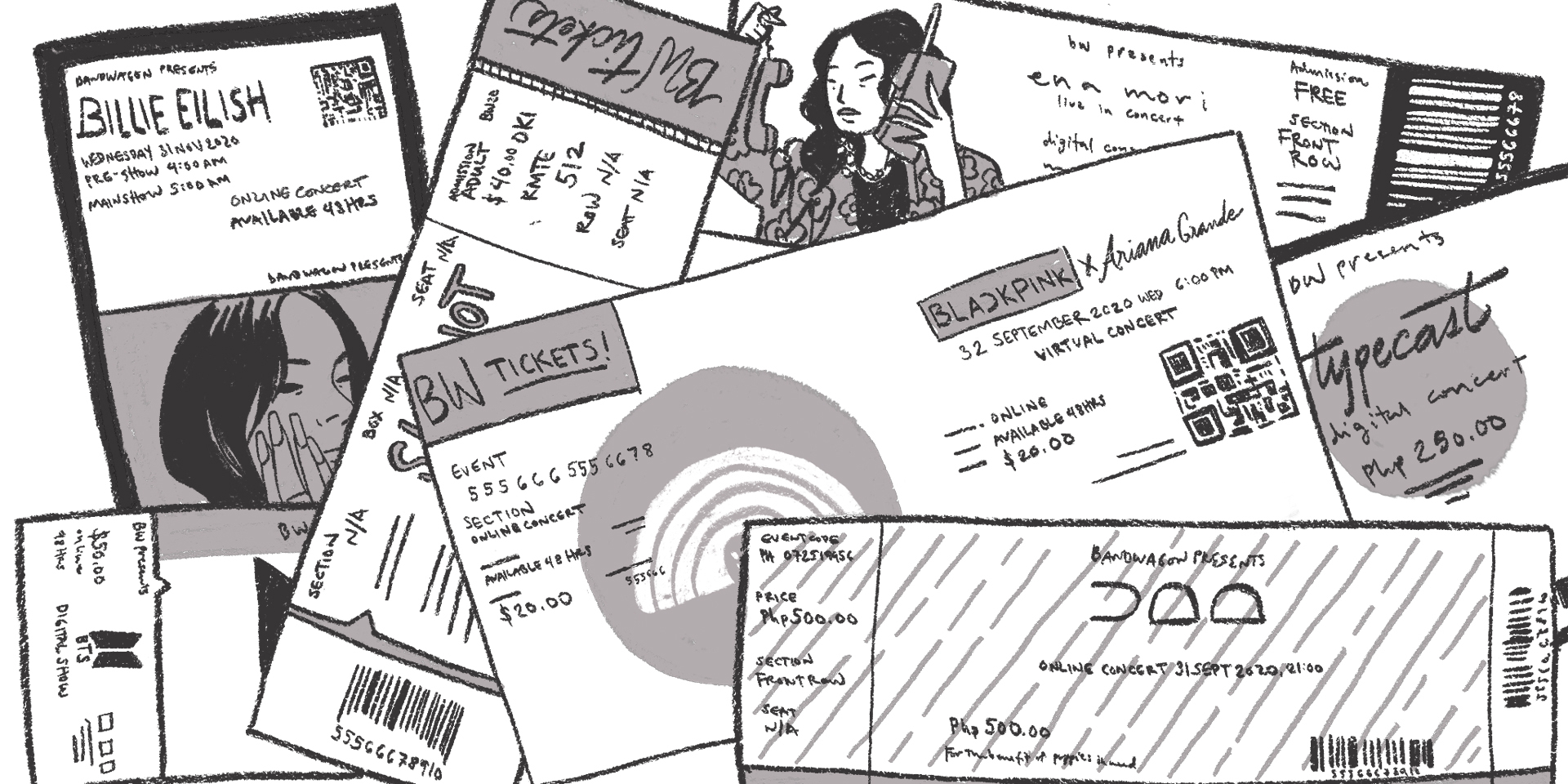 Okay, first off—paid concerts can't be for everybody. These are trying times. Not everyone has the money to catch a concert right now. That aside, if you think about it, buying tickets for an online concert to support your favorite bands is essentially cheaper for die-hard fans to spend their well-earned cash on.

Early Bird tickets to Lamb of God's 2-night concerts this past September were sold for only $40 USD, bundled with an exclusive event shirt. Plus, fans were even treated to performances by Bleed From Within and Whitechapel before the main event. The shows were even available to watch again for 48 hours, so you could relive it or not feel bad for not waking up for the 5 a.m. livestream.

British singer-songwriter YUNGBLUD had something else in mind for his The Weird Time of Life Virtual Tour. Instead of throwing just one worldwide stream, he tweaked the world's idea of the traditional touring life by scheduling multiple digital shows with "limited seating" to adjust to different timezones across the globe.

Global superstars BTS, whose massive world tour was cancelled, is looking to break their previous online concerts sales record from 2019, with their 2-day streaming, multi-view screen, 4K resolution event MAP OF THE SOUL ON:E in October with ticket prices ranging from $43 USD to $86 USD for the two dates plus the exhibition.

Compare those prices to scoring tickets for front row seats at an arena show in Manila. If you still feel your wallet crying, at least it isn't wailing over tens of thousands of pesos. 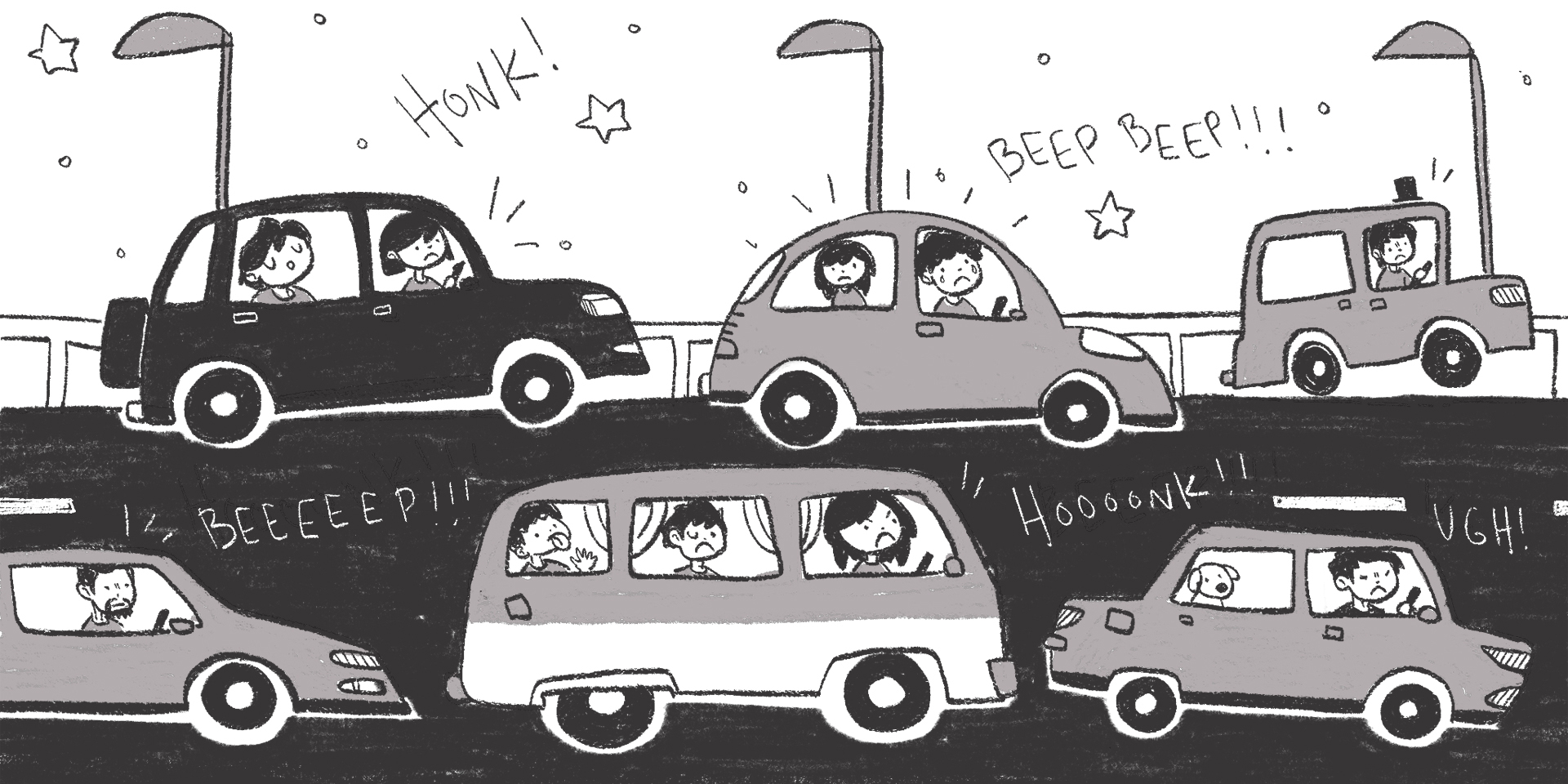 One of the downsides of hitting up a major concert is having to face hours of traffic before and after the show (Third World problems, am I right?). You're tired when you get to the venue. You're even more tired on your way home. Plus, there's that thing with parking. If the venue doesn't have a designated parking area, having to find a spot could really suck.

Anyway, you can't leave the house right now, even if you wanted to get stuck in traffic on purpose. Stay at home! 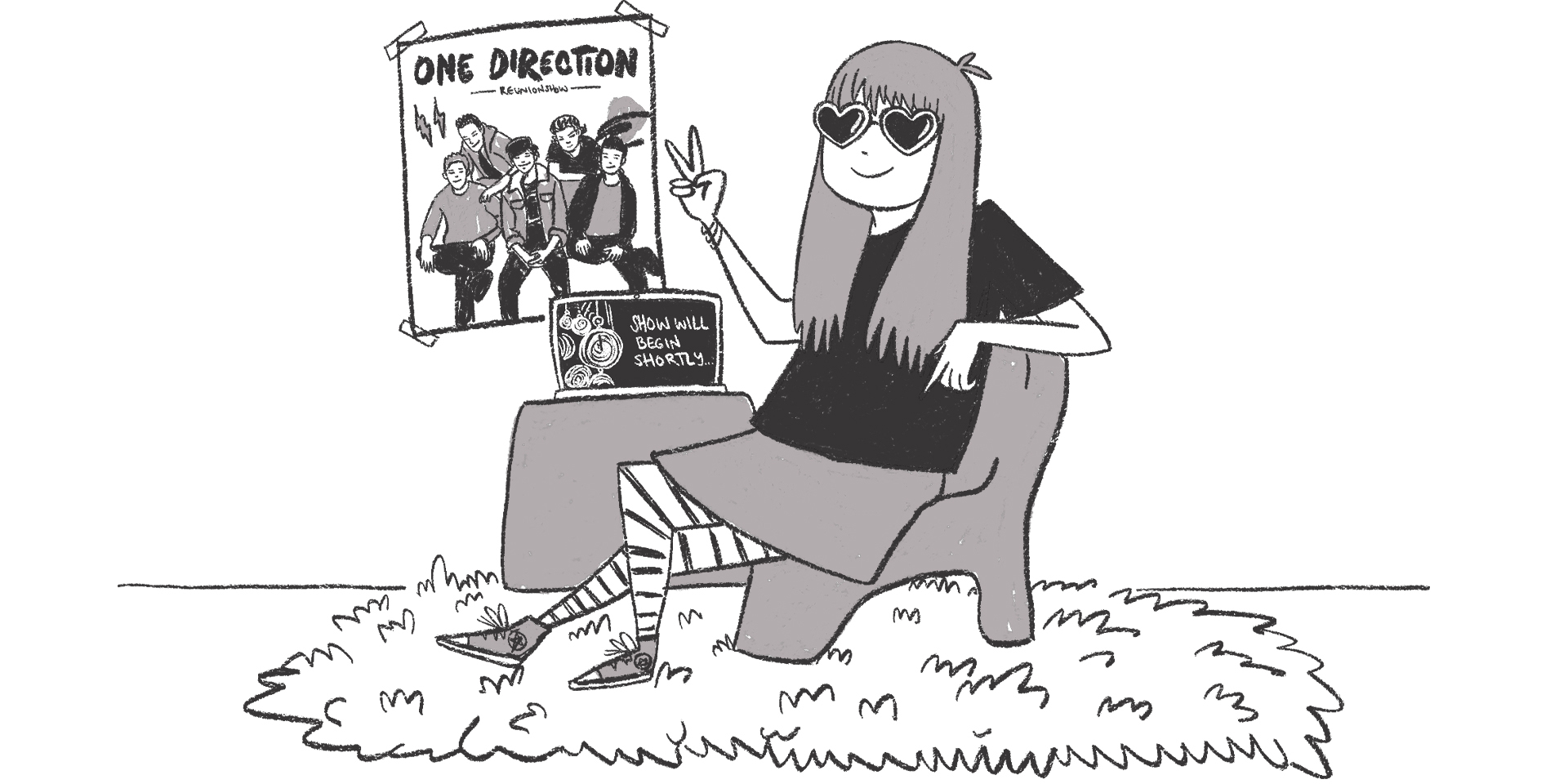 Next to not having to watch your childen grow up in traffic, you can just chill and hang back while waiting for the show to begin from the comfort of your home. You can even wear anything (or nothing) and not be judged by the cool kids.

Get comfy! Watch the concert from your favorite chair or from your bed. It doesn't matter! 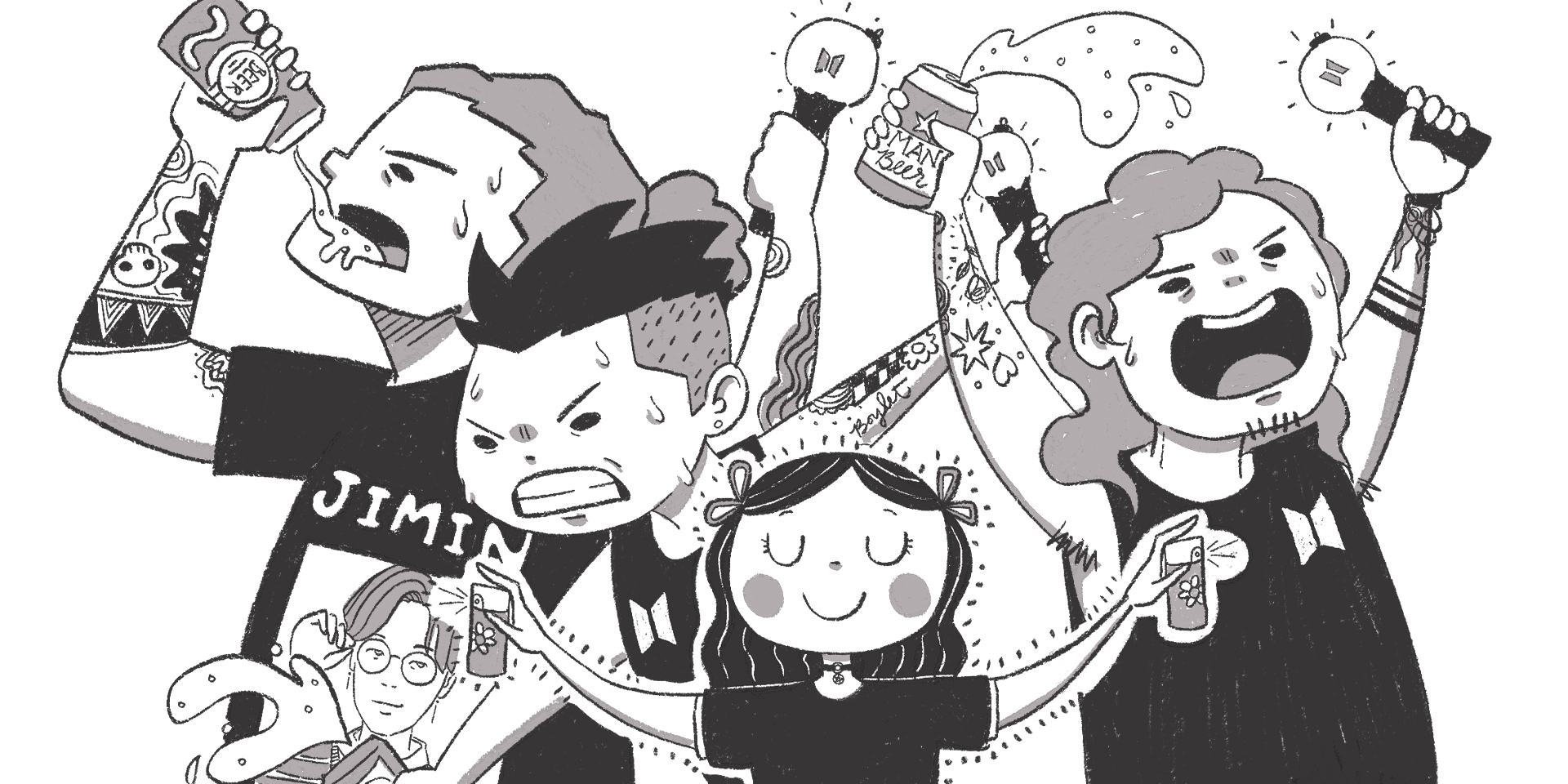 A true staple at any show is the omnipresent scent of man sweat and beer—especially when you're all about that rock and roll, heavy metal, PULP Summer Slam life. It's there wherever you go in the venue. Next level soldiers of the mosh may even encounter that non-breezy breath of portalets, which you'll never have to inhale at home.

So, kick back. Light that ocean breeze scented candle or turn on your air purifier, 'cause you're in for a nasal-friendly night.

You'll never miss a single moment at an online show 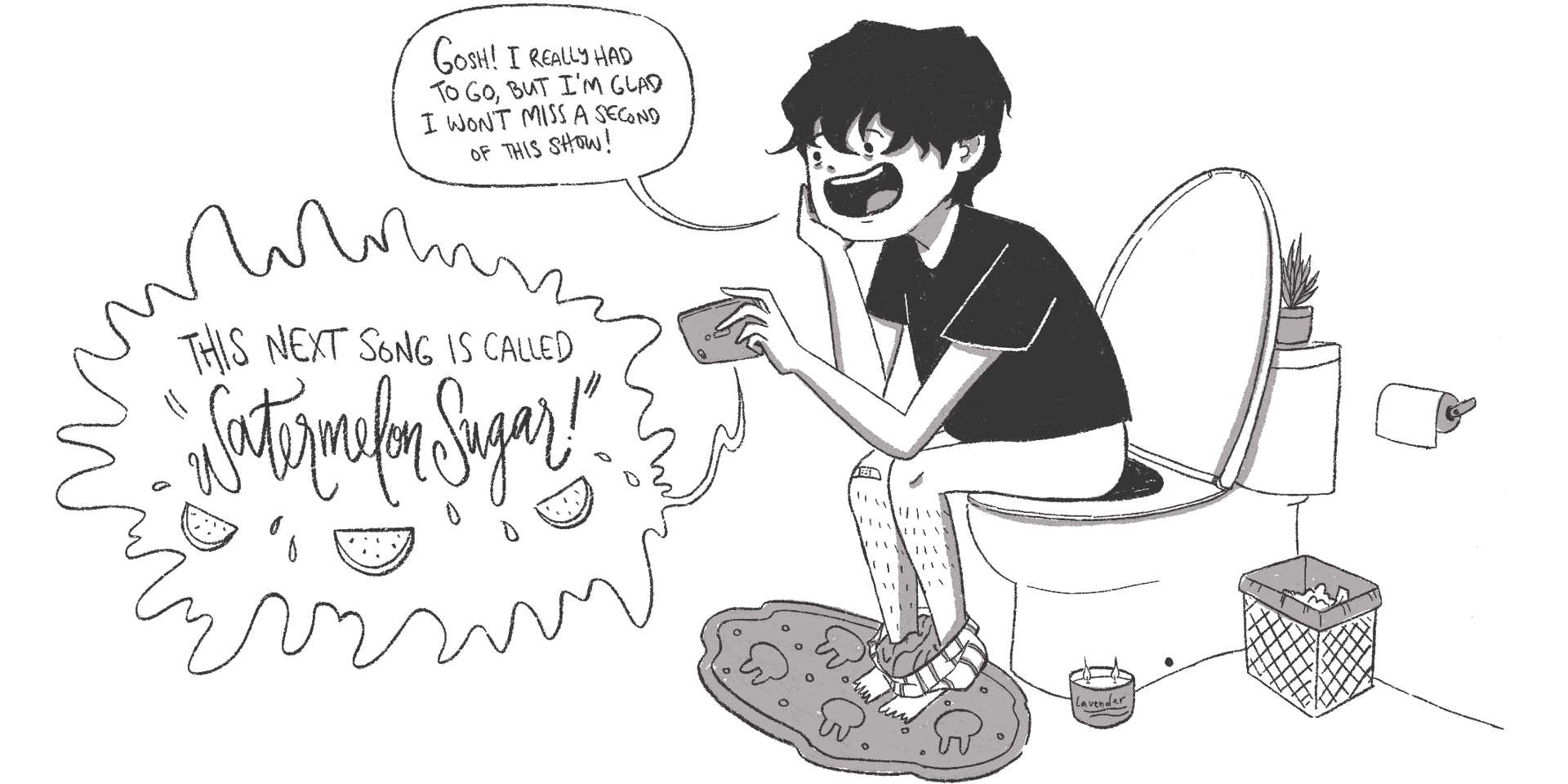 Are you the kind of in-quarantine person who's always on the go at home? Do you constantly find yourself shuffling through the kitchen to feed your family or getting drowned in the mercy of your now-work-from-home day job/studies? If that's the case, you need not fret over missing a concert again.

With the power of technology, you can freely bring your online concerts with you wherever you go. You can't do that at a show in the real world! These days you can carry concerts with you in your pocket or on your lap. Just be sure to charge your gadgets beforehand (and not drop them in the toilet).

Plus, most online concerts are available to stream again for a limited time, if not forever in the digital landscapes of the internet. So even if you can't catch the initial broadcast (because it happens during ungodly hours), you can always see it at a time that works best for you. 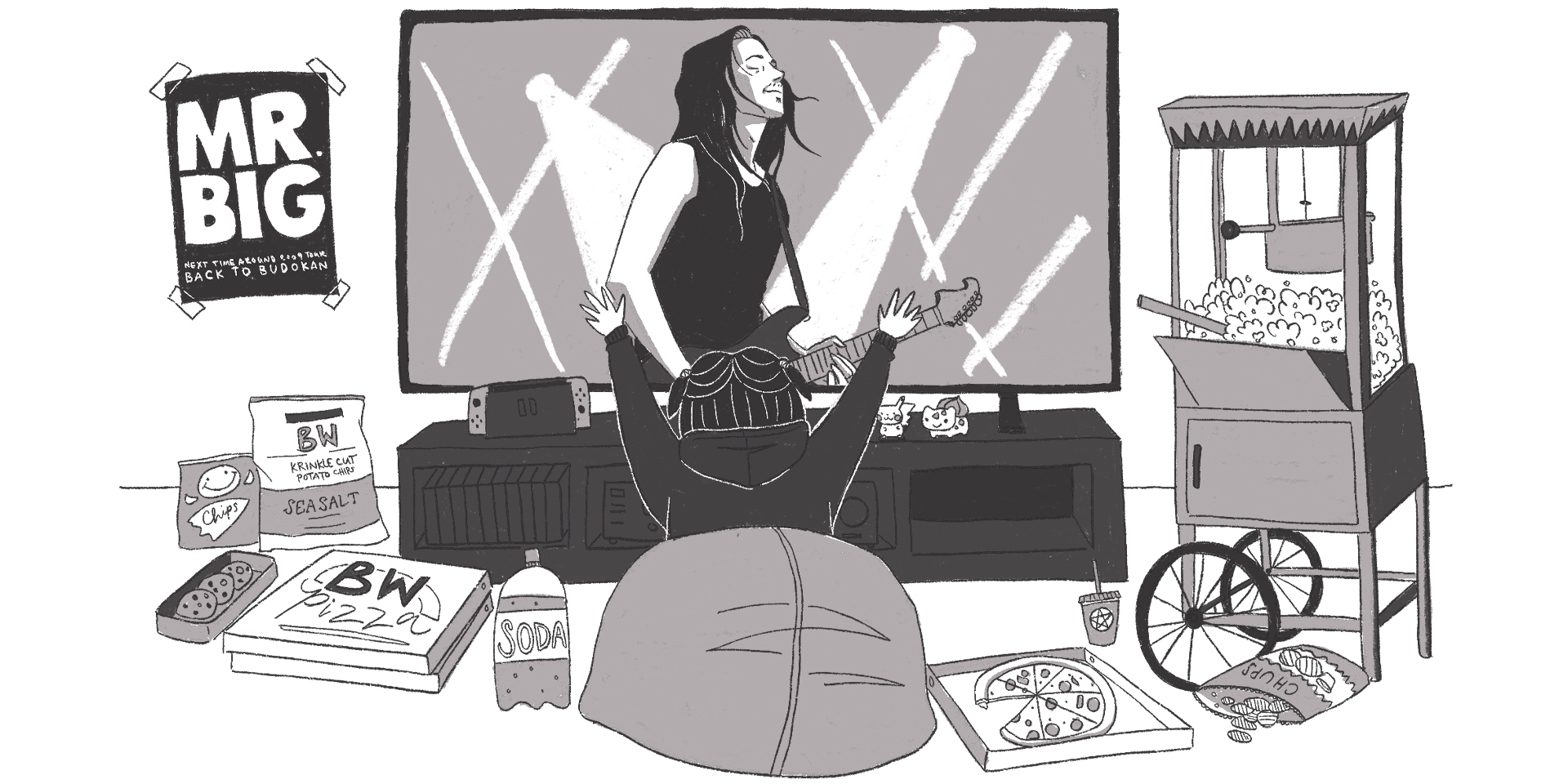 Eating is a part of any life event. Celebrating your birthday? Get a cake. Got promoted? Buy a pizza. Can't get over Jungkook's new man bun? Eat a whole gallon of ice cream. Whatever is going on, it's best to have your favorite food within arm's reach for a grand time, even at a concert.

Some venues offer concert-goers pizza, hotdogs, and popcorn from their stalls, but they could be overpriced and not that yummy. What if you wanna throw down in the middle of a circle pit with a sizzling plate of sisig? Unfortunately, you cannot do that at a live concert (for safety reasons), but you can do that at a digital concert!

You can even throw your own custom productions to keep things extra exciting in these virus-filled times. Turn your living room into a music festival with all your favorite food. It's gonna be so much fun! 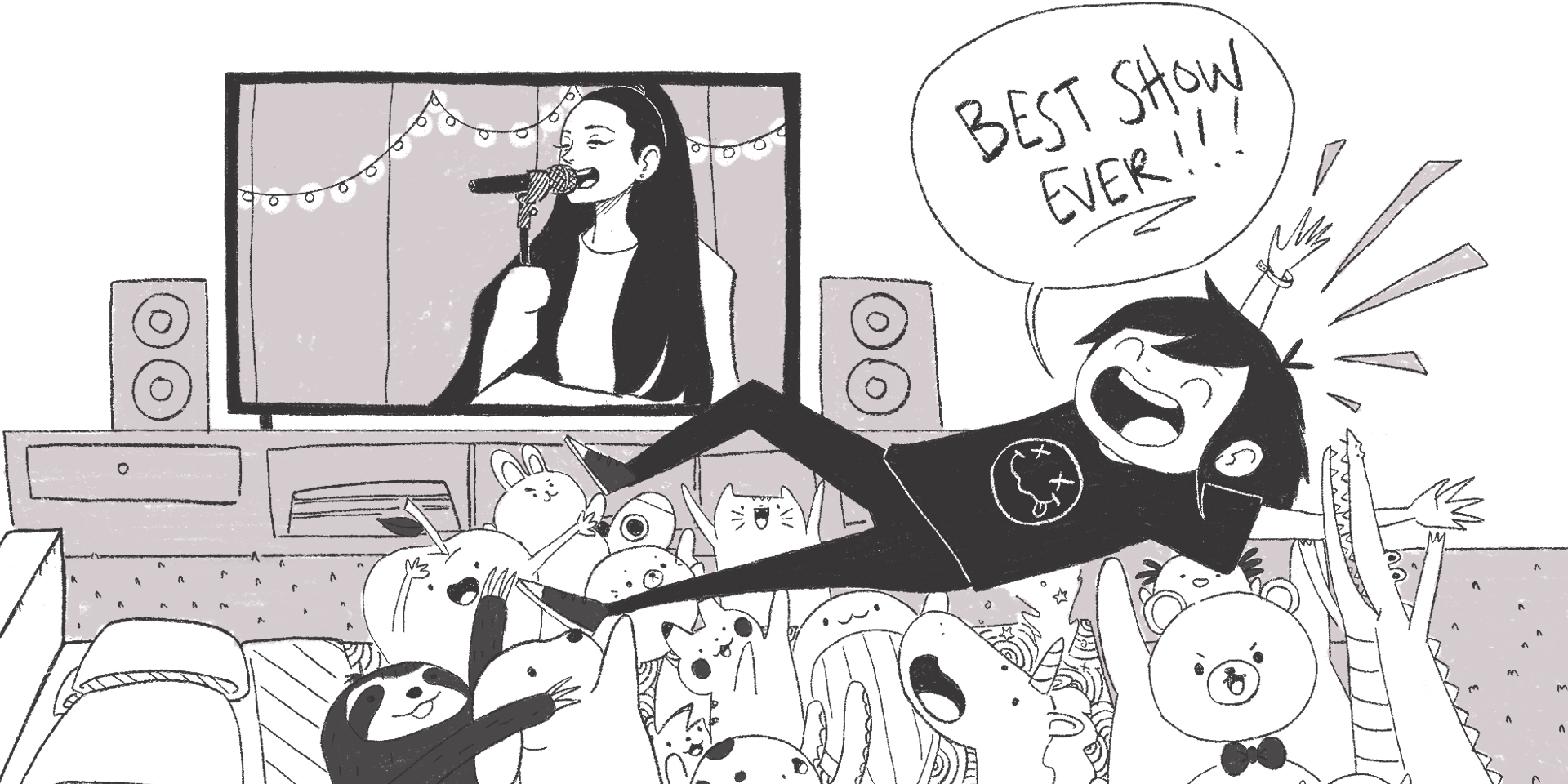 Starting a moshpit by yourself isn't as sad as you think it would be, especially when you have someone to enjoy it with from a distance. Get a pair of tickets with your best friend whom you haven't seen because of the pandemic. Catch them on FaceTime or Zoom and freak out over how good Zayn looks right now or how that Jae and Seori collab saved your life.

It's a pretty fun experience, one that would really let you appreciate the ones who truly matter to you but can't physically be with right now.

Plus, you can totally just jump into bed and go to sleep right after the show. Where else can you do that?