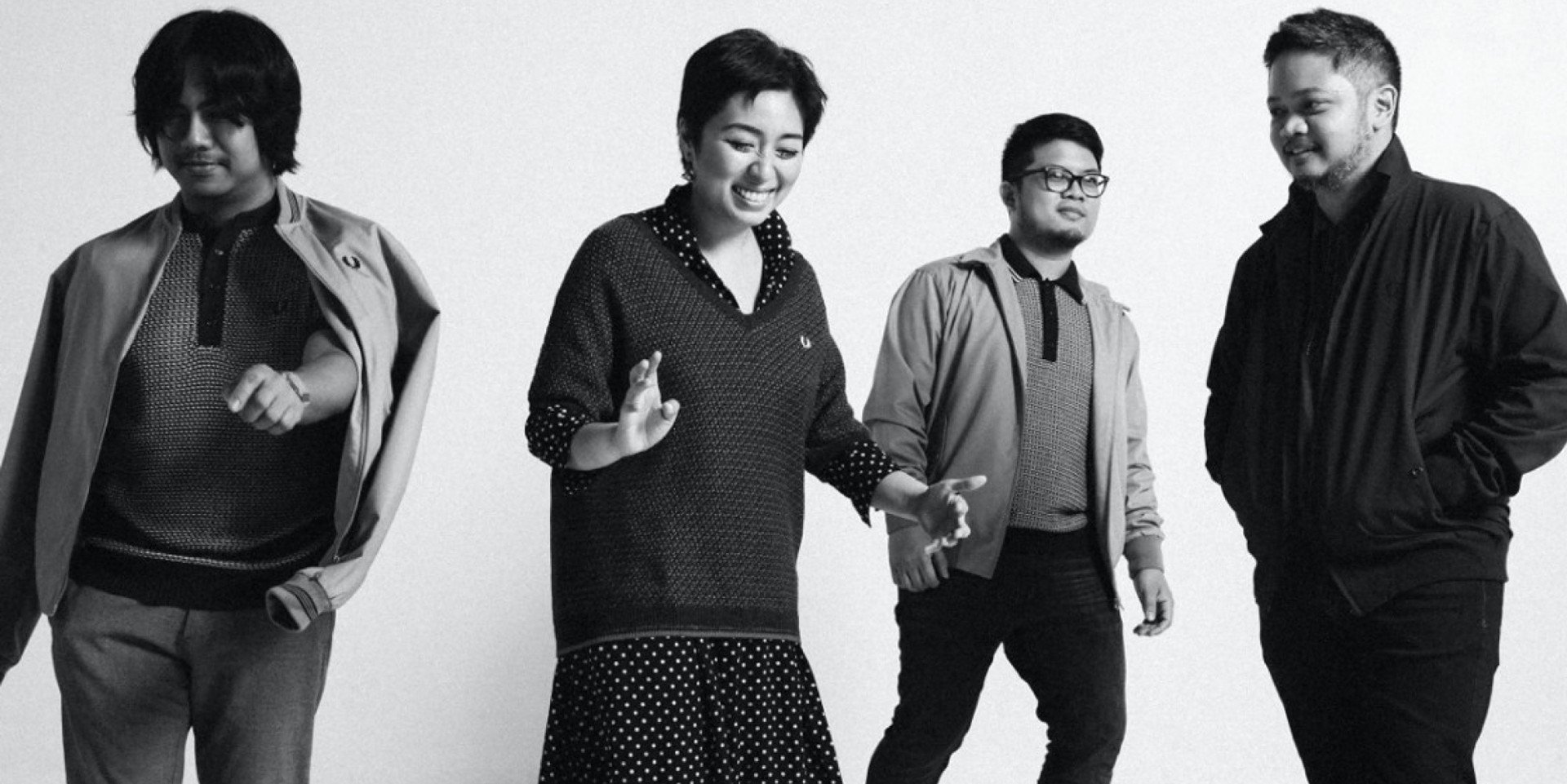 UDD's self-titled album pays tribute to their biggest influences, friends, loved ones, and everyone who's been there from the very beginning.

The 11-track record comprises of stories that go all the way back to the yesteryears of UDD. Through joy and heartbreak, the 'Sigurado' act pieced together a whole new collaboration they'd never attempted before. It's packed with different sounds, including strings and horns, and a maturity that shines through despite all the struggles they'd faced over the past seven years.

Bandwagon sat down with UDD's Armi Millare, Ean Mayor, and Carlos  Tañada  to run through each track off their fourth studio album under Terno Recordings.

When was it written?

Armi: We did demos there and then yung refurbishing of everything, sa studio na niya (gestures to Ean). Sakto tapos na, kasi it took that long to finish everything (laughs). He got to finish a studio! How long did that? Mga three years?

Armi: We did that in Paul's house.

Carlos: Actually, may pinarinig sila sa akin na inspiration and then I was trying to mimic it sa guitar, pero parang kulang. So I picked up the bass—I bought a second-hand guitar in Japan, eh. I played it sa bass and was like, "Oh, mas bagay 'to." And then si Paul, 'di pa siya nagsa-slap at all, so medyo nainis siya. Because of that naman, nagsa-slap na siya.

Sorry, the song inspiration that Ean let me listen to was Boz Scaggs. Ean told me na "do something like this," but I made it bass na lang.

Armi: I wrote that for another film in 2015. Just like a short part of the culminating part. The film involves the moon and the two lovers, hence the lyrics. That song from that arrangement, which had strings and everything, completely changed. Carlos was the one who did a lot of the arranging.

Armi: We did this at home, pero the demo was yours (gestures to Carlos).

Carlos: This was around the time that Prince passed away. I made a riff na feeling kong pwede kay Prince.

Armi: It's a tribute song to Prince. Originally we wanted to call it 'Minneapolis,' where he's from.

Every year, we tried to fix that song to fit the upcoming album. It just never worked. It's an interesting journey. I think Ean can put out an entire album of the different versions of it.

Carlos: Yung mahirap sa song na yun, acoustic guitar and then the goal was not to make it sound folky.

Carlos: Change the chords behind it, but retain melody, then add what we like.

Armi: I feel like it's a song that's not made for live consumption. People react to it live. As the person who's been performing it, the people who made it, it's time to put it to rest. We've gone past that stage ten times over, but we can't help it because people know it, people like it. And in a way this is an ode to the listeners and the fans.

Whenever somebody congratulates me now with the album, I always say, "it's for you guys". We already have had our own self-indulgent moment creating this album. That's seven years of self-indulgence. We enjoyed making it. It was our goal. It was painful, but then we wouldn't come into the studio if we didn't enjoy working with each other in the music sense. Pero it's really for the listeners. It's really a tribute to a lot of things and people.

Armi: I wanted something Aaliyah or Janet Jackson, and then I told Ean, "Let's do something '90s, 'cause that's around the time we were born (laughs)."

I mean, our cognizance in music happened at that time. A big part of our musicality is in the '90s. A tribute—I think this like is a tribute album. At this point, we already know what we enjoyed listening to growing up. That's different from the artists that inspired us to start Up Dharma Down. Those are two entirely different things.

Armi: 'Say Nothing' was a song I did for UDD way back in 2009, I think? 2010? I did that for the third album, but it didn't make the cut. So I did a few arrangements of it on my own, but they had a change of heart and accepted my child.

Armi: Yeah, because it's in the same key.

So was that like your evil scheme to add the song to the album?

Armi: Perhaps! Subconsciously, it was there. I was happy my child was accepted into the fold by these snobs (laughs).

Moving on (All the Good Things)

Armi: That's originally the lyrics actually of 'All the Good Things,' but we were doing the song for a client and it had to reflect everything absolutely positive on all angles. From "moving on to new things" to "I'm new to all the good things," kasi parang "moving on" is like you're leaving something behind, but that's not a bad thing. So now, we wanna use that version.

And it does sound different from the original version.

Armi: Yes, with the acoustic guitar. This was Pointbee [Multimedia].

Armi: Bagay sa feel, kasi if use acoustic with the dynamics of UDD, you won't hear it so much. But with that, it's so soft.

Armi: It was supposed to be a six-day shoot, then compressed into three days. But it was memorable for us. I remember we were looking up the [Supertrees]. We were near that, and I was like, "When we're old and wrinkled, we'll remember this shoot."

Armi: We got stuck together for three days. Early 'til late, so it's impossible not to be friends.

Armi: This was written for a telco, and we did that in 222 Studio.

Armi: For the ones who don't have dates or are about to lose their dates and they sort of know.

Do you still have these demos?

Armi: The way he did it was so poetic that the time wasn't even 4/4. Since it's for a client, we had to make a few adjustments. It could not have been the same form as it was and it had to be a full-blown song.

For me, it's like an exercise in empathy. You exercise first with his line, you try to think in the same terms, you write something in that [mindset], and then his again, and then I try to relate to it again. I think this was the first song that we really collaborated on na switching stanzas. It's a different technique I'm happy to do.

I wish Paul were here to explain his side! But we should probably leak his demos.

Armi: You know, even against his will.

Armi: 'Crying Season' is the last demo that I got to write for the album. It was written for Sherwin [de Guzman], our road manager who passed last year, July. Everything about the song, the music kasi, it started [with] piano when I wrote it. Parang everybody came together, putting in things that we all felt Sherwin would like.

Carlos: We were all so devastated. We were so sad talaga. I decided to arrange, put instruments sa song na yun. Nilagay ko yung what I felt playing, a little bit in the solo. They were telling me to change some parts, pero parang it was one take lang eh. I didn't want to change it. I mean, I re-recorded it cleaner, but the notes and melodies, I kept them at the moment that I made it. That's what I was playing when I was so sad. I didn't want to change it. If you listen to it, it's paulit-ulit, typical bluesy riff, pero for me it's deep, man.

So it really was what you were feeling at the time.

Armi: We wanted to preserve it.

Carlos: Yeah, so I just re-recorded it lang with a real amp so it sounded cleaner.

Armi: We had Malek Lopez and Junji Lerma and some really talented musicians, kasi we didn't have enough time to spend in the studio. We were supposed to close the album na, so we really made sure we had the best people we could get in the same room.

It's interesting because we never thought we'd reach the point where we'd be using strings and horns. I remember Ean didn’t like it when we were younger.

UDD are set to return to Singapore for a headlining show this August and are scheduled to tour the US this September with IV of Spades. They are slated to release their self-titled album on vinyl soon.