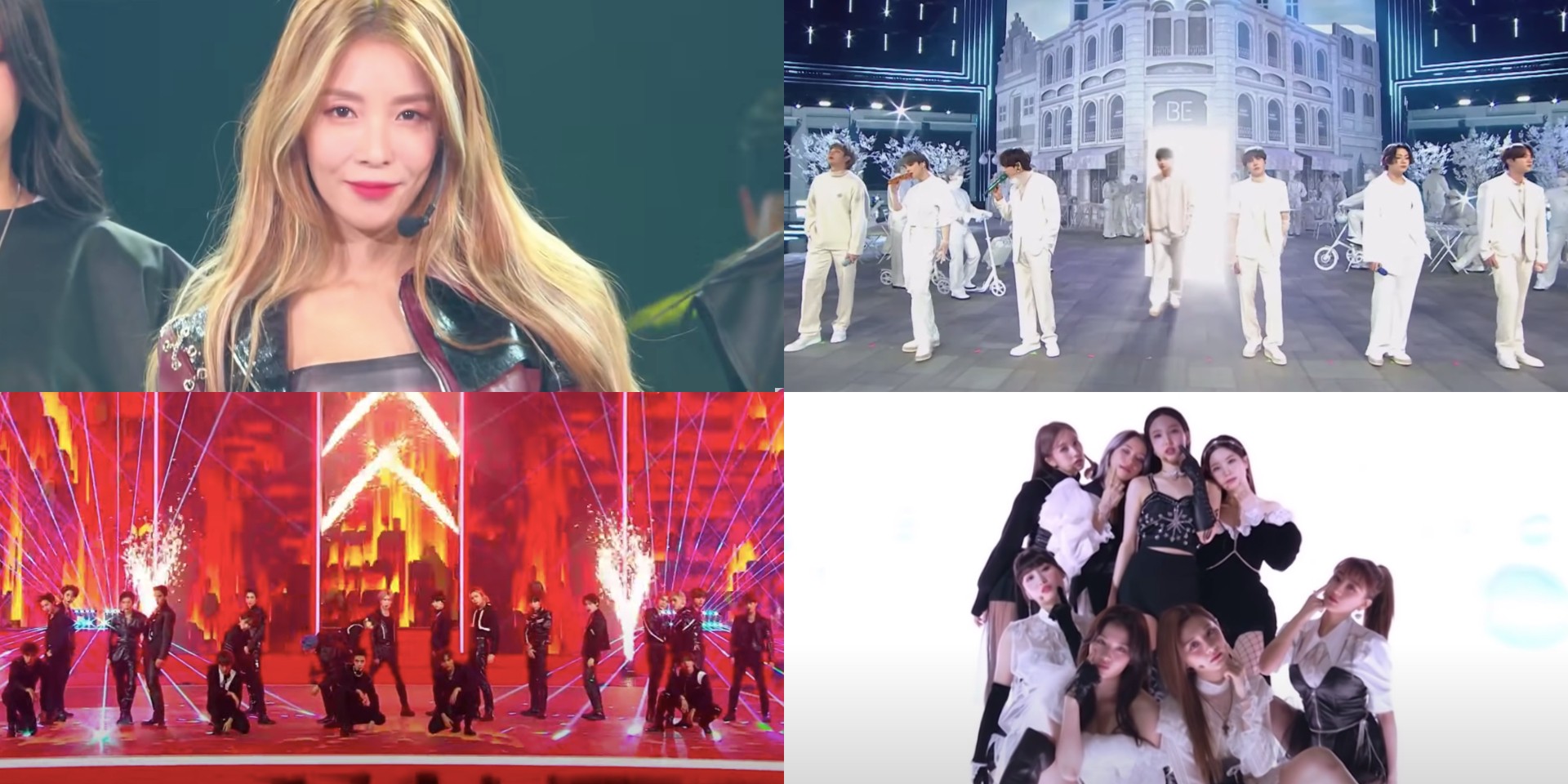 One of K-pop's major events has come to a close over the weekend, marking the soon-to-be end of awards season.

Taking place for the first time as a virtual affair, this year's Mnet Asian Music Awards swept across the industry as a global music festival, with some of the biggest acts nominated and performing at "NEW-TOPIA". Hosted by actor Song Joong Ki, MAMA 2020 was live-streamed to countries all over the world, celebrating K-pop and its top acts for its 22nd edition.

Alongside winners including the likes of BTS, NCT, and TWICE, the performing lineup had also left a huge impression on the awards show audience, with flawless vocals, choreography, and the incorporation of cutting edge stage effects. While we can't list all of them here, we rounded up 10 of this year's 20 over great performances from the ceremony, from Jessi and Hwa Sa's version of Rain's 'GANG', ENHYPEN's unforgettable first awards show stage, to Taemin's spellbinding opening, and more.

Jessi and MAMAMOO's Hwa Sa from supergroup Refund Sisters delivered a special take of Rain's viral 'GANG', which rose to popularity again this year. Surrounded by an entourage of backup dancers, the unique reinterpretation involved flashing lights, immaculate transitions between verses, and a whole lot of fearlessness in under two minutes.

ENHYPEN's performance at this year's Mnet Asian Music Awards had been the talk of the town for not one, but a couple of reasons. Despite the first artists from BELIFT LAB making their debut only a week prior, the group managed to stun the audience with incredible stage presence – sprinkled with unforgettable moments including Heeseung's intro, Sunghoon's ice-skating, and more. It's also worth noting that this was ENHYPEN's first award show stage, so soon after their career took an official flight.

In the "dawn of a new-topia", Taemin brought out tracks from his Never Gonna Dance Again series with a majestic and elegant flair. Performing the upbeat 'Criminal', a brief soft and mellow 'Heaven', and lastly the dark and groovy 'IDEA', Taemin's stage is one to watch if you're in for an all-rounded feast, from one of the biggest K-pop male soloists today.

IZ*ONE - 'Secret Story of the Swan'

IZ*ONE gave one of their many hit tracks, 'Secret Story of the Swan' a simple but stunning performance dressed pristinely in white. Armed with nothing more than their package as true performers, the 12-member girl group showcased their exceptional choreography and vocals in one single performance that we wish had been longer.

Making her grand return is BoA, the Queen of K-pop, in time for her 20th anniversary. While her new and 10th album Better is out, BoA revisited 'No. 1' and 'Only One', giving the audience a nostalgic ride down memory lane together with Taemin, who joined her for a sensational dance scene after waiting for her with a bouquet of flowers.

Refreshing the viewing experience is five-member outfit TXT, who made an appearance at their second year of MAMA with a dance break version of their latest bright pop tune, 'Blue Hour'. Backdropped by a changing cityscape from buildings, to a Ferris wheel, and rose-tinted hues, TXT's performance was a welcome change of pace from the myriad of other acts, offering a lighthearted and aesthetic treat to get everyone perked up.

Besides the mystical, luminescent fairyland in 'MORE & MORE' and the pulsing disco lights in 'I CAN'T STOP ME', TWICE also surprised everyone with an unreleased song at the Mnet Asian Music Awards, with a trippy and mesmerising world for 'CRY FOR ME'. Flaunting their ability to perform songs of every mood, whether it be something sweet and catchy, or confident and power-packed, 'CRY FOR ME' made a statement to the global audience, proving that TWICE are a versatile act and force in K-pop, even with songs that didn't make the final official cut.

Emerging from the smoke and destruction of battle, ATEEZ delivered an awe-inspiring performance of 'INCEPTION + Answer', characterised by darkness, charisma, their impactful dance moves and unwavering vocals. While the performance was to go on without Mingi, who is temporarily taking a break from all activities, many eagle-eyed fans pointed out the ways in which the members had "included" him in the performance, from his silver microphone to signature moves.

With a powerful monologue in various languages, NCT came on the Mnet Asian Music Awards stage with all 23 members, ready to thrill fans with their highly-anticipated single, 'RESONANCE', from their second full-length album. As the track was freshly released last week, this was the first live performance of 'RESONANCE', and the first time all 23 members were together at once on stage.

Like a scene from a movie, BTS performed their Billboard chart-topping single, 'Life Goes On' as the world comes to a standstill due to the pandemic. However, due to a shoulder injury, SUGA was not able to perform physically with the rest of BTS – and instead showed up for fans and group members via hologram, through a door that materialised mid-performance. Later, as the song approached its end, time resumed and colours were restored – akin to the effect BTS set out to achieve with their latest album, BE.

Check out the rest of the performances on Mnet's official YouTube channel.