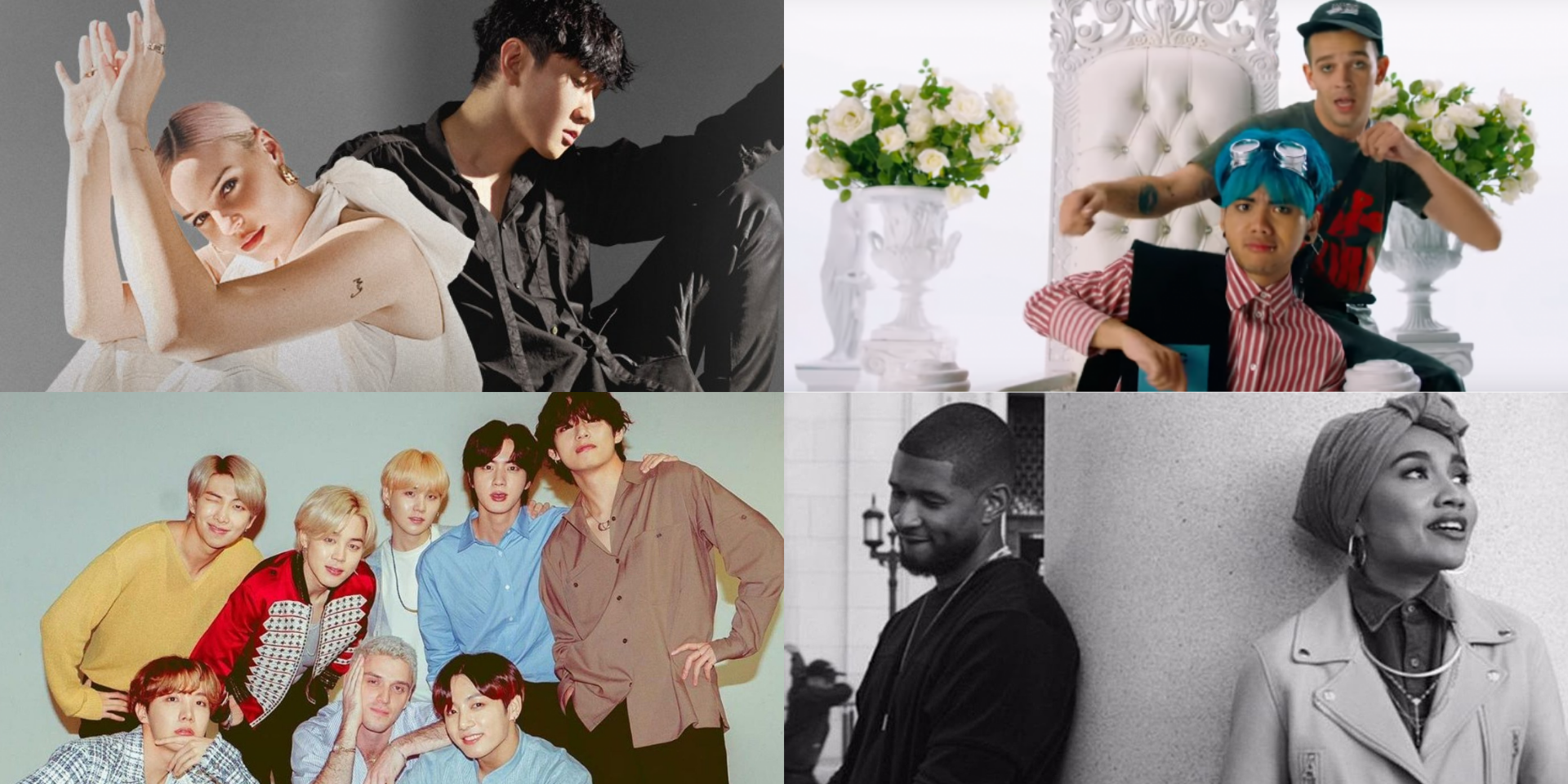 With today's instant connectivity, music collaborations have never been more prevalent. What used to be only possible when in a shared room, can now take place even when artists are on opposite ends of the world. More and more unprecedented collaborations have emerged, with a number of Asian artists teaming up with western names.

Bandwagon has put together some of the top cross-country collabs of recent years - read on to find out which tracks made it on the list!

Despite the pairing being an unexpected one, Singaporean mandopop artist JJ Lin's smooth voice and British singer Anne Marie's powerhouse vocals make for a remarkable track. The heartbreaking song is sung from two different perspectives, and has already garnered more than 10 million streams on Spotify since its release.

This is not JJ Lin's first collaboration with a Western artist – he previously teamed up with American singer-songwriter Jason Mraz on a song titled 'I Am Alive'.

The best of R&B come together in this sultry track by Yuna and Usher.

"I feel a little rush, I think I've got a little crush on you," croon the duo as they sing about the beginnings of a new romance. The track was so well-received that it gave the Malaysian singer-songwriter her very first Recording Industry Association of America (RIAA) Gold certification.

According to Yuna, everything was done over email, with her sending the song to Usher, and him replying with a recording of him on the track. Since then, Yuna has also had her fair share of collaborations with Western artists including the likes of Pharrell Williams and G-Eazy.

Global pop icons BTS have collaborated with a slew of artists from across the globe, but Lauv was one of the first Western artists to team up with the 'Butter' act. A song on Lauv's ~how i'm feeling~ album, 'Who' marks BTS and Lauv's second time working together. Their first collaboration was a remix of 'Make It Right', a song from BTS' 2019 MAP OF THE SOUL : PERSONA album.

The track begins with Lauv singing about his troubled relationship, while BTS' Jimin and Jungkook hop on the track in the second verse.

Dubbed the Prince of V-pop, Sơn Tùng M-TP has been making waves not only in Vietnam but also abroad. His 2019 single 'Give It To Me' was a collaboration with none other than iconic American rapper Snoop Dogg. Complete with reggaeton and synth beats, the song also had a thrilling music video that featured scenes in a lavish mansion, a yacht, and more.

The video broke the record for being the fastest music video in Vietnam to reach a million views. To date, it now has more than 200 million views on YouTube since its release in 2019.

Is This All - Van Ness Wu and Ryan Tedder

An oldie but a goodie, we couldn't leave out this collaboration between Taiwanese singer Van Ness Wu and OneRepublic's Ryan Tedder. Written by Tedder, the track was the theme song for a drama starring Wu titled Material Queen. Wu is also known for being part of Taiwanese boyband F4, a group that achieved fame starring in the drama series Meteor Garden.

Apart from Van Ness Wu, Tedder has also collaborated with numerous artists including K-pop acts like BLACKPINK and TWICE.

British pop-rock band The 1975 hops on a track with Filipino artist No Rome in this fun song about a flawed relationship in which the other party is a "narcissist". Both artists have been friends since being signed to the same label, Dirty Hit. No Rome made an appearance in the 'Chocolate' act's music video for 'TooTimeTooTimeTooTime', and also opened for them on tour in 2019. They recently teamed up for a track titled 'Spinning', which also featured British pop artist Charli XCX.

Take a look at the playful music video which features The 1975's lead singer Matty Healy and No Rome dancing around to the synth-pop track.

One would probably never have expected award-winning band DURAN DURAN to collaborate with a Japanese pop band like CHAI, but they did. The opportunity came about after CHAI got signed to US label Sub Pop.

"It was such an unusual piece we weren’t quite sure if it would fit in at first. It reminded me of one of those retro Japanese video games, which I always found quite uplifting," explained DURAN DURAN keyboardist Nick Rhodes. "We all agreed that it would sound really great with Japanese female voices on it, and that’s when Simon had the inspired idea to ask CHAI if they would possibly collaborate with us."

CHAI have also previously collaborated with American artists Gorillaz and JPEGMafia on a song titled 'MLS'.

A song that features a mixture of Hindi, English, and Tamil, 'Chammak Challo' is the epitome of a melting pot. The addictive track was an instant hit after being featured on the 2011 Bollywood film Ra.One. The track has multiple remixed versions, including a viral one that featured Senegalese-American artist Akon.

What makes this collaboration stand out from the rest is that Akon actually sang parts of the track in Hindi, a language he was not familiar with. He also had a hand in co-composing the track.

The enigmatic Jasmine Sokko may hide behind different masks all the time but one thing's for sure – her music is definitely worth a listen. In her latest single 'Cannibal', the Singaporean EDM artist teamed up with Rema Lovelis of American band Hey Violet for a hypnotic track with a heavy bass beat.

The duo also released a trippy video visualizer for the video. According to Sokko, Hey Violet members Rena and Nia co-wrote the track, while Casey helped shoot the scenes of Rena for the video.

Kiss And Make Up - Dua Lipa and BLACKPINK

British singer Dua Lipa first met BLACKPINK at one of her shows in Seoul, where she later asked if they were interested in featuring on her track, 'Kiss And Make Up'. Even without heavy promotion – a music video wasn't filmed – the song still managed to secure a spot on the Billboard Hot 100 chart. The song was also included on BLACKPINK's setlist for their In Your Area tour.

The K-pop quartet has also collaborated with other Western artists, including pop singers Selena Gomez and Lady Gaga.

When fans heard that GOT7 member Jackson Wang would be linking up with rapper Gucci Mane for a track, they immediately knew it was going to be a hit. Hyping each other up, the hip-hop artists spit rhymes about having a "different game". The song was co-written by both artists and is sang entirely in English.

The music video was also an entire production by itself, filmed in multiple locations including China and Hawaii. To date, the video has more than 19 million views on YouTube.

Whenever You Call - ARASHI and Bruno Mars

Longtime J-Pop band ARASHI has been in the music scene since 1999, but this is their first time working with a Western artist. For their 2020 single 'Whenever You Call', the group enlisted the help of American singer-songwriter Bruno Mars. Written by the 'Leave The Door Open' singer, the track also marks ARASHI's very first English release.

The song was one of ARASHI's last singles before they went on hiatus in late 2020.

"Yo, what up this big Snoop Dogg," raps the American artist as he opens the theme song for the Bollywood movie Singh Is King. The song released in 2008 was Snoop Dogg's first venture into the Bollywood music scene. It was a collaboration with Akshay Kumar, who also played the main lead in the film.

The music video features the rapper clad in a traditional Sikh costume as he raps about "hanging out in Mumbai". With the rhythmic drum beats and addictive flow, it's easy to see why it was such a viral track at the time of its release.

Feelings - Up Dharma Down and Paul Buchanan

Filipino band UDD (Up Dharma Down) is known for their emotive lyrics, and their collaborative track with The Blue Nile's Paul Buchanan is no exception. Titled 'Feelings', the song is a stripped-down track about a doomed relationship.

Buchanan's raspy vocals and vocalist Armi Millare's expressive voice come together perfectly in the melancholic song. "You left and you were right, so I have to let us down this time," they sing. "What are you crying for, when it's just a feeling?"