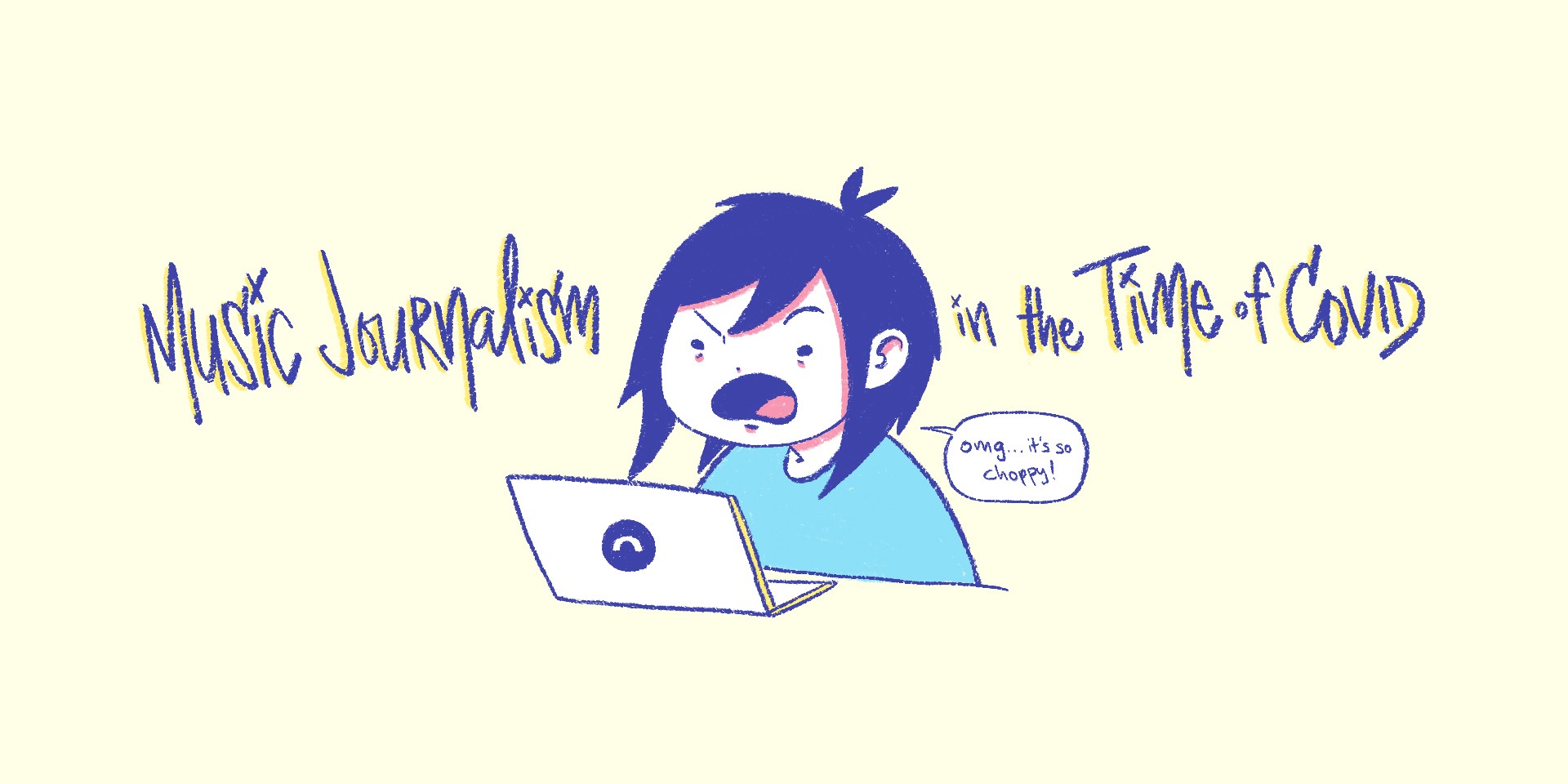 Music journalism is a pretty cool gig. We get to talk to artists, superstars, and people who make dreams come true. We're given access to the biggest concerts in town and witness firsthand how artists work. We even get to listen to music before its officially released.

But then, everything changed when the coronavirus attacked.

The entire world came to a stop early last year. Nobody knew what to do or how to move. Studios and venues were forced to shut down during community quarantine. Concerts and tours were being postponed indefinitely. Artists suffered in isolation. It was a really tough time, and these heart-wrenching events immediately became part of a music journalist's news cycle.

Eventually things started to ease up. Musicians found ways to get over their slumps and livestream concerts became a thing. People were writing songs again. The world was (kind of) getting better. There's a hopeful tune that sings through the air now, and us music journalists are following it to make sure the rest of the world hears it too.

This is what life is like for a music journalist in the time of COVID:

Our souls belong to the Internet gods Let's face it. Without the internet, this generation is almost completely useless. We rely on the web to learn, connect, shop, and save us from boredom. But it's a whole other ballpark for modern day music journalists, especially in the time of COVID.

Since we can't exactly go out like the night prowlers we used to be, we sit in front of our devices and do as we do. There aren't any physical shows to go to, no artists who should be getting in-person interviews, and (what may be the most painful of all) no coffee shops to work from. Everyone and everything has gone digital, but that isn't exactly a bad thing.

As our friends from Avenue Q once sang, "The Internet is really, really great..." for work. Thanks to all these new apps, we're always connected and are able to cover ground that we never really got to do before: we've spoken with musicians and folks behind the scenes, attended press conferences all across the globe, caught shows in different countries that would've cost a lot of money to physically be at.

Things have gotten a lot easier for everyone who knows how to click on a Zoom link. All hail the Internet gods!

We are time zone zombies We love what we do. Promise! It's a whole lot of fun and countless music fans dream of doing what we do. But dealing with different time zones—for calls, shows, or announcements—could be a bit of a drag.

You know how people say you should get 7-9 hours of sleep every night? Well, we're lucky to clock in 4 hours of sleep. We probably don't hold the same resolve as doctors who make rounds for 24-36 hours and save lives, but lacking sleep really does take a toll on your physical and mental health.

And since we're always online now, it could be difficult to find that coveted work-life balance.

Moshing in the digital pit Back in the day, when bands would announce world tours, they usually meant a tour across the United States—sometimes with stops in the UK, Europe, and Japan. But now with the ongoing pandemic, a full-blown tour is nearly impossible without a band or crew member testing positive while on the road.

A new thing that popped up in the time of COVID is the livestream concert. Instead of hopping from stadium to stadium, artists can now deliver a killer performance in one go with the entire world watching. The likes of BTS, Billie Eilish, Dua Lipa, Joji, and WOODZ successfully put up some of the most unforgettable shows during the pandemic last year, but now promoters are taking things to the next level.

After taking concerts to virtual reality on Sansar and video games like Fortnite and Minecraft, shows and music festivals are going for inclusivity with fans on the grounds and fans catching their favorite bands through livestream broadcasts. There are so many exciting hybrid shows to look forward to—from BTS' upcoming Permission To Dance On Stage concert in LA to Slipknot's music festival Knotfest—and it's only the beginning. Who knows where the live music industry will take this next? Wherever it leads, you can be sure that us music journalists will be there, too!

"Sorry, you were choppy back there." Let's take a look at the world in the Zoom era. Being connected is great, but there's a divide in the digital civilization between those who think of it as a blessing and those who curse it to the deepest circle of hell.

Yay: We can easily overcome limits that held us back before these video conference apps came into our lives. Honestly, there are so many interview opportunities now!

Nay: We often have to deal with odd hours to fit the schedule of everyone, especially if we live on opposite sides of the world. It gets pretty exhausting.

Yay: We get to talk to some of the biggest artists in the world!

Nay: But then sad internet speeds can destroy this dream. Not to mention noisy neighbors, dogs, and home renovations.

Yay: Attending press conferences and meetings in a row without having to leave the house.

Nay: Missing all the people we met at these events...and the free food. Speaking of interviewing your favorite artists and the biggest honchos behind the scenes, things can get a little more intimate than you'd hoped thanks to video calls.

Imagine talking to Lorde in your pajamas, digitally meeting SB19 with extremely tired eyes, or attending a press conference with PANTHEPACK from your messy bedroom (yes, we did all three). These are things you'd never really do in real life outside the digital space.

At the same time, we never thought we'd get to see the inside of mxmtoon's neat living room, the green and gold Victorian aesthetic of Olivia Rodrigo's bedroom, or the many appliances in Rich Brian's homey kitchen.

It's these little normal things—together with their candid selves, bad lighting, or low-res cameras—that humanizes artists. It's kind of nice. And in a weird but special way, it's something we'll always share with them in our hearts.

A new attempt at photoshoots Back when the world was new to the mess of the coronavirus pandemic, figuring out how to continue living out our lives was depressing: no more shows, no more in-person interviews, no more photoshoots. But we couldn't just feel sorry for ourselves forever. We knew at one point we'd have to live with it and live with it we did.

In June last year, we got our photographer Iya Forbes to set up a photoshoot with Raymund Marasigan, Jim Bacarro, and Champ Lui Pio for a special Father's Day feature. We'd never done a remote shoot like this before, but it turned out pretty great.

We also took this opportunity to let artists explore photography through self-portraits. Rico Blanco gave us some fantastic shots of his quiet, somber life in quarantine. A year later, we asked him for more shots of his life now, and let's just say he's doing a lot better.

Let us slide into your inbox There are music journalists out there who've also turned to delivering content straight to your inbox through newsletters. All you need is to give them your email and you can be sure to receive highlights, news, and exclusive interviews to expand your knowledge and celebrate the music industry.

If you have any music stories or press releases you'd like to share with Bandwagon, feel free to email us at editorial@bandwagon.sg.