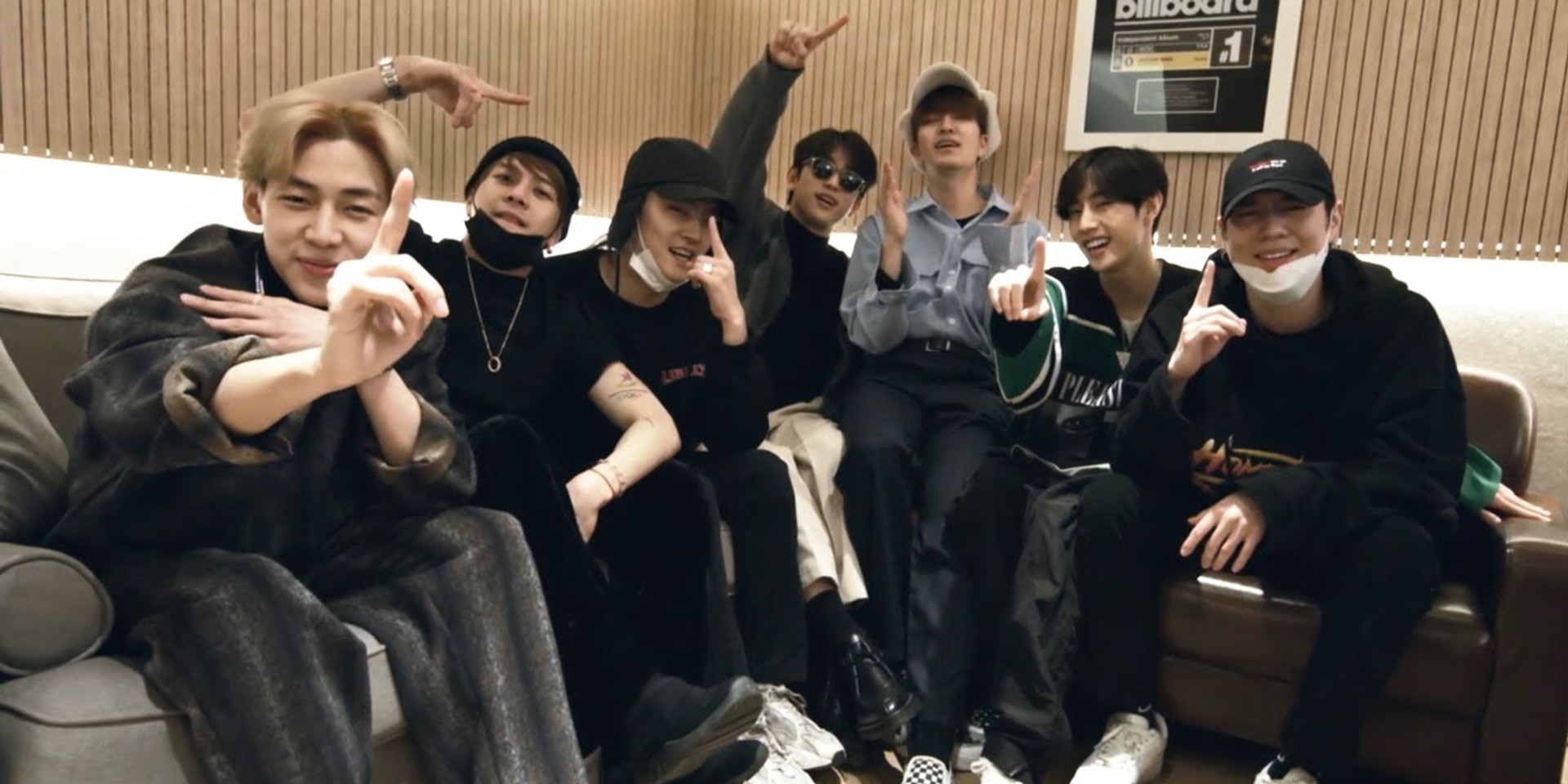 This time last year, I—alongside many GOT7 fans—was in disarray when the seven-piece announced their departure from their long-time label JYP Entertainment.

With barely any information out there at that time of what's to come, IGOT7 (GOT7 fans) or Ahgases were left with many questions. But while we were left in tears and confusion, the 'You Calling My Name' act had a special surprise up their sleeves with the surprise release of 'Encore' a month later.

Serving as the end of a chapter and a "see you later" to their fans, the track was a comforting reminder that no matter what happens, it's seven or nothing.

Since then, a lot has happened. JAY B, Mark, Jackson, Jinyoung, Youngjae, BAMBAM, and Yugyeom are all pursuing their solo careers—while of course, giving us some GOT7 crumbs along the way—and have had several projects that go way beyond music.

To commemorate the year that has passed, here's what each GOT7 member has been up to.

JAY B's next move came much later than the rest of his members but nonetheless exciting. In May 2021, on a motorcycle ride through the desert, the singer revealed he was joining the coveted hip-hop label H1GHR MUSIC that's home to acts like pH-1, Sik-K, WOOGIE, and GroovyRoom.

In an interview with Bandwagon, the singer revealed that while starting his solo career was a scary ride, it's a new adventure he's looking forward to.

"I thought it would be a fun challenge and adventure. Since it is a fresh start, I want you to expect it as it is. I'll try my best to not let you down," said JAY B.

To kickstart his new chapter, JAY B dropped 'Switch It Up' with rapper sokodomo, symbolising the next evolution is his musical journey. The single served as a preview into what was set to be his first-ever mini-album, SOMO:FUME.

Stepping into a style completely his own, the record was a deep dive into a world of soothing R&B, straying away from the pop and energy of GOT7. Wanting to showcase more of his own sound, the 'B.T.W' hitmaker is also set to release his first-ever EP as Def., his non-mainstream artistic persona.

Beyond music, JAY B also hosts a special R&B segment on the radio show STATION Z.

While Mark Tuan has spent most of the last year quiet, it wasn't without a few gifts.

After moving back to Los Angeles (coupled with a tear-jerking vlog), the singer-rapper released 'One In A Million', a collaborative track with EDM producer Sanjoy. "This is just the beginning," he said in an interview with Bandwagon.

Following his first solo track, Mark Tuan signed to Creative Artist Agency and even got into online content creation, having started posting vlogs on YouTube and streaming games on Twitch.

On the music front, the Taiwanese-American act worked on one of the biggest soundtracks of 2021. Joining the likes of Rich Brian, keshi, NIKI, Jhené Aiko, and Anderson .Paak, Mark performed 'Never Gonna Come Down' with BIBI for the official soundtrack of Marvel's first Asian-led superhero film Shang-Chi and the Legend of the Ten Rings.

To bookend a great year, Mark also released his emotive single 'Last Breath,'and is kickstarting 2022 with 'My Life'.

At this point, who hasn't heard of Jackson Wang? From global music collaborations to starring in a 13th Shanghai Biennale short film to sharing his journey at the Tokyo 2020 Olympics, the Chinese singer-rapper has been virtually everywhere.

Even prior to 2021, Jackson has already been building an immensely successful solo career which has only catapulted since departing JYP Entertainment. The 'Pretty Please' hitmaker founded TEAM WANG in 2017 and in the last year, has grown to become a global brand in music, design, and more.

Most recently, Jackson—under TEAM WANG—kickstarted a new music collective PANTHEPACK that comprises fellow Chinese acts J.Sheon, Karencici, and ICE. Together, the quarter are leading a new wave of music while simultaneously showcasing Chinese culture to the world.

"I've always wanted to make this crew to just have fun with music and hopefully, it's music that can influence and entertain a crowd. The whole idea of PANTHEPACK is that we're just four pandas who want to make a change in music," said Jackson in an interview with Bandwagon.

PANTHEPACK—which acts as a yearly project—released their first album THE PACK in September and has since gone on a nationwide tour around China.

In terms of solo music, Jackson partnered with Sublime Artist Agency and released an array of singles including 'LMLY', 'Alone', 'Drive You Home,' and most recently, his self-titled Mandarin single.

While it's been relatively radio silence on the music front, Jinyoung has been keeping busy starring in some of 2021's top K-dramas.

Since signing to BH Entertainment, the singer has been pursuing his passion for acting. In 2021, Jinyoung starred in the dystopian series The Devil Judge and the romance drama Yumi's Cells.

But of course, Jinyoung couldn't let the year go without some new tunes. Dedicated to his fans, the singer dropped his surprise single 'DIVE' which he shared revolves around his love for the sea and the theme of self-belief.

"I wanted to gift my fans with music soon, and I worked on it little by little in my spare time in order to keep the promise. Thank you so much for waiting, and I'll continue to repay your love] with music like this," he said in a statement.

In the last year, Youngjae's been exploring varied avenues of his talents, be it music or acting.

Since leaving JYP Entertainment, the singer signed with Sublime Artist Agency and soon starred in Netflix's first-ever Korean sitcom, So Not Worth It. Youngjae also starred in the romance musical Midnight Sun: The Musical alongside other K-pop acts SHINee's Onew, DAY6's Wonpil, and NU'EST's Baekho.

Beyond acting in K-dramas, the 'Vibin' hitmaker also performed on several OSTs in the last year including 'Pop Star' from So I Married an Anti-Fan and 'You & I' with Laboum's SoYeon from My Roommate Is A Gumiho.

In terms of his solo music, Youngjae released his well-received mini-album COLORS from Ars where he showcased a spectrum of emotions and artistry. The singer also released a Christmas-themed single 'Walk With Me'.

BAMBAM had a busy year. From releasing a vibrant EP to collaborating with some of the world's biggest brands, the Thai rapper has not stopped moving.

With no signs of slowing down, BAMBAM is currently en route to release his sophomore mini-album, B. The upcoming record features six tracks, including a collaborative track with Red Velvet's Seulgi titled 'Who Are You' and 'Slow Mo' which was co-written by American act Pink Sweat$.

Wanting to delve into more aspects of his artistry, the rapper is also said to have co-written all tracks on the mini-album.

Beyond music, BAMBAM was announced as the newest ambassador of the popular role-playing game Sims 4 and most recently, was also chosen as the global ambassador for the NBA team Golden State Warriors.

While Yugyeom may be the youngest out of the group, the singer did not hesitate to showcase his power as a solo act. From the get-go, the 24-year-old came out swinging with a dance cover of 'FRANCHISE' by Travis Scott, Young Thug, and M.I.A to announce him joining one of Korea's most coveted labels AOMG.

Under AOMG, Yugyeom released his EP, Point Of View: U which featured a star-studded lineup of collaborators including GRAY, Loco, DeVita, Jay Park and punchnello. The 'I Want U Around' act also performed at the label's first-ever online concert last August.